The Way Immigration Used to be Done

I dare say that everybody reading this article is mostly likely an immigrant or a descendant of an immigrant. I am. My grandparents were born in Italy. They came to America dirt poor and raised 23 children, all of whom became productive members of this great nation.

The Left wants to paint opposition to what we’re seeing at the border as anti-immigration. This is typical of the Left. Moreover, a number of conservatives have jumped on the immigration bandwagon describing what’s taking place in border towns as xenophobia – fear of foreigners.

Glenn Beck wants to bring soccer balls to the children who have made their way to the United States.

I’m all for compassion. But this great influx of immigrants is different. There’s no accountability.

There’s a proper way to do immigration. Most Americans would agree.

Here’s a picture of my father’s family. He’s the little guy with the white leggins. There would eventually be 11 DeMarios (DeMar): 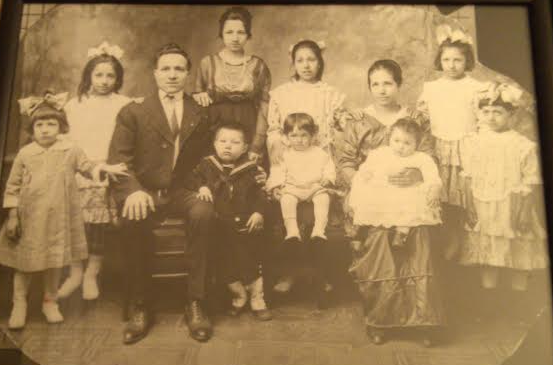 Joseph and Rose DeMario and Family

There’s a scene from the film The Godfather II that shows a young Vito Andolini Corleone coming to America to escape an almost certain death in Italy. Here’s how Kevin Hagopian describes the scene:

“It is 1901. A small boy, waifish and wide-eyed, is hustled through the organized chaos of Ellis Island, the chorus of exotic languages echoing in the Great Hall bewildering him. A brusque attendant mishears an interpreter, and the boy, Vito Andolini, is assigned as his surname the name of the town he has fled from, Corleone, Sicily. From Ellis Island, the skyline of New York City beckons the rabble of immigrants we have earlier seen sailing beneath the open arms of the Statue of Liberty. New York’s skyscrapers are temples of modernity, a symbol of a new world of security that the boy’s fearful friends pray can replace the medieval vengeance plots and brutal feudal loyalties of Sicily. Sicily, where the blood of the boy’s family has been shed in torrents. Sicily, where the boy himself is under an unappealable death sentence. But Vito Corleone can only glimpse New York from across the water. Quarantined with smallpox, he is placed in isolation.”

This scene from The Godfather II is worth watching. Send it to your Congressman and Senators. It’s an accurate depiction of how immigration used to be handled:

America used to have a system. All were welcomed. There were rules to follow. Even someone on the run from killers like young Vito followed the rules.

There Shouldn't be any Crying in Soccer

The Way Immigration Used to be Done