Here are the opening paragraphs:

“Some congressional Republicans remain determined to cut off federal funding for Planned Parenthood, but a nationwide USA TODAY/Suffolk University Poll finds Americans back government support for the group by more than 2-1.

“Two-thirds of those surveyed, 65%, say funding should continue for the group, which provides contraception, cancer screening and other health services to women; 29% say it should be cut off.”

When Planned Parenthood is described in the above manner, then of course a majority of people are going to support the organization. It’s like asking people if they would support free healthcare, housing, and education. Only the economically knowledgeable, who know that nothing is free, would answer in the negative.

Nowhere in the article do we find what questions were asked. Instead of asking whether a person supports a group that “provides contraception, cancer screening and other health services to women,” why not ask this question?

Do you support a group that supports killing unborn babies and sells their body parts?

It would add realism to the question by showing a picture like this taken from an undercover video exposing the bloody business of Planned Parenthood: 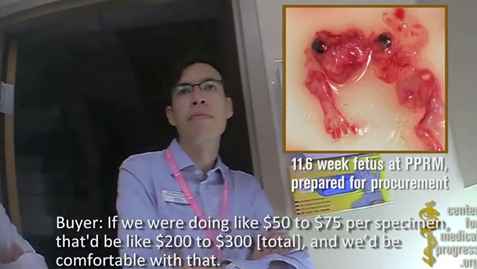 Then ask this question if the answer is “no”:

Do you believe that your tax dollars — $500 million per year – should keep funding an institution that kills unborn babies and sells their extracted body parts?

I bet the poll results would be very different if an honest poll had been taken. Next time, let me ask the poll questions.