Rewriting the History of Same-Sex Sexuality with John Boswell

Finding justification for perversion is a full time job these days. every effort is being made to make the unnatural, illogical, and immoral into a celebration of pride. First there were just homosexuals and heterosexuals. Now there is a full array of sexual types that we will be forced to acknowledge under the penalty of law and forced red-education programs.

This has all taken place because of a full scale revision of moral thought and history.

Consider John Boswell, an admitted homosexual who died from AIDS. For years Boswell had been trying to prove that homosexuality is supported by the Bible. He tried to make a case for homosexuality in his poorly argued Christianity, Social Tolerance, and Homosexuality.

Boswell entered the debate a second time in 1994 with Same-Sex Unions in Premodern Europe. In this bit of revisionist historiography, Boswell claimed that “sexual relationships that have long been condemned as sinful by the church were once tolerated, even blessed.”1

The folks at The Huffington Post resurrected Boswell’s historical fiction with a digital version of the book. The printed version of Boswell’s warped historiography got a thorough thrashing in 1994. The only thing that’s changed is that the media are ferociously pushing all things homosexual.

This is from Annalee Newitz:

“Gay marriage sounds like an ultra-contemporary idea. But almost twenty years ago, a Catholic scholar at Yale shocked the world by publishing a book packed with evidence that same-sex marriages were sanctioned by the early Christian Church during an era commonly called the Dark Ages.”

Robert F. Taft, of the Pontifical Oriental Institute in Rome, stated that “Boswell has discovered nothing.” In Taft’s analysis, Boswell has simply reinterpreted certain liturgical rituals that were designed as celebrations of “brotherhood” or “fraternity” that were “used for reconciling warring siblings, for adoptions and for establishing other fictive relationships.”2

John Boswell equates love for one’s brother to be a cryptic literary allusion to a homosexual union. Thus, Boswell approaches these texts with a homosexual predisposition in mind. Brotherly love becomes same-sex sex. Bizarre, but expected.

Even Camille Paglia, a pro-homosexual advocate, was not persuaded by Boswell’s argument:

“Boswell’s treatment of the Middle Ages, ostensibly his specialty, is strangely unpersuasive. Indeed, he seems grotesquely incapable of imagining any enthusiasm or intimate bond among men that is not overtly or covertly homosexual. … The cause of gay rights, which I support, is not helped by this kind of slippery, self-interested scholarship, where propaganda and casuistry impede the objective search for truth.”

If these medieval rituals were designed for same-sex unions, then why, Taft asks, was homosexuality “punishable in church law by two or three years’ penance, and in civil law by torture, castration and even execution”? Other critics were equally suspicious of Boswell’s highly biased study.

Federal Judge John T. Noonan, Jr., who has authored historical studies on contraception, divorce, usury, and bribery, dismissed Boswell’s book as a “curious attempt to create for himself a past in a church whose Scriptures and teachings never accepted the relationships he defends.”3

While Newsweek at least published the opinions of those who disputed Boswell’s thesis, USA Today distributed an editorial by Deb Price, at the time a columnist for The Detroit News and Los Angeles Times, with no rebuttal. Price assumes that Boswell’s historical work is accurate and his interpretations sound. Based on an ill-informed and equally biased acceptance of Boswell’s thesis, she then writes that “Every church and courthouse should welcome gay couples prepared to take public vows.”4

I find all of this very curious. Why is it that homosexual advocates scorn the church when it condemns their lifestyle, claiming that “religion and politics do not mix,” and then praise an edict they believe is sanctioned by the church when it supports their position? Of course, the answer is obvious. They are hypocrites.

Let’s assume, for the sake of argument, that Boswell’s interpretation of these twelfth-century liturgies is accurate, that the Roman Catholic Church did sanction homosexual unions. So what? The Roman Catholic Church also prohibits priests from marrying and has created a female monastic order of “nuns,” neither of which is biblical. Homosexual advocates like Boswell and Price are selective in what they decide to glean from the church. This is why the homosexual issue must be debated in terms of biblical law not Roman Catholic Canon Law.

If the Roman Catholic Church is wrong about priests, nuns, Mariology, penance, purgatory, and other non-biblical doctrines, then why should we accept what the church might have taught in the twelfth century concerning homosexual unions?

If Boswell handles these medieval texts in the same way he handled the Bible in Christianity, Social Tolerance, and Homosexuality, then we all have reason to question his scholarship. Boswell was a respected scholar because of his academic credentials.

Boswell tried to make the case that the relationship between David and Jonathan in the Bible was homosexual. Let’s suppose Boswell is right. There is a difference between “descriptive” and “prescriptive” moral norms. Just because someone in the Bible does something does not mean the behavior is lawful.

Prescriptive morality: “You shall not commit adultery” and “you shall not lie with a male as one lies with a female; it is an abomination” (Lev. 18:22). 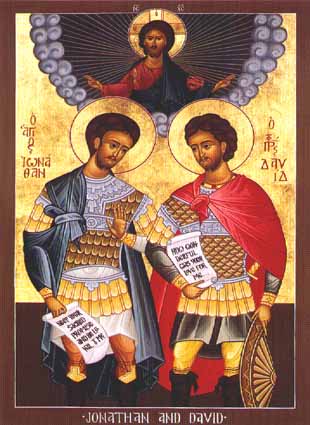 David committed adultery and was an accomplice to murder in the death of Uriah the Hittite. So, considering Boswell’s argument, we add to these the sin of sodomy.

Are homosexuals ready to acknowledge that adultery and murder are also normative behavior for Christians because David engaged in both of them?

John Boswell’s book is as misinformed and propagandistic today as it was in 1994.

How World War I Changed Everything

How the Second Amendment Will Stop Jihad in America Unless. . .

Rewriting the History of Same-Sex Sexuality with John Boswell