We are learning from MIT economics professor Jonathan Gruber, one of the principal architects of Obamacare, that the new healthcare law was sold to the American People by lying to them. If the American people had known what Obamacare was really all about and how it would be implemented and how much it would cost, they most likely would not have supported it.

Professor Gruber has said that he and Obama and Co. had to lie to get it passed by a Democrat-led Senate.

“Lack of transparency is a huge political advantage,” Gruber said in a viral video. “Basically, call it the stupidity of the American voter or whatever, but basically that was really, really critical to getting the thing to pass.”

Obamacare was sold to the American people on the promise that many people would get free healthcare and a typical family carrying insurance would have their premiums reduced by $2500 per year. How was this going to happen unless someone else was going to have to pay more in order for other people to pay less?

While something might appear to be free (e.g., education, healthcare, housing, etc.), there is always a cost to someone. Ignore this law, and all economic hell breaks loose. Of course, politicians believe they can ignore and break any law. They believe they can create economic prosperity ex nihilo, “out of nothing,” simply by legislating it.

“You can’t subsidize 30 million uninsured without someone paying something. Indeed, Gruber admits, Obamacare was a huge transfer of wealth — which had to be hidden from the American people, because ‘if you had a law which . . . made explicit that healthy people pay in and sick people get money, it would not have passed.’”

Nancy Pelosi is claiming that she never heard of Jonathan Gruber and that he didn’t have anything to do with the development of Obamacare. This, too, is a lie.

The guy even has a comic book about the great benefits of Obamacare where the lies are front and center. Take a look at this two-page spread: 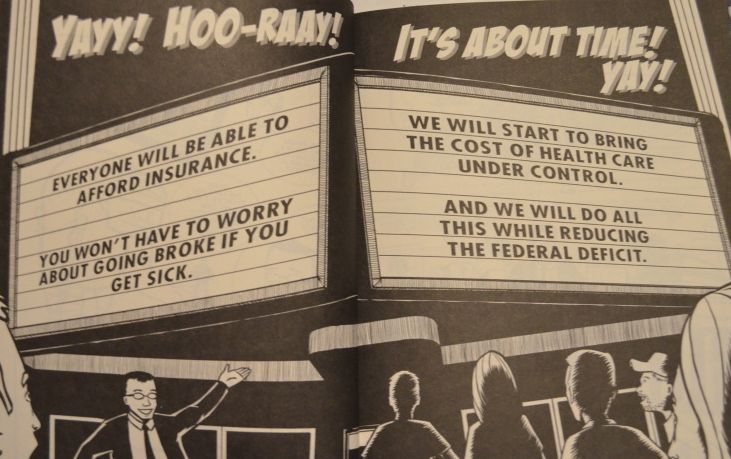 We now come to the fraud portion of the scam of Obamacare. Charles Krauthammer writes in National Review Online:

“Gruber said the bill’s authors manipulated the nonpartisan Congressional Budget Office, which issues gold-standard cost estimates of any legislative proposal: ‘This bill was written in a tortured way to make sure CBO did not score the mandate as taxes.’ Why? Because ‘if CBO scored the mandate as taxes, the bill dies.’ And yet, the president himself openly insisted that the individual mandate — what you must pay the government if you fail to buy health insurance — was not a tax.”

If a private company had sold a financial product the way the Democrats did in getting Obamacare passed, the directors would be arrested, tried, and sent to prison for a long time.

Madoff created investment programs that were little different from government programs. He’s in jail, and Obama and the Democrats are still in office defrauding the American people by the force of law.

Hispanic Reporter Gets Schooled when She Pulls the Race Card