Liberals fear that Americans will wake up one day and ask this question: “Why are we sending our children to schools that are run by the government and students are being taught to love Big Brother, including how to accept same-sex perversion?” Liberals know that our nation’s schools are the breeding ground for their statist worldview, and they salivate over the prospect of indoctrinating a new generation of obedient servants to the statist cause.

This is all accomplished free of charge! In fact, parents are actually paying for the worldview destruction of their children.

With the latest ruling by the Supreme Court on same-sex marriage, your children will be indoctrinated in the new sexual faith. Douglas Wilson writes:

“If your children remain in the government schools, there is now no legal way for them to be taught any normal view of human sexuality. And, depend upon it, they will be taught the other kinds. And second, they will be taught an approach to civics that sees nothing wrong with the Supreme Court’s juridical putsch here, and that is just as worrisome.”

Don’t think you’re going to turn the government schools around. Conservatives have been trying to do it for more than 50 years. The schools have only gotten ideologically worse, more expensive, and federally controlled by a multi-billion dollar bureaucracy.

Many will argue, “Well, the schools where my children attend are different.” Maybe in degree they are. Keep in mind that the parents of children of the schools that are supposedly not as good as yours are saying the same thing about their schools.

There’s this from the National Education Association – the national liberal teacher’s union: 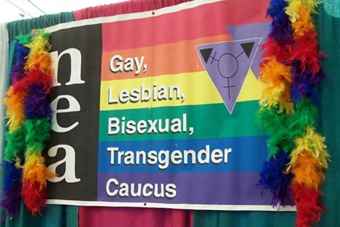 Then there’s this from the United States Department of Education ’s site in “celebration” of the pro-same-sex marriage decision of the Supreme Court: 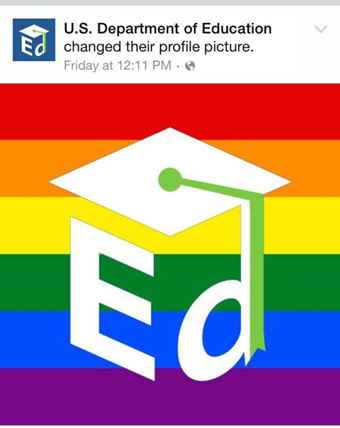 Government (public) schools are officially pro-homosexual. Get your children out now while you can. If you won’t do this necessary thing, then you are not ready for the battle that’s coming.

In 2007, I wrote the book Whoever Controls the Schools Rules the World. In it I pointed out that every change in worldview was brought about through the educational establishment. Our founders understood this. That’s why they established their own schools (e.g., Harvard, Yale, Princeton, etc.), and that’s why liberals took them over. They knew that by capturing these prestigious and influential institutions they could affect every area of life without ever firing a shot.

From the time a child enters kindergarten, he learns directly and indirectly that he is indebted to the State and looks to the State for sustenance.

As long as parents continue to send their children to government schools, liberals will have a stranglehold on the nation. We won’t see any appreciable change in the direction of the nation until parents realize that the false premise of “free education” is a self-destructive delusion.

Liberals count on conservatives, libertarians, and constitutionalists to send their children to the local government school system. They’ll be able to indoctrinate future statists for six hours each day, five days each week, for ten months each year for 13 years.

Your children will spend more time with strangers than with you for 13 years of their lives. They will learn what other people are required by law to teach them. You’ll get them a few hours each evening (if they’re not doing homework) before they go off to bed for at least 8 hours of sleep to repeat the indoctrination all over again.

Government schools are indoctrination centers. The liberals know it; that’s why they continually demand more money for their support and work continually to control every aspect of the curriculum.

If you want to strike fear in the liberal establishment, abandon the government schools. Will you have to sacrifice? Yes. Better to sacrifice now than to pay a steeper price later.

Liberals talk claim they are “doing it for the children.” They are doing it to control the children. Let’s take the control of the future away from them.

Do it now while you have the freedom. Do it before it’s too late.