Frito-Lay has joined in the promotion of same-sex sexuality with its new rainbow-colored Doritos. We saw the same thing when Burger King and the maker of Oreos chose rainbow-themed advertisements for their products.

Let’s say what it is. The rainbow is being used as a fig leaf to cover up a sexual perversion. Homosexuality is not about love; it’s about a sex act. How does a rainbow represent two men copulating with one another? It doesn’t.

Someone new to the homosexual rights debate would never make a connection between a rainbow and a sex act. When advertisers want to use sex to sell a product, they generally put a pretty girl or a handsome guy in the ad. People get the connection. As they say, sex sells.

If you’ve ever seen advertisements for same-sex cruises, you know what’s going on. They are using “gay” sex to sell “gay” cruises. Rainbow flags are conspicuously absent.

Why doesn’t Frito-Lay show images from “Gay” Pride Parades? The company is promoting the “Dallas Pride Event.” Surely we’ll see some photos from the event in a future Doritos advertising campaign. Maybe men wearing oversized Doritos to cover their private parts. Show seven men in a Conga line, each with a different colored Dorito chip. I bet that would sell a lot of Doritos.

Read more: “The ‘Gay’ Oreo and the Stupidity of Kraft Foods.”

It’s time that homosexuals and their commercial supporters like Frito-Lay, the makers of Doritos, have a truth moment by explaining to the consuming public just what they are promoting.

The makers of Doritos are required to list the ingredients that go into making their products.

If the Frito-Lay company is going to support same-sex sexuality with its products, it’s time that the company includes what “gay” people do and the disease effects of the practice among males. 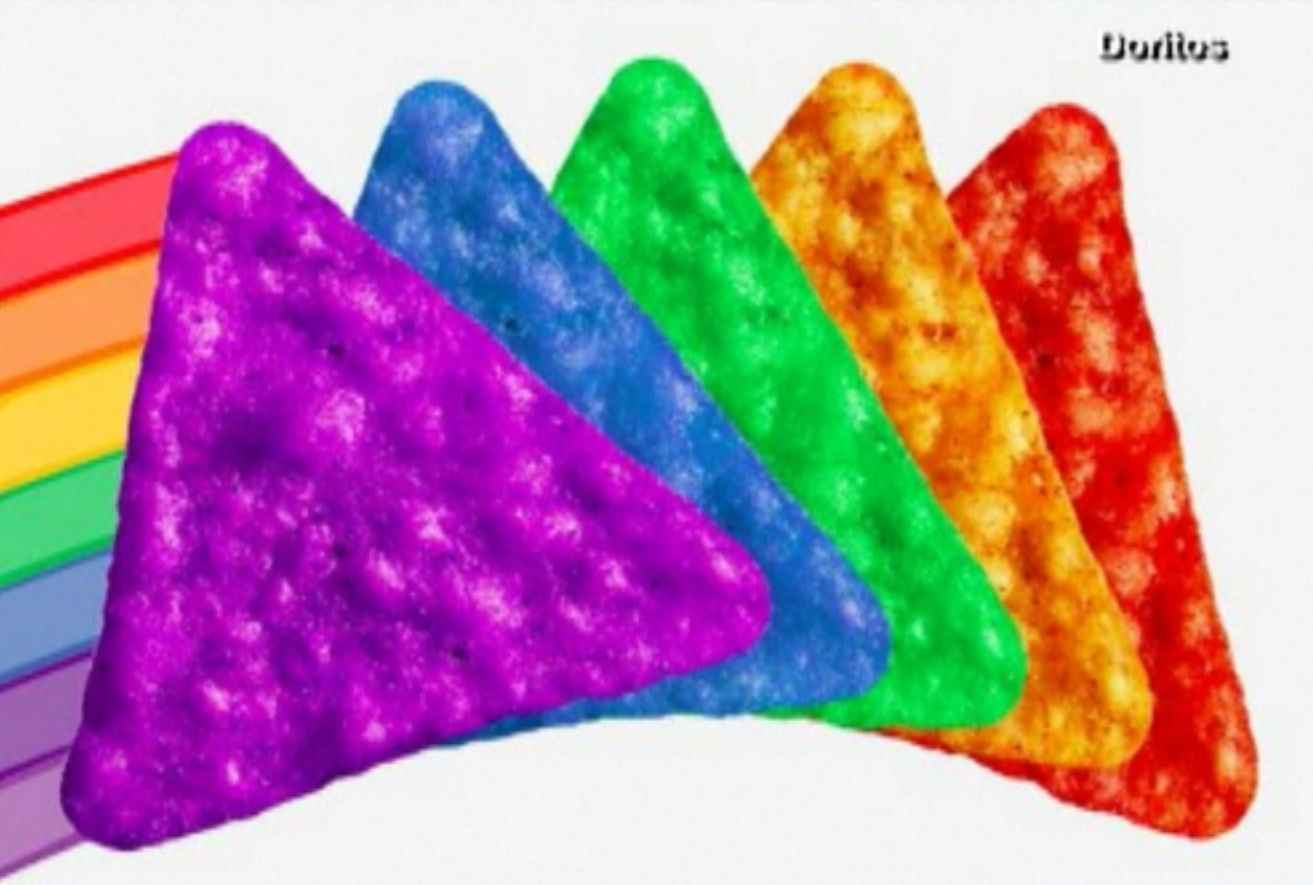 Yes, a rainbow is pretty, but what does it have to do with men having sex with men?

If Frito-Lay is going to promote a sexual lifestyle choice, shouldn’t the company be required to list the ingredients and the potential dangers of the practice?

And one more thing. The rainbow chip campaign is being used to support, as John Nolte at Breitbart is reporting, “It Gets Better, a non-profit group started by the infamous anti-Christian bully and bigot Dan Savage.” Here’s a little something from Mr. Savage that I bet no one at Frito-Lay wants to get out:

“Savage has demanded Republican presidential contender Ben Carson to ‘suck his dick.’ He’s demanded the same from Republicans Herman Cain and Mike Huckabee. Savage went on a smear campaign against Rick Santorum to destroy Santorum’s reputation in Google searches. The hate Savage has hurled at conservative Christians is practically endless.”

Frito-Lay needs to come clean with some real truth in advertising by telling the public why someone like Dan Savage should be supported.

“[Savage] followed up that charming spectacle by stating he wanted to ‘f*** the s*** out of Rick Santorum.’ He said that Republican gays were ‘f*ggots’ who ‘grab their ankles, right on cue.’ He tried to slander Saddleback Church Pastor Rick Warren by Google bombing a self-coined term, ‘saddlebacking,’ meaning ‘the phenomenon of Christian teens engaging in unprotected anal sex in order to preserve their virginities.’ He said in 2006 that Green Party Senate candidate Carl Romanelli ‘should be dragged behind a pickup truck until there’s nothing left but the rope.’ He said in 2011, ‘I wish the Republicans were all f***ing dead.’”

Be nice if you call. State your displeasure. You can ask if the company knows who Dan Savage is and some of the awful things he has said. Don’t fight with the person answering the phone.

I haven’t been able to find an email address for Frito-Lay. Here are some social media sources: Snack Chat blog, www.snacks.com, on Facebook at www.facebook.com/fritolay, and on Twitter at www.twitter.com/fritolay

Kid With Bomb-Like Device Gets Invited to White House

By Liberal Standards, What's Wrong if Obama is a Muslim?