By Liberal Standards, What’s Wrong if Obama is a Muslim?

Why are liberals upset that Donald Trump didn’t correct a questioner who claimed President Barack Hussein Obama is a Muslim? What is wrong with being a Muslim? Liberals love Muslims. They elect them to office. They are in high level government positions. Being Muslim is really in. So what’s the problem?

Here’s how CNN reported the incident:

“‘We have a problem in this country. It’s called Muslims,’ an unidentified man who spoke at a question-and-answer town hall event in Rochester, New Hampshire asked the mogul at a rally Thursday night. ‘You know our current president is one. You know he’s not even an American.’” 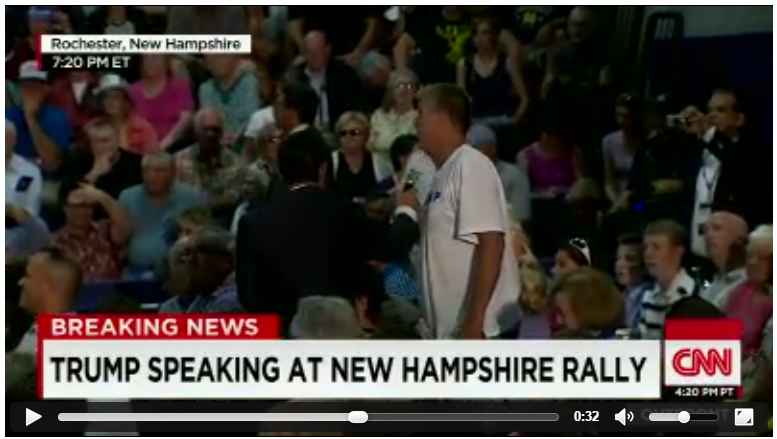 The media went crazy because Trump “did not correct the questioner about his claims about Obama before moving on to another audience member.” They thought this would be the last straw for Trump’s candidacy. It wasn’t. It only drove liberals, Hillary, the media, and GOP insiders insane:

“The audience member’s comments and Trump’s response were quickly denounced by Democrats. Hillary Clinton, the party’s front-runner for president, personally tweeted late Thursday that Trump’s remarks were ‘just plain wrong,’ and followed up on it Friday morning at a press conference.

“‘I was appalled,’ Clinton said bluntly to a question from CNN’s Suzanne Malveaux. ‘Not only was it out of bounds, it was untrue. He should have from the beginning corrected that kind of rhetoric, that level of hatefulness.’”

It’s my understanding that it was some of Hillary’s supporters during the 2008 campaign that perpetuated the rumor that Obama was not a United States citizen and therefore ineligible to be President. There is no evidence that she ever denounced them.

So what if President Obama is a Muslim? What’s all the fuss? “Democrat Rep. Andre Carson (D-IN), the second Muslim to be elected to Congress, said Trump’s action[s] were ‘not only intentional’ but also ‘insidious.’”

I don’t doubt that Trump’s failure to correct the questioner was deliberate.

Liberals know that we have a Muslim problem in the United States and voters are anxious about it. The Democrats are stuck. To comment on our nation’s Muslim problem would label the Democrats as “intolerant” and ruin the false belief that Democrats care about everybody. It’s those mean conservatives who have a problem with people who are different.

Actually, conservatives only have a problem with people who have designs on dismantling those elements of our nation that made us the envy of the world.

Obama is ding everything he can to make that dismantling a reality, like nominating openly gay civilian secretary Eric Fanning to lead the Army.

By Liberal Standards, What’s Wrong if Obama is a Muslim?