Does the Mess We’re In Today Make You Yearn for the Good Old Days?

Some years ago, I wrote an article about how earthquakes were not a sign of the last days and the soon coming of Christ. I received the usual pile of vitriolic email. Words like “stupid,” “lukewarm,” and “heretical” were thrown about.

When I set forth my position, answering them point by point, they tell me that they don’t want to debate; they just know I’m wrong. The most interesting response came from a 62-year-old woman who believes in something called the “Good Old Days.” Here’s what she wrote:

You know it doesn’t take a rocket scientist to know this world is in terrible, terrible shape. The people have become wicked in my 62 years, going from my childhood when you could leave your doors open day and night and not worry about anyone coming in that didn’t belong in that house. When children could walk to the corner grocery store and buy a Coke for 5 cents. Teenage girls could walk home from school or a girl friend’s house after dark and not have to worry about being forced by some pervert into a car or behind a building to be raped and killed. When we as kids could play dolls, jump the rope, hopscotch, the boys playing with cars or marbles and we dreamed to big things when we grew up. Yes, those were the good old days. And you know something, we could still reach the American Dream and help our neighbors as we reached it. Mr. DeMar, I don’t know how old you are. I do know you have showed how stupid you are, and that you are teaching false doctrine from the Bible or maybe you teaching false doctrine from a false Bible. Either way, Jesus is coming very soon. I’m not going to quote any Scriptures. There are too many to prove you wrong. Satan has you bound and your eyes blinded. I pray God will send the Holy Spirit to you to reveal that you have been deceived, that your eyes will be opened wide so you will know without a doubt that we’re in the very last days before our Jesus returns.

The writer of Ecclesiastes puts the past in perspective when he writes: “Do not say, ‘Why is it that former days were better than these?’ For it is not from wisdom that you ask about this” (Ecclesiastes 7:10). Matthew Henry’s (1622-1714) comments on this passage are helpful: “The supposition is a foolish reflection upon the providence of God in this world…. One is so much a stranger to the times past, and such an incompetent judge even of the present times, that he cannot expect a satisfactory answer to the inquiry and therefore he ‘does not enquire wisely.’”

The following video is from the film Damn Yankees showing the devil lamenting that the Good Old Days are no more.

Authors Carl Olof Jonsson and Wolfgang Herbst write, “Perhaps because we are to such an extent ‘strangers to the past,’ we easily read into the events of circumstances of our own day a distinctiveness and uniqueness that may not actually be there.”1 Our memory of the past is selective. We tend to block out the bad and remember only the good. Television shows like Leave It to Beaver and Father Knows Best are not accurate interpreters of the past:

[Gary] Ross believes, “Each era has its own false nostalgia. We all put a picket fence around something. For my generation it was the fifties, and for other generations it will be something else.” Certainly, those of us born after the fifties cannot imagine returning to a place and time we never visited except through reruns. Perhaps conservatives and Christians are calling America to return to a place that only existed in the movies, on television, in Hollywood’s version of history.2

The following is my response to the woman who prefers the Good Old Days. You mention dolls and automobiles. My mother grew up without ever having a doll or the ability to buy one. There were no supermarkets in her day. My father told us how he had to walk to get a 50-pound bag of flour so his mother could make bread and pasta for the family. Baking took all day. I can remember the mechanical washer and wringer that my grandmother used to wash clothes. Wet clothes were hung outside on a line to dry. Yes, those were the good old days of drudgery, sun up to sun down chores that never went away.

You mention houses with doors and locks. Do you realize how modern it is even to own a home with indoor plumbing and central air and heating? The light bulb was invented in 1879. Before that time, it was candles, kerosene lamps, and dangerous natural gas.3

Travel was no easy. Until trains, the fasted way to travel on land by horse, something that continued into the 20th century.

You sent me an email that I received in seconds. No paper, stamp, envelope, or postman needed. Not a single science fiction writer ever conceived of the internet. Packages can be delivered overnight. In some cases, the same day an order is made.

Then there’s the telephone, first invented by Alexander Graham Bell in 1876. Now we have cell phones that are more capable than the computer that was used to send men to the moon. Ask your grandparents about party lines.4

The Galveston hurricane of 1900 killed 8000 people. Katrina killed a few hundred. What made the difference? We have technology that can track storms. You and I can turn on the Weather Channel and see the path of the eye of the storm. Modern-day transportation makes mass evacuations possible. In 1900, there was no way to know how powerful a storm might be and no way to escape it. Technology could have saved the lives of those caught in the December 24, 2004 tsunami that hit the west coast of Indonesia with an ocean warning system.

Humorist P. J. O’Rourke says, “When you think of the good old days, think ‘dentistry.’” Gary North writes, “The greatest invention of the modern world is anesthetics. Prior to 1844, in preparation for an operation, you drank booze until you passed out—hopefully. Then the physician — ‘sawbones,’ he was called — got started hacking away.”

You can have the “good old days” of just a hundred years ago:

More than 95% of all births in the U.S. took place at home. Jimmy Carter was the first president born in a hospital.

What’s one of America’s most publicized health risks? Obesity! We have too much food. What a great problem to have. The diet industry in America is a multi-billion-dollar business.

What was life like before the polluting automobile? Great pains are being taken to rid our air of exhaust pollutants. This is certainly a good thing. But compared to the donkey and horse, the animals Jesus and Paul rode (Matt. 21:7; Acts 9:4), the automobile is a non‑polluter.

Dixy Lee Ray (1914–1994), former governor of the State of Washington, recalls that as a child, the world in which most Americans lived “was a very smelly place. The prevailing odors were of horse manure, human sweat, and unwashed bodies. A daily shower was unknown; at most there was the Saturday night bath.”6

Indoor plumbing was a luxury. Only a few main streets were paved, usually with cobblestone or brick. Automobiles were few and far between. Long-distance travel was by rail. Refrigeration was unheard of. If you wanted to get around, you had to have literal horsepower and the pollution that went with it.

Sanitary experts in the early part of the twentieth century agreed that the normal city horse produced between fifteen and thirty pounds of manure a day, with the average being something like twenty‑two pounds. In a city like Milwaukee in 1907, for instance, with a human population of 350,000 and a horse population of 12,500, this meant 133 tons of manure a day, for a daily average of nearly three‑quarters of a pound of manure per person per day. Or, as the health officials in Rochester calculated in 1900, the 15,000 horses in that city produced enough manure in a year to make a pile covering an acre of ground 175 feet high and breeding sixteen billion flies.7 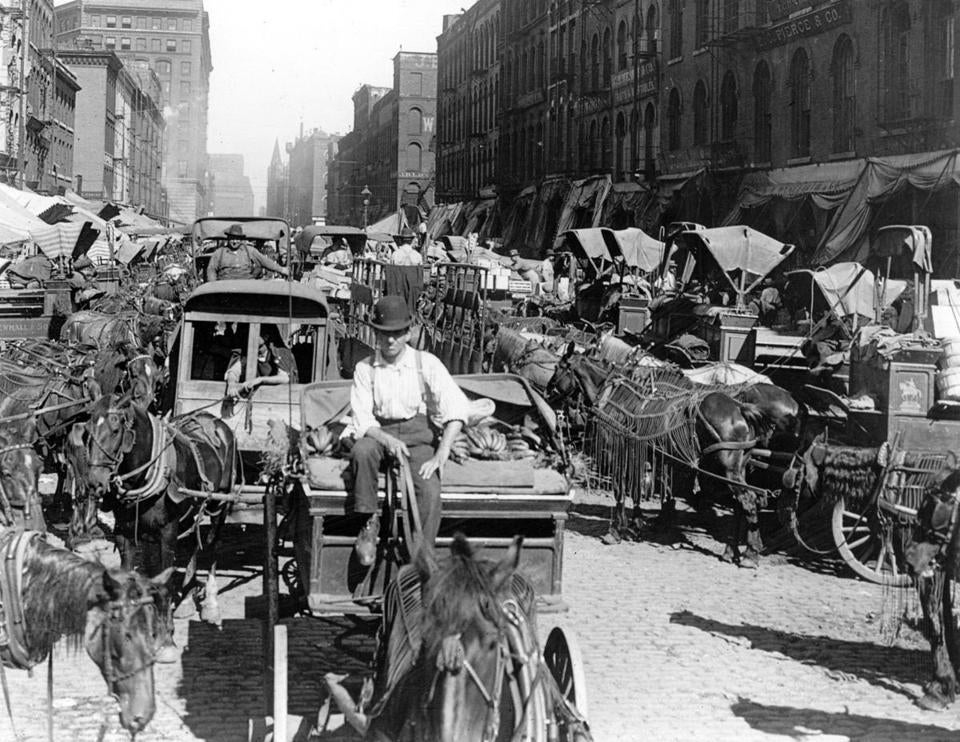 The horse population of Chicago was 83,000, and this was after the automobile and electric streetcar had caused a decline in the number of urban horses. In 1880, the cities of New York and Brooklyn had a combined horse population somewhere between 150,000 and 175,000. As one can imagine, keeping the streets clean was a major problem. Some suggested that epidemics of cholera, smallpox, yellow fever, and typhoid were caused by “‘a combination of certain atmospheric conditions and putrefying filth,’ among which horse manure was a chief offender.”8

The cost of keeping the streets clean was expensive. Some cities tried to recoup the cost by selling the manure for fertilizer. This caused another unforeseen problem since collecting manure was more profitable than collecting regular trash. Daily refuse often remained in the streets along with the leftover manure. What they wouldn’t have given for a garbage truck and a landfill back then.

Streets turned into cesspools during inclement weather. Women with long skirts suffered the worst of it. Dodging street cleaners was another hazard. There was no relief during the summer when people had to endure breathing pulverized horse manure. Modernized roads were of little help. “The paving of streets accelerated this problem, as wheels and hoofs ground the sun‑dried manure against the hard surfaces and amplified the amount of dust.”9 And there was the problem that the Atlantic Monthly described in 1886 to the theater-going public in New York City as “dead horses and vehicular entanglements.”

None of this means that we’ve entered a utopian era. There are many things that need improvement. There are still war zones in the world. Compare this to two world wars, the Korean War, and the Vietnam War in the 20th century. There is no longer a military draft. Islam is a problem, but it’s been a problem for more than a thousand years.

There’s a great deal of moral depravity. But there’s always been. Politics is a 50-50 proposition today. Much of that could be remedied if more Christians and conservatives voted. Voter turnout is dismal among conservatives. The claim has always been that athere’s not a dime’s worth of difference between the two parties. There’s enough difference to make a difference.

It doesn’t help when people claim “we’re in the very last days before our Jesus returns.” People have been making this prediction for nearly 2000 years. It was a standard claim in the 20th century. Mussolini was the antichrist, Hitler was the antichrist, Stalin was the antichrist. The rapture was to happen in 1988, 40 years after Israel became a nation again. Then it was 70 years (2018).

Is Working With a Foreign Nation to Win an Election Unconstitutional or a Crime?

Does the Mess We’re In Today Make You Yearn for the Good Old Days?