Manchin presents himself as a conservative. While he’s more conservative than most Democrats, he’s still a Democrat. Manchin has been double-dealing on the topic of abortion. There was a vote in the Senate, and Manchin voted to keep supporting the pro-abortion organization Planned Parenthood with a half-billion dollars of taxpayer money.

[D]uring a radio interview defended forcing taxpayers to fund the Planned Parenthood abortion business. Manchin claims that none of the taxpayer funds the abortion business receives actually goes towards abortions.

In an interview with Hoppy Kercheval on MetroNew’s Talkline this morning, coming after a Friday vote in which he forced taxpayer to fund Planned Parenthood once again, Senator Manchin completely glosses over the fungibility issue. That is the understanding that, even though the funds may not directly pay for abortions, the taxpayer funding helps the nation’s leading abortion company by helping it fund everything associated with performing and promoting abortion such as salary, expenses, advertising etc. (LifeSite News)

If Planned Parenthood didn’t receive stolen money from taxpayers to fund its baby-killing business, the organization would have to get the money from somewhere else. Anyone with half a brain should be able to see through Manchin’s very bad excuse for voting to keep taxpayer funding for Planned Parenthood’s bloody business.

Can you imagine the hue and outcry from liberal groups if an organization that received federal funding for facilitating adoptions but denied adoptions to same-sex couples? What if that organization claimed that all the taxpayer money it received only went to adoptions and that none of it went to its anti-same-sex advocacy position?

Again, Manchin is assuming that the majority of West Virginia voters are stupid. Maybe they are. We’ll find out in November when they can vote to throw out the hypocrite. Take a look at this: 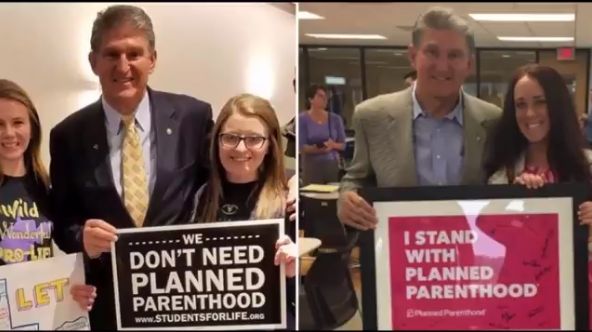 “Liberal Joe Manchin can’t hide from his record of voting five times to side with pro-abortion radicals in Washington to send taxpayer dollars to the nation’s largest abortion provider. West Virginians overwhelmingly do not want their tax dollars going to abortion providers, but liberal Joe Manchin has proven that he would rather side with pro-abortion Hillary Clinton and Washington liberals, than stand with West Virginians for the sanctity of life.”

A vote against Manchin and for Morrisey is a twofer: (1) The GOP picks up a Senate seat and (2) we’re one vote closer to defunding Planned Parenthood.

If Planned Parenthood wants to keep killing unborn babies, there’s a lot of pro-abortion money in Hollywood. Chelsea Clinton, who has said that from 1973 to 2009 abortion “added three and a half trillion dollars to our economy,” would be honored to write the organization a fat check to keep the organization in the bloody business of abortion. “In response to tweets critical of her remarks, Chelsea Clinton declared that “Pro-choice is Pro-life” and that ‘Reproductive rights have always been about economic rights.'”

Friends, this is more than a dime’s worth of difference between Republicans and Democrats. Her mother almost became President.

Does the Mess We're In Today Make You Yearn for the Good Old Days?

An Answer to Progressivism in Less than Three Minutes