Dr. Ben Carson was asked by NBC’s Chuck Todd a question from a Facebook poster named Victor Roush, “Does the Bible have authority over the constitution?” It was posed as a “simple question.”

Here is what Dr. Carson said:

“That is not a simple question by any stretch of the imagination. I think probably what you have to do is ask a very specific question about a specific passage of the Bible and a specific portion of the Constitution. I don’t think you can answer that question other than out of very specific contexts.”

Given the time Dr. Carson had to answer this “simple question,” it was a good response. I believe Chuck Todd was surprised by the answer. He did not ask a specific follow up question on how the Bible and the Constitution relate in terms of a specific example.

There is very little moral law in the Constitution. For example, there are no prohibitions against murder, rape, theft, or slavery. The greatest authority mentioned in the Constitution is “We the people. . .” Today it’s “We the five Justices of the Supreme Court. . .” There is always going to be an outside source for moral decision making. 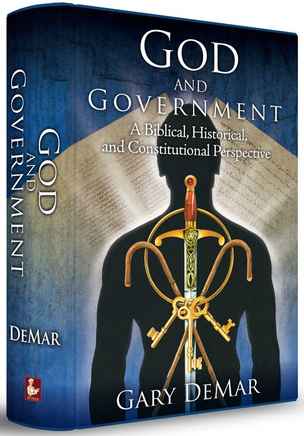 “Our liberty depends on our education, our laws, and habits… it is founded on morals and religion, whose authority reigns in the heart, and on the influence all these produce on public opinion before that opinion governs rulers.”1

Even someone as secular as Benjamin Franklin acknowledged the point in his call for prayer at the Constitutional Convention:

“I have lived . . . a long time and the longer I live, the more convincing proofs I see of this truth — that God governs in the affairs of men. And if a sparrow cannot fall to the ground without his notice, is it probable that an empire can rise without his aid? We have been assured . . . in the sacred writings that ‘except the Lord build they labor in vain that build it.’ I firmly believe this; and I also believe that without his concurring aid we shall succeed in this political building no better than the Builders of Babel: We shall be divided by our little partial local interests; our projects will be confounded, and we ourselves shall be become a reproach and a bye word down to future age. And what is worse, mankind may hereafter this unfortunate instance, despair of establishing Governments by Human Wisdom, and leave it to chance, war, and conquest.”

Following William Blackstone, Alexander Hamilton (1757–1804), signer of the Constitution, argued: “The law of nature, ‘which, being coeval with mankind and dictated by God Himself, is, of course, superior in obligation to any other. It is binding over all the globe, in all countries, and at all times. No human laws are of any validity, if contrary to this; and such of them as are valid, derive all their authority, mediately, or immediately, from this original.”2

Rufus King (1755–1827), another signer of the Constitution and a vice-presidential candidate, wrote something similar: “[The] law established by the Creator, which has existed from the beginning, extends over the whole globe, is everywhere and at all times binding upon mankind. . . . [This] is the law of God by which He makes His way known to man and is paramount to all human control.”3 King understood that God’s law “is the foundation of all constitutional & civil laws.”4 In 1819, during the debates that would eventually lead to the Missouri Compromise, King appealed to God’s law in his opposition to slavery:

“I have yet to learn that one man can make a slave of another. If one man cannot do so, no number of individuals can have any better right to do it. And I hold that all laws and compacts imposing any such condition upon any human being are absolutely void, because contrary to the law of nature, which is the law of God, by which he makes his ways known to man, and is paramount to all human control.”5

It’s obvious that Hamilton and King saw no conflict in supporting the Constitution and acknowledging the universal (global) validity of God’s law.

Historian David Brion Davis makes the claim in reference to King’s comments before the Senate gallery in 1819 that “up to that time no statesman or political leader in the world had publicly made such a radical declaration of slavery’s illegality.”6 If the Constitution was the moral law of the land, then King did not have an argument since the Constitution did not prohibit slavery. But if the Constitution rested on an external moral standard, then his point was well made. John Quincy Adams, writing 50 years after the ratification of the Constitution, argued the following point: “[T]he laws of nature . . . of course presupposes the existence of a God, the moral ruler of the universe, and a rule of right and wrong, of just and unjust, binding upon man, preceding all institutions of human society and government.”7

He goes on to state that the people “are under a moral responsibility to the Supreme Ruler of the universe.”8 Who is this “Supreme Ruler”? He is the God of the Bible.9 Adams describes the Declaration of Independence as “the ark of your covenant” and “Mount Gerizim is the Constitution of the United States.”10 He concludes The Jubilee of the Constitution with these words of warning for our generation, a generation that would attempt to separate God’s law from the Constitution:

“In that scene of tremendous and awful solemnity, narrated in the Holy Scriptures [Deut. 28], there is not a curse pronounced against the people, upon Mount Ebal, not a blessing promised them upon Mount Gerizim, which your posterity may not suffer or enjoy, from your and their adherence to, or departure from, the principles of the Declaration of Independence, practically interwoven in the Constitution of the United States. Lay up these principles, then, in your hearts, and in your souls—bind them for signs upon your hands, that they may be as frontlets between your eyes—teach them to your children, speaking of them when sitting in your houses, when walking by the way, when lying down and when rising up — write them upon the doorplates of your houses, and upon your gates — cling to them as to the issues of life — adhere to them as to the cords of your eternal salvation. So may your children’s children at the next return of this day of jubilee, after a full century of experience under your national Constitution, celebrate it again in the full enjoyment of all the blessings recognised by you in the commemoration of this day, and of all the blessings promised to the children of Israel upon Mount Gerizim, as the reward of obedience to the law of God.”

The Constitution lacks a moral base. Our Founders, based on what we read in the Declaration of Independence, probably believed that no one would give up the idea that God was the author of our laws. Darwin changed all that with the publication of On the Origin of Species in 1859. Neither God nor “the laws of nature” is possible in a world after Darwin. The Constitution will implement whatever law is deemed proper by “we the people” or “we five Supreme Court Justices.”

In the end, someone, some group, or some outside authority will be a moral authority over the Constitution. It’s inevitable; it’s an inescapable concept.