Democrats have accused conservatives as being anti-science because they don’t believe that life can arise from non-life, that there’s more to the cosmos than matter (otherwise how could there be mind, logic, love, morals?), that unborn babies are persons, that men can’t become women and women can’t become men, that homosexuality is irrational, illogical, and contrary to nature, that money can’t be created out of thin air, and men are different physically and in many other ways.

But it’s the Democrats who are the real anti-science party. Here’s the latest from newly elected Representative U.S. Rep. Ilhan Omar:

“I urge you to reconsider this discriminatory, unscientific policy and follow the example of the International Olympic Committee,” Omar wrote to USA Powerlifting last month, noting she’s asking Ellison to conduct an investigation. “The myth that trans women have a ‘direct competitive advantage’ is not supported by medical science, and it continues to stoke fear and violence against one of the most at-risk communities in the world.” 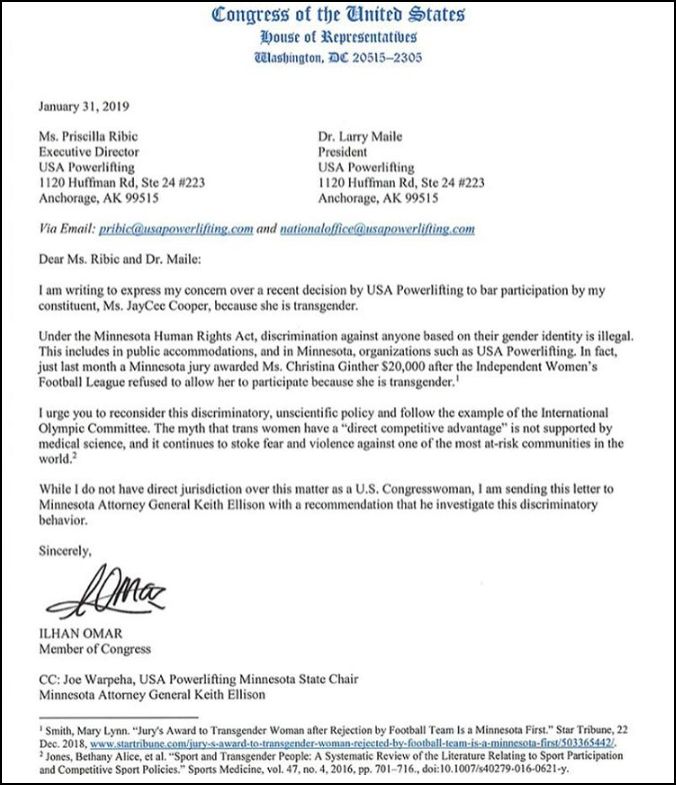 This is especially true in Power and Olympic Weight lifting competition.

Men and women compete separately because men and women are not equal physically. This is also true in track and field and every other major sport.

Let’s put Rep. Ilhan Omar’s claim that women who pretend to be women don’t “have a ‘direct competitive advantage'” over biological women.

Let’s consider track and field and the shot put since the event requires a great deal of strength. Weight training is mandatory.

Here are the records for the high school shot put event:

This looks close until you realize that the women throw an 8.8-pound shot while the men throw a 16-pound shot, nearly twice the weight.

I don’t know what “medical science” Rep. Omar has been reading, but the tape measure and the scale are the best scientific instruments in measuring athletic achievement.

Can a Person Who 'Hates Abortion' (Killing Unborn Babies) be a Democrat?

If the 'New Green Deal' Becomes Law, People Will Freeze to Death and Cars Won't Start