Can You Pass This 10-Question Arizona High School Citizenship Test?

To determine students’ level of basic civic knowledge, The Goldwater Institute surveyed Arizona high school students with questions drawn from the United States Citizenship and Immigration Services (USCIS) item bank, which consists of 100 questions given to candidates for United States citizenship. You can take a practice test here.

It’s even worse when it comes to tax questions. Adults get an ‘F’ on a ten-question income tax quiz.

The longstanding practice has been for candidates to take a test on 10 of the 100 items. Those applying for citizenship would have to study all 100 questions since they did not know what 10 questions would be asked. A minimum of six correct answers — a failing percentage — is required to pass. The service recently reported a first-try passing rate of 92.4 percent.

None of this is surprising. A study conducted by the new McCormick Tribune Freedom Museum “found that 22 percent of Americans could name all five Simpson family members, compared with just one in 1,000 people who could name all five First Amendment freedoms. . . . The survey found more people could name the three ‘American Idol’ judges than identify three First Amendment rights. They were also more likely to remember popular advertising slogans.” 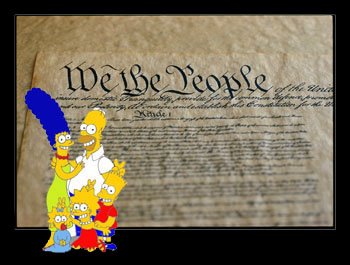 This misidentified right was shocking. But maybe not, considering how many dogs get elected to Congress:

Here are the 10 questions from the pool of 100. Although you won’t (hopefully) need the answers, I’ve supplied them below just in case:

The Myth of the Uneducated Country Conservative

Can You Pass This 10-Question Arizona High School Citizenship Test?