In addition to Sharia law and killing for Allah for a first-class ticket to the Islamic version of heaven with 72 virgins based on a reading in the hadith, there’s an end-of-the-world aspect to Islam.

Here’s how Joel Rosenberg, author of a number prophecy books, has been addressing the topic of an “apocalyptic Islam.” The following is from an interview he did with the Christian Post:

“We are not simply facing a threat from radical Islam. At the core, we are actually facing something even worse. We face the threat of apocalyptic Islam. For the first time in human history, we now are faced with two nation-states whose leaders are driven by an end-of-the-world [theology].

“The Islamic Republic of Iran [is] led by men that believe that the end of the world is at hand and they have a Shiite Islamic theology. That is why they are trying to build a nuclear weapons program.  Why? Because they believe the way to bring the coming of the Islamic Messiah, the Mahdi or the 12th Imam, is to annihilate Israel and the United States. That is Shiite apocalyptic Islam. It is not just radical; it’s apocalyptic.”

I find all of this very interesting since Joel Rosenberg is a believer in a Christian version of apocalypticism. He’s written many books on the subject, and all of them are written from the perspective that the end-times are right around the corner.

Rosenberg’s apocalypticism is different from that of Islam in that he is not advocating for Christians to take an active part in bringing in the end times. For example, in his book Epicenter he argues for a near prophetic event based on chapters 38 and 39 in the book of Ezekiel. These two chapters have been used for a long time by prophecy writers. As world events change, the players and circumstances change.

In 1970, Hal Lindsey argued that Russia was the end-time bad guy. When the political sands shifted, Islam became the end-time provocateur. “In early Christian terms, Gog and Magog were often identified with the Romans and their emperor. Eusebius [of Caesarea] seems to have been the first church father to suggest this identification. In his view, Gog . . . stands for the Roman Imperium.”1 When Rome passed from the world stage, the Gog and Magog candidates of Ezekiel 38-39 were given new prophetic identities (see chart). 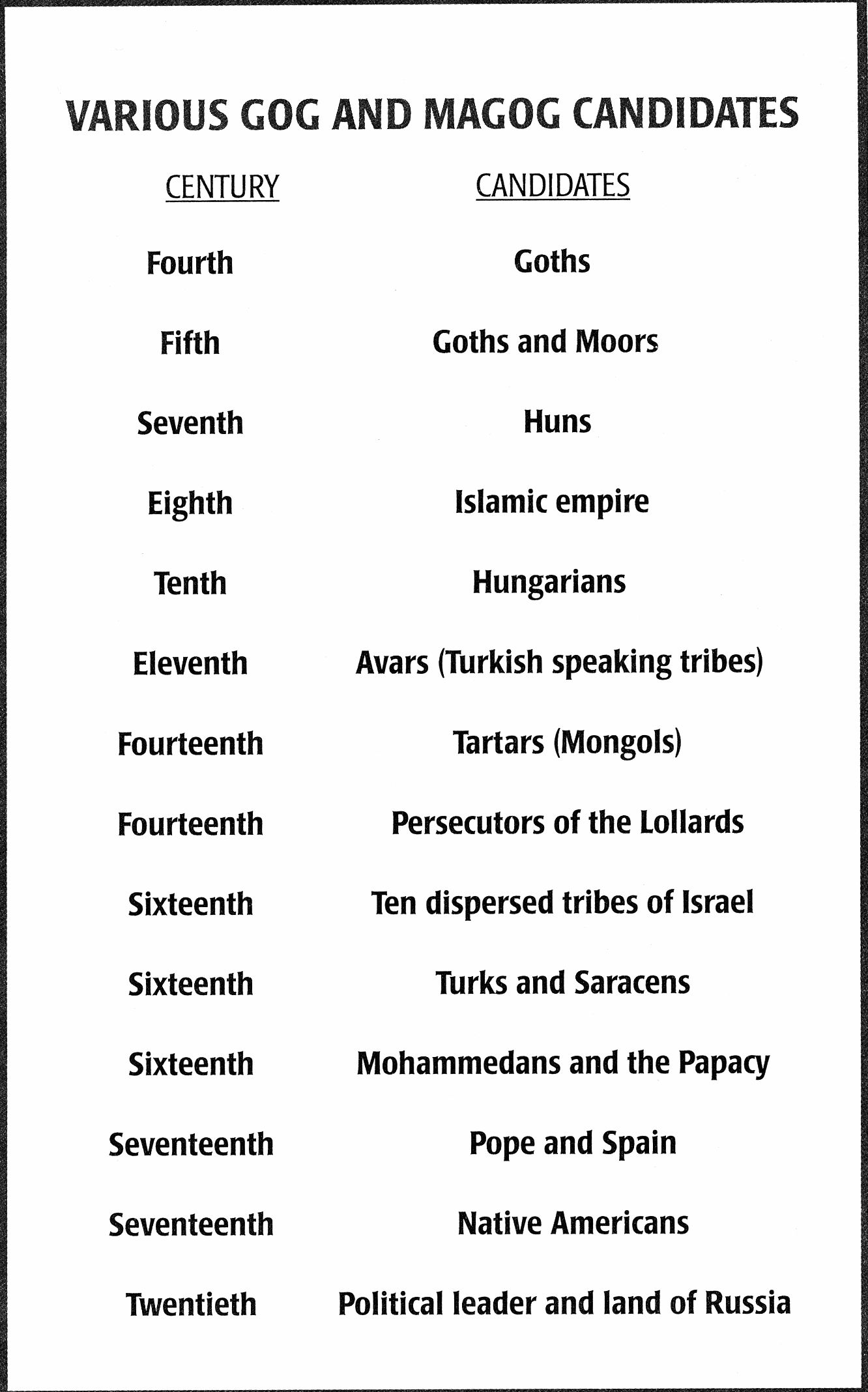 Lindsey predicted that it would all come to an end 40 years after Israel became a nation again in 1948. As the 40-year generation timing was about to run out, Lindsey wrote that he did not know “how long a Biblical generation is. Perhaps somewhere between sixty and eighty years. The state of Israel was established in 1948. There are a lot of world leaders who are pointing to the 1980s as being the time of some very momentous events. Perhaps it will be then. But I feel certain that it will take place before the year 2000.”2

While Joel Rosenberg, Hal Lindsey, and many other modern-day prophecy writers may hold a different view of the apocalypse from that of the radical Islamists, their views immobilize millions of Christians who believe it’s all coming to an inevitable crash and there is nothing they or anybody else can do about it.

A number of political people are listening to Rosenberg, so much so that he has been dubbed a “modern-day Nostradamus,” not a very complimentary thing to say about a Christian. But with so much history of prophetic speculation in the past, the moniker fits. People have short memories. They forget or have never known that prophetic speculation in the light of world events has a long and failed track record. 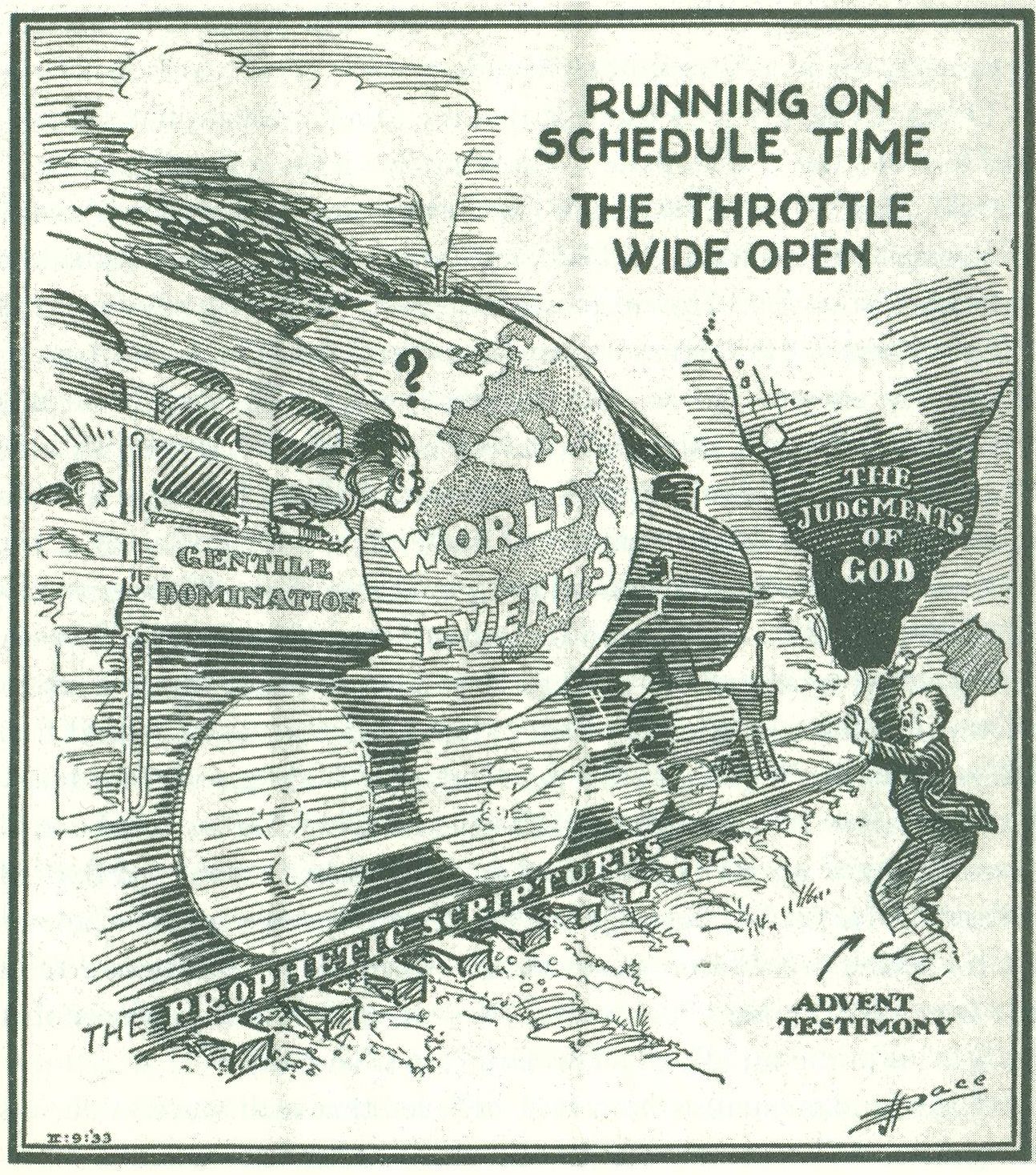 The fear among people like me is that Rosenberg, like John Hagee, will give enough people in Congress a false prophetic narrative that will lead them to engage in a Middle East war. At the same time, millions of conservative Christians will see getting involved politically as unproductive because, as Rosenberg and others argue, they’ll be “raptured” to heaven before all hell breaks loose.