New York has passed the most egregious holocaust laws in history. It seems that Illinois is about to follow. The new abortion rights law is written so loosely that a woman, for any reason, could demand an abortion. That is, demand that her unborn baby be killed anytime throughout the nine months of pregnancy.

To be clear, this is not the passage of abortion rights, but the permission to commit infanticide and call it by another name — an eight-pound baby can survive outside the womb with very little medical aid. Late-term abortion procedures are ghoulish and graphic: The Lozier Institute reports that “Abortions performed after 20 weeks gestation, when not done by induction of labor (which leads to fetal death due to prematurity), are most commonly performed by dilation and evacuation (D & E) procedures. These particularly gruesome surgical techniques involve crushing, dismemberment and removal of a fetal body from a woman’s uterus, mere weeks before, or even after, the fetus reaches a developmental age of potential viability outside the mother.” (Washington Examiner)

Here’s the irony. One of the replacement towers for the Twin Towers was lit up in pink in celebration of the baby holocaust. Did you know that there is a Ground Zero memorial that honors unborn babies who were killed along with their mothers in the terrorist attack? Will “HER UNBORN BABY” be sandblasted from the monument to keep it consistent with NY’s new abortion law since the law “removes abortion from the definition of homicide and New York’s criminal code altogether”? “Previously, New York law treated the murder of an unborn child in its the third trimester as a felony offense punishable by up to seven years in prison.”

There were nearly 3,000 people killed on 9/11 in NY. Take a look at this chart. Abortion is a big money maker for New York:

The following is from a September 11, 2018, Daily Beast article:

However much the nation has fractured since those days of unity immediately following 9/11, the dead remain dead and the obligation they leave us remains unchanged.

The challenge to give their loss meaning is renewed at each anniversary observance, when their names are read aloud, ten of them joined by a phrase that once again hung in the air at Ground Zero on Tuesday morning.

“VANESSA LANG AND HER UNBORN CHILD.”

‘RENEE A. MAY AND HER UNBORN CHILD.”

“RAHMA SALIE AND HER UNBORN CHILD.”

“DIANNE SINGER AND HER UNBORN CHILD.”

These children-never-to-be would have now been 16, the amount of life they missed having grown with each year.  The first of those years, we were able to tell ourselves that at least the evil we faced had brought out the good in us, beginning with the cops and firefighters who raced into the burning towers.

The above comments are staggering: “these children-never-to-be … the amount of life they missed.” What? 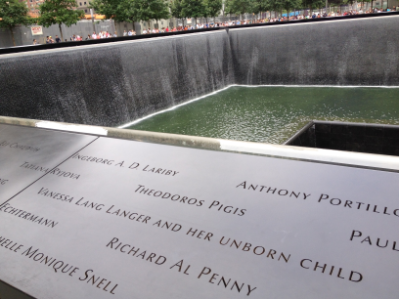 Gov. Cuomo and his smiling abortion lovers would most likely argue, “These women chose to keep their children. To them, they were ‘unborn children.’ It’s the choice that matters. There are women who do not consider their ‘fetus’ to be a child, and even if they do, it’s their choice.”

It’s a woman’s choice that makes or breaks an unborn child’s life. The idea of “choice” is everything. A man chooses to be a woman (or whatever), and “voila!” he is now a woman.

Abortion is a form of Moloch worship. Yes, abortion is a religion; a ritual of child sacrifice celebrated by men and women alike:

More than 2 million Jews live in New York. Don’t they see that a holocaust is taking place right before their eyes? “Never Again” has been an ongoing mantra of modern-day Jews with the memories and images of the Holocaust still fresh in their mind. It is happening again.

In the United States, Conservative Judaism, Reconstructionist Judaism, and Reform Judaism are usually aligned with the interfaith Religious Coalition for Reproductive Choice. Orthodox organizations such as the Orthodox Union and Agudas Yisrael have occasionally partnered with pro-choice organizations when necessary to ensure that abortions will be available to women whose lives are endangered by the fetus.

Polls of Jews in America report that 88% of American Jews are pro-choice.

Then there’s the Catholic Church.

New York Gov. Andrew Cuomo says he’s a practicing Catholic. He attends church with his live-in girlfriend, supports abortion on demand, and pushed for the legalization of homosexual marriage. Where is the priest of his parish? Where is the Bishop of his diocese?

How did we get here? First, Christians have opted out of culture and politics. They say it’s not the realm of the “spiritual.” They forget that all of life is spiritual.

When God finished creating the world, He said it was “very good” (Gen. 1:31). Even after the fall, the Bible says, “For everything created by God is good, and nothing is to be rejected if it is received with gratitude; for it is sanctified by means of the word of God and prayer” (1 Tim. 4:4-5).

Second, conservatives have abandoned “social issues” for the almighty dollar, acceptance, and prestige. John Hayward says it better than I ever could:

The academic heavyweights of passive conservatism are beginning to think religion is effectively dead as a cultural force, the people who cling to it scare away those much-sought-after “moderates,” and causes like pro-life are a futile waste of their energy.

Above all, they are animated by the dream of a “socially liberal but fiscally conservative” moderate majority quietly turning to them and delivering electoral victory. They tell themselves such a silent majority lurks in every demographic, awaiting the right activation signals.

The fatal problem with this strategy is that the Left plays by no such passive rules. It actively reshapes the electorate with government power and cultural influence. It’s not worried about freaking out the moderates — it subdues and conquers them by redefining what is “normal.”

The Left attacks relentlessly because it pays no price for failed assaults… because it has no active conservative enemy to make it pay. There’s nobody else on the field. Passive conservatives merely quibble about how many yards the Left should get on every play.

You can’t negotiate with the devil or think he sleeps.