Communication is essential in any relationship — a husband and wife, parents and children, employer and employees, and speaking to the issues of the day.

I’ve done a lot of radio interviews over the years. There is one thing I’ve learned: keep it short, keep it sweet, and keep it memorable. Long protracted responses to questions are lost on people who are not fundamentally aware of the issues.

Rarely do debates win over those involved in a one-on-one debate. They arrive with an opinion, and they leave with the same opinion. A debater should work to make his points to those sitting in the audience keeping in mind the “10-10-80” rule.1 Generally speaking, each side has well-informed specialists of about 10 percent with the remaining 80 percent as a spread of opinion between the two opposing sides. It’s this 80 percent that is looking to be moved by sound argument. But if this middle group can’t understand what the debaters are debating, no movement to one side or the other will take place.

Rhetoric is a lost art. Few know how to do it well.

Rhetoric is about making a compelling point to move people to action. As a Christian, telling the truth is fundamental to rhetoric. It doesn’t matter to Leftists if what they say is true or not. The goal is to motivate people to action by any means possible.

In one sense, this puts truthtellers at a disadvantage. In many cases, no matter how well you present your case — truth and all — those with an agenda will disregard you and your case.

The Left has been good at rhetoric:

Similarly, words used in reporting expose preferences for one worldview over another. “Right‑wing conservatives” versus “progressives” is just one example. Those who are anti-homosexual are described as “homophobic,” “intolerant,” “hateful,” and “unloving.” Those who are opposed to abortion are “anti-choice” never “pro-life.” Frank Schaeffer described the bias this way:

Think of the use of labels to categorize political activity. Some labels are used to neutralize the actions of certain groups; others denote being “one of us,” acceptable.

The words “right wing,” “fundamentalist,” “pro-life,” “absolutist,” and “deeply religious,” are put-downs more than categories. Conversely, think of the unspoken pat on the back and blessing that the following words convey: “moderate,” “pluralistic,” “liberal,” “civil libertarian,” “pragmatic,” and “enlightened.”2 Liberals and Leftists almost always beat Conservatives and Republicans when it comes to rhetoric. The most famous rhetorical master was Martin Luther King, Jr. I suspect that most people don’t know much about his 1963 March on Washington. They don’t know much about what he said or what the march was really about.

The event was sponsored by the March on Washington for Jobs and Freedom. 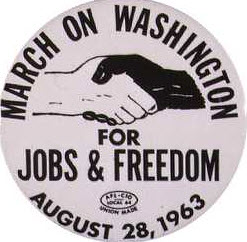 It was organized by a pair of socialists, A. Philip Randolph and Bayard Rustin. Randolph had run as a political candidate for the Socialist party in New York in the 1920s. Rustin had been a communist, but later softened somewhat, and wound up a socialist. Its major goal was to get the federal government to create jobs and to increase the minimum wage.

Liberals still wrap things “in the swaddling clothes of biblical imagery” but don’t mean any of it. It’s their biblical rhetoric and calls for lofty sounding policies that get Blacks to vote for Democrats against their best interests.

King’s dream became a power play among those who picked up his fallen mantle.

There are millions of uneducated, ill-informed, and propagandized people going to the polls each election and voting in terms of rhetorical clichés. Rarely can they reason beyond what they “feel” and what impacts them personally.