Leftists will do anything they can to destroy people who don’t agree with them. We see it every day with Donald Trump and his supporters. The BuzzFeed fake news report is the latest in a long line of attacks. The media immediately accepted it as the truth and began their impeachment chant and planned their Trump exodus parties.

The false claim was so egregious that the Mueller investigative team had to issue a statement stating that the story was bogus, like so many other “gotcha” stories.

There is no negotiating with Leftists. Leftists are on a seek and destroy mission. Rush Limbaugh said the following:

Despite all of the evidence over … how many years that have led into decades, we still, apparently, have people that continue to hold out hope that they’re reasonable, that they’re honest, that they can be approached as reasonable people, when they can’t be.

We are at war but we’re acting like it’s a mild skirmish that will eventually go away. Where were Christians and conservatives in the midterms? We keep hearing there’s not a dime’s worth of difference between the two parties. There is. It’s not only the Democrats and RINOs. It includes colleges and universities, the media, entertainment, Social Media, public (government) schools, etc. It’s long past time that we get involved in the war to win.

Too many Christians are not engaged because of these frequently recited half-truths  that have neutralized Christians for decades: Jesus didn’t get involved in politics so Christians shouldn’t, there’s a separation between church and state, politics is dirty, our citizenship is in heaven, religion and politics don’t mix, we’re not permitted to judge, Satan is the god of this world, Jesus is coming back soon. See my comments about these spiritual” clichés that have done serious damage to the church and the nation:

Wake up. Stop treating a masochistic desire for you and your children to be persecuted by the State as a mark of spirituality. Stop sleeping a Gethsemane sleep and passing it off as a Jesus-in-the-boat sleep. We know you have the “innocent as doves” shtick down; now work on the “wise as serpents” part. (Robert A. J. Gagnon)

The story of a group of Catholic high school students who allegedly harassed a Native American beating a drum is all part of the strategy. The singled-out student is white, male, Catholic, anti-abortion, and wearing a MAGA hat. He was the poster boy for everything the Left hates.

Within minutes of a story about the incident, the media, the usual Hollywood suspects (e.g., Debra Messing, Chris Evans, Alyssa Milano, Kathy Griffin), and even some allegedly conservative news sources (e.g., National Review) condemned this kid to the innermost circle of hell. The Roman Catholic Diocese of Covington and Covington Catholic High School where the student attends started “virtue signaling” before all the facts were in threatening to expel the students.

Kathy “Bloody Head of Trump” Griffin wanted the names of all the students involved so they could be harassed.

Then there was this from Jack Morrissey, Disney Producer of Beauty and the Beast: 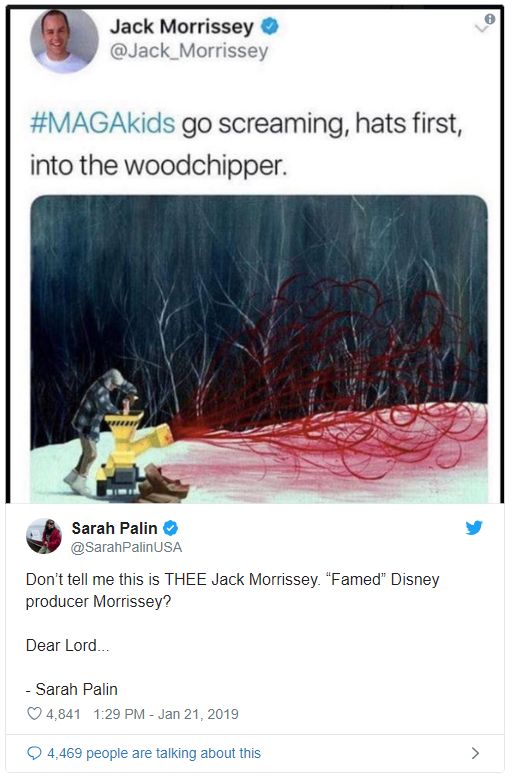 He later apologized. That’s all Leftists have to do when they do or say something horrendous.

Some wanted to punch the kid in his face because they didn’t like the expression on his face. Welcome to 1984:

“The smallest thing could give you away. A nervous tic, an unconscious look of anxiety, a habit of muttering to yourself – anything that carried with it the suggestion of abnormality, of having something to hide. In any case, to wear an improper expression on your face (to look incredulous when a victory was announced, for example) was itself a punishable offence. There was even a word for it in Newspeak: facecrime, it was called.”

Even after the original story was refuted, the Left continues to rage. Who were the real culprits? It was a group of blacks (Black Hebrew Israelites) harassing some white high school students. “The BHI members shouted profanities at the boys, calling them names such as ‘cracker,’ ‘faggot,’ and ‘pedophile,’ and singled out a black student for abuse, saying he was a ‘n*gger’ who was going to be murdered and have his organs harvested by the white kids.” (PJ Media)

This account doesn’t fit the Leftist narrative. What does the Left do with blacks who hate homosexuals, use the N-word against a young black man, and harass a Native American?

A lawsuit has been “threatened.” As one poster wrote, “Don’t ‘threaten lawsuits.’ DO IT.” I hope the students’ lawyers are taking screenshots of every Twitter and Facebook post and capturing every article written defaming them and newscast broadcast indicting them.

One more thing. In addition to another attack on Trump, the attack on some minor high school students, there is the attack on Vice-President and his wife because she is teaching at a school that teaches that homosexuality, fornication, and adultery are sins.

You are the worst representation of what it means to be a Christian. I am a Christian woman, and what I do know about Christianity is that we bear no prejudice and everybody is welcome.

While it’s possible that Stefani Joanne Angelina Germanotta (her real name) is a Christian, it’s not likely. Being born into a Roman Catholic family, going to church, and attending an all-girls Roman Catholic school doesn’t make someone a Christian.

Gaga’s sexual lifestyle does not support her “I am a Christian woman” claim:

As a bisexual woman,1 Gaga actively supports LGBT rights worldwide. She attributes much of her early success as a mainstream artist to her gay fans and is considered a gay icon. Early in her career she had difficulty getting radio airplay, and stated, “The turning point for me was the gay community.” She thanked FlyLife, a Manhattan-based LGBT marketing company with whom her label Interscope works, in the liner notes of The Fame. One of her first televised performances was in May 2008 at the NewNowNext Awards, an awards show aired by the LGBT television network Logo…. Gaga was ordained as a minister by the Universal Life Church Monastery so that she could officiate the wedding of two female friends. (Wikipedia)

The attacks are coming from everywhere. Speak and act before you won’t be able to say a word.

The following are some of the reasons many Christians use to justify not getting involved culturally and politically:

There’s so much more that could be said on this topic. See my book Myths, Lies, and Half-Truths: How Misreading the Bible Neutralizes Christians and Empowers Liberals, Secularists, and Atheists.

Rep. Alexandria Ocasio-Cortez is the Latest in a Long Line of Chicken Littles