“What Makes You Think We Read the Bills? was the tongue-in-cheek title of a book written about 30 years ago by long-time California lawmaker H. L. ‘Bill’ Richardson. The book is a chronicle of slip-ups, snafus and shenanigans from our national and state capitols. The stories are amusing but also outrageous. They amply illustrate the shortcomings and imperfections of the legislative process even in the world’s most mature representative democracy.”

Little has changed since Richardson’s book was published. Actually, it’s even worse since the bills that our elected officials vote on are longer and entangle us even more into the growth factor of American politics.

While steroids and growth hormones have been banned in most sports, there is no such ban in the once hallowed halls of Congress. everything is bigger and does more damage to the body politic. 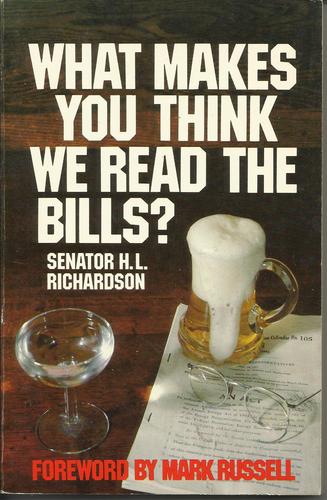 Not only don’t our elected officials read the bills, they don’t even write them. No one really knows who wrote the regulations in the massive Affordable Care Act. Nancy Pelosi made it clear that the only way anybody would know what was in it was to vote for it before knowing what was is it. This is perfect government logic.

The latest government boondoggle, masquerading as a National Defense Authorization Bill, was made available to the chairmen and ranking members of the House and Senate armed services committees Tuesday evening. I’m sure your congressman read every word of it.

CNS News reports that those in leadership positions have not read every page of the bill and don’t intend to. Standard operating procedure is to add massive layers of pork to unrelated bills as payoffs to fellow congressmen. “You vote for my pork, and I’ll vote for your pork. That way we can go back to our states and districts and tell everybody how much bacon we were able to bring home.

“Democratic Whip Steny Hoyer (D-Md.) admitted on Thursday morning that he had not read the 1,648 page National Defense Authorization Bill that the House plans to vote on this afternoon.

“CNSNews.com asked Hoyer: ‘Have you read all 1,648 pages of the final text of the National Defense Authorization Bill?’

Boehner was asked the same question. Like Hoyer, he is counting on what he’s been told is in the bill and will vote for it. Remember, it’s a Defense appropriation bill. Low Information voters would assume that the whole bill is about national Defense. It’s not:

“The bill, which is supposed to authorize the activities of the Department of Defense and defense-related activities in the Department of Energy, also includes provisions creating a number of new national parks and a federal commission to come up with a plan for a National Museum of Women’s History.”

The Washington Post is reporting that “Tucked inside the bill’s more than 1,600 pages is language creating six national parks.”

If Gay Sex is OK Why Keep the Ban on Gay Blood Donations?

Carson Kight will Take Your Mind off the World's Troubles