The Black Panther film, based on the Marvel comic character and book (first appearance in Fantastic Four 52 in 1966) of the same name, has become a rallying point for black actors, writers, producers, and directors.

It’s received a 97% on Rotten Tomatoes. One site carried the following headline:

The author qualified that claim in the article, but the reviews of the film have been off the chart.

Some reviews have noted its political themes. Since I haven’t seen the film I’ll take their word for it. Voter registration tables have been set up outside some theaters to register black voters. Every film is political. It’s not a good or bad thing; it just is.

But Black Panther is different:

Once it became clear Marvel’s Black Panther would be a huge draw to movie theaters, a trio of black women had an idea: If black communities would turn out in large numbers to see the film, why not seize the opportunity to get people registered to vote?

The result was the #WakandaTheVote campaign, an initiative that allows people to set up voter registration events at local theaters or register to vote via text message. The initiative is headed by Kayla Reed, Jessica Byrd, and Rukia Lumumba, who also created the Movement for Black Lives’ Electoral Justice Project. The EJP aims to “continue a long legacy of social movements fighting for the advancement of the rights of Black folks through electoral strategy.” (Vox) 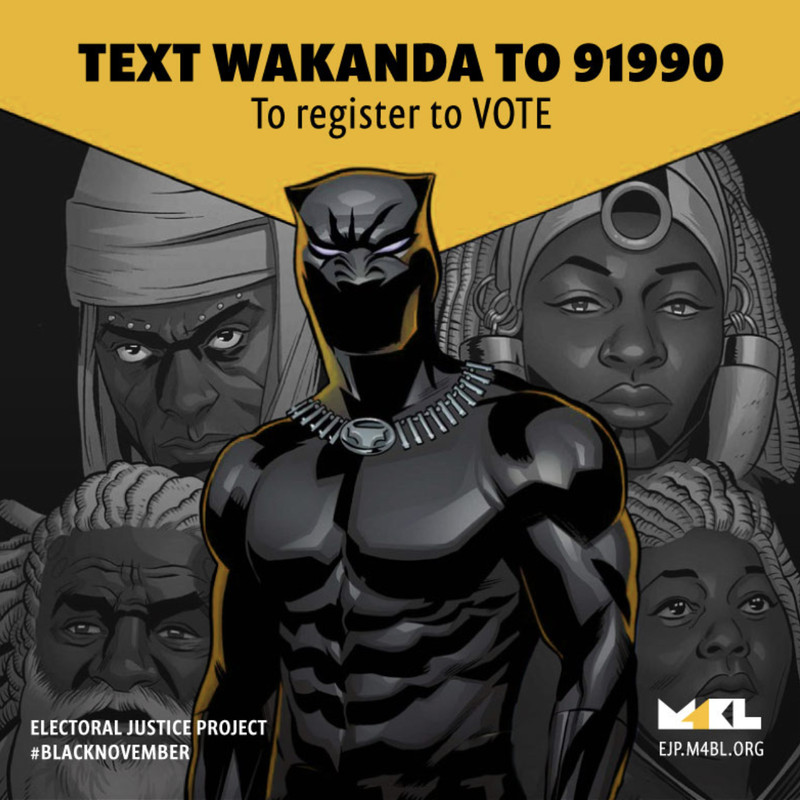 I wonder what would have been said if a similar initiative had been attempted at the showing of Captain America.

Once these new black voters are registered, what political party will they embrace? It’s my guess it’s going to be the Democrat Party. What else, although “Civil rights pioneer and unabashed conservative Clarence Henderson had a central message for those gathered to hear him speak in Fayetteville, North Carolina, last week: Black voters should join the Republican Party.” (The Blaze)

While blacks are excited and proud of Black Panther, as they should be, will it make a difference in black communities with education, black-on-black crime, and fatherless homes?

Not only has the Democrat party been the party of black economic slavery through the continued support and growth of the welfare state, but it is the party of more black deaths than lynching through its abashed support of abortion and Planned Parenthood (Republicans are only less guilty):

There was a time when Jesse Jackson describe abortion as “black genocide,” until he ran for President.

Minority women constitute only about 13% of the female population (age 15-44) in the United States, but they underwent approximately 36% of the abortions. According to the Alan Guttmacher Institute, black women are more than 5 times as likely as white women to have an abortion. On average, 1,876 black babies are aborted every day in the United States.

Given what I’ve read about Black Panther and the fictional world that was created, the character would be horrified that his fellow-black brothers and sisters would kill off their heritage and future by abortion and give their political support to the one party that has embraced abortion as a political sacrament.

“In NYC, home of Planned Parenthood, more black babies are aborted than born alive! Abortion, no matter the race, is a tragedy. But in the black community, it is epidemic. Mainstream media, black celebrities, health care professionals and so-called black leaders continue to shill for Planned Parenthood, while our churches (who stood against injustice during the Civil Rights Movement) are mostly silent. Regardless, the truth screams loud and clear. Under the false liberty of ‘reproductive freedom,’ we are killing our very future.” (TooManyAborted)

And I will add, the pressure of the LBGTQ community to pressure black filmmakers to include same-sex and transgender characters in their films as if being black is the same as same-sex sexuality and people claiming they are one of maybe 60 different genders.

A person’s race is not a sexual behavior. There is no way to transition to being a different race.