Finally there’s something on which I can agree with the liberal student crybabies. Some students at Princeton University don’t like Woodrow Wilson – a Democrat – who served as president of Princeton from 1902 to 1910 and as the 28th President of the United States. They want his name expunged from the University. Now if we can only get them to agree to expunge some of Wilson’s political policies as well, especially the the 16th Amendment — the income tax amendment. But then the students wouldn’t be able to get “free education.”

Student outrage only goes so far.

There’s a lot not to like about Wilson, but his racial views are some of the worst. It’s too bad that the anti-Wilson students don’t realize that it wasn’t only Wilson’s racial views that have damaged our nation.

Many don’t know that Woodrow Wilson, as President, supported the 1915 film The Birth of a Nation.

A controversial and epic-making silent American film produced and directed by D. W. Griffith was three hours of myth presented as history. The film originally premiered under the title The Clansman in January 1915 in California. Three months later it was released as The Birth of a Nation when it premiered in New York. The name change was designed to give the film broader appeal.

The film was based on Thomas Dixon’s 1905 play The Clansman, the second volume in a trilogy of books dealing with racial issues. The NAACP, founded just six years earlier in 1909, described it as “3 miles of filth.”1

On the other hand, President Woodrow Wilson, who had been a classmate of Dixon’s at Johns Hopkins University, was reported to have said that it was “like writing history in lightning . . . and yet it is all so terribly true.” While the attribution of the quotation to Wilson is disputed, his History of the American People, which praised the Ku Klux Klan of the post-Civil War era, is quoted extensively throughout the film. Birth of a Nation was the first film shown in the White House. Its distorted history became America’s history: 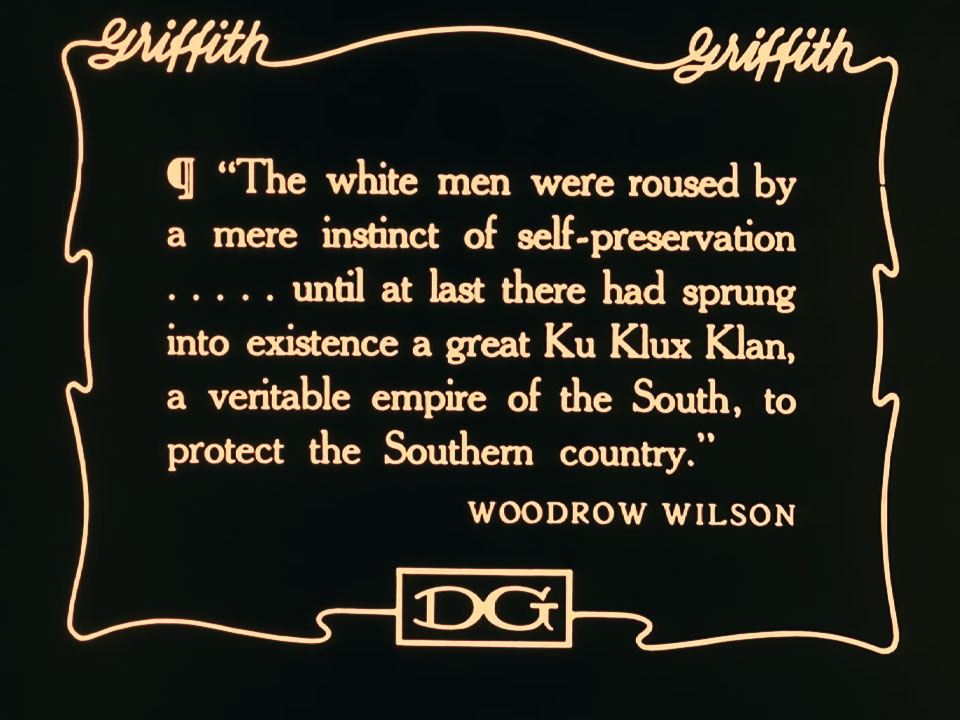 “Griffith’s message was regarded so seriously at the time that schoolchildren were taken to his movie to learn history. . . . Griffith’s main concern, however, was rewriting the history of the South and the Civil War, and he was well aware of the power of his medium. He saw his film as an educational tool, and he set out to use it as such, an intention that was itself political. The Birth of a Nation was the first important American political film, not only because it reshaped the image of the South but also because it influenced the way Americans thought about politics.”2

More than 200 million people saw The Birth of a Nation between 1915 and 1945. Some attribute the revival of the Ku Klux Klan to racial attitudes and fears that were shaped by the film. A study done by L.L. Thurstone and Ruth C. Peterson “sought to measure changes in the attitudes of groups of children toward certain social values after those children had a viewed a selected motion picture.”3

Of particular interest is how the attitudes of children changed regarding “Negroes” after watching The Birth of a Nation. Henry James Forman describes the study in Our Movie-Made Children, first published in 1933:

“The investigators found in Illinois a town with a population of 5700 people which had no Negroes. According to the superintendent of schools, very few children in Crystal Lake, the town fixed upon, had ever known or seen Negroes. Upon the subject of prejudice, therefore, for or against the Negro, here obviously were some slates4 from which much could be learned. . . .

“A test administered to a group of 434 Crystal Lake children, from grades six to twelve, that is, including seniors of the high school, showed a pronounced liberality toward the Negro race. Only a very small proportion of the group betrayed prejudice by agreeing with such statements in the test as ‘The white race must be kept pure at all costs, even if the Negroes have to be killed off.’ Or, ‘The Negro should be considered in the lowest class among human beings.’ On the contrary, they gave large endorsement to propositions such as this: ‘I believe that the Negro deserves the same social privileges as the white man;’ or, ‘by nature the Negro and white man are equal.’

“Such were the slates. The next step was to write upon them. Not so long ago ‘The Birth of a Nation,’ a picture considered as a powerful example of anti-Negro propaganda, was revived with sound. The test on general attitude toward Negroes having been administered to the children, it was decided to show them that film, the ‘Birth of a Nation,’ which is anti-Negro. Here was a way of writing upon virgin and unmarked slates with the assurance of being able to read scientifically what was written thereon.

“The day after the showing of the picture the children were once again tested on their attitude toward the Negro race. One wishes the reader could see the curve of graphs plotted by the psychologists on the before and after readings. If you compare the ‘before’ readings to a peak, then the ‘after’ readings sink almost to a crater.

“Where before the picture had been seen the favorable attitude curve rose to a height of, say, nearly 200 units, it dropped after ‘The Birth of a Nation’ had been seen to well under 100, the unfavorable attitude rising correspondingly. The unmarked slates, in other words, now bear definite record of a shift toward anti-Negro prejudice. After five months, when the test was again administered without a further showing of the picture, simply upon the recollection of the past, the effect of prejudice against the Negro still remained.”5

It wasn’t only Wilson’s racial views that were bad. The idea of an “evolving Constitution” originated with Wilson. According to the Democrat President, “government . . .  is accountable to Darwin, not to Newton.”6

I wonder how far the anti-Wilson students at Princeton are willing to go?

What About Whoopi Goldberg's Claim that Adolf Hitler Was a Christian?