It Took 35 Years to Figure This Out?

The results of a 35-year study about health are in. If you want to remain healthy, you need to “follow five simple rules – eat well, work out, drink less, keep [your] weight down and never smoke.”

It took 35 years to figure this out? We’ve always known that lifestyle, diet, exercise and not smoking enhance health. I wonder how much money was spent on this study over a 35-year period. Who cares since it’s always fun to spend other people’s money.

For nearly a century “physical culture” was a big part of our nation’s health history. Magazines, exercise equipment, and supplements have been sold by the millions. I knew this stuff when I was 12 years old, and I can assure you that’s more than 35 years ago.

Eugene Sandow’s Magazine of Physical Culture was established in 1898 and carried articles that covered the “five simple rules” that took moderns 35 years to figure out. Here’s an article about the abuse of alcohol.

Jack LaLanne, Charles Atlas, Joe Weider, Bob Hoffman, and many others, even Jane Fonda, were preaching the benefits of exercise, diet, and moderation for decades, and it didn’t cost taxpayers a penny.

The ‘Jumping Jack’ was named after LaLanne. He was 96 when he died, and he could do stuff like this:

To commemorate the ‘Spirit of ’76,’ United States Bicentennial, he swam one mile (1.6 km) in Long Beach Harbor. He was handcuffed and shackled, and he towed 13 boats (representing the 13 original colonies) containing 76 people.

Let’s consider cigarettes. Cigarettes weren’t called “coffin nails” for more than a century because they were a good substitute for tacks.

Take a look at the this 1917 postcard about smoking. But the bad health impact of smoking goes back hundreds of years. 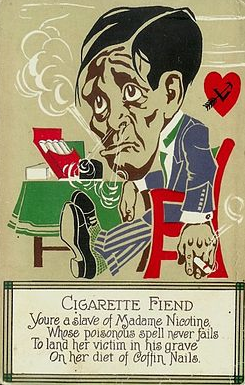 In the seventeenth century, the noxious weed was relegated to the pits of hell by King James I, the same King James (1566–1625) of the King James Bible fame. He denounced smoking as “a custom loathsome to the eye, hateful to the Nose, harmful to the brain, dangerous to the Lungs, and in the black stinking fume thereof, nearest resembling the horrible Stygian smoke of the pit that is bottomless.”

Without even reading the statistics about tobacco-related illnesses a person knows that smoking cannot be good for the body. The first time a young person inhales, his body reacts by coughing. It’s a sure sign that the body is rejecting the harmful smoke. If inhalation persists despite the body’s early warning system, nausea takes over. Then there is the label on the side of every pack that states emphatically that you will probably get cancer if you keep smoking.

I have never smoked, and I never will. Smoking is a nasty habit that contributes to diminished health, not to mention yellow teeth and bad breath. America would be better off if people did not smoke. Of course, people would also be better off if they lost some weight.

Let the market place deal with smoking. Insurers should be given the freedom to charge very high rates for smokers, even excluding certain illnesses from coverage if a person continues to smoke.

Charlie Rangel Is Right . . . Slavery is Alive and Well in the DEMOCRAT Party

It Took 35 Years to Figure This Out?