Is it Time for Doomsday or for Building a City on a Hill?

“Apocalyptic thinking is in the air,” University of Connecticut psychologist Kenneth Ring said in 1990.1 But long before 1990 and today’s claim of a near-end of all things, speculation about the apocalypse was common. In fact, dip into any generation going back nearly two millennia and you’ll find prophetic speculators galore.

It’s still in the air as we are learning from Franklin Graham, political commentator Erick Erickson of RedState.com, and the film reboot of Left Behind produced by Willie Robertson of “Duck Dynasty” fame.

What impact has prophetic speculation had on culture? If the end is always just around the corner based on certain prophetic texts linked to current events, then why bother or even hope to rebuild a failing and collapsing world?

We’ve seen it before French Revolution, World War I, World War II, and nearly every dramatic event in nearly 2000 years of history. If you want to read a chronicle of end-time speculation, take a look at Francis X. Gumerlock’s The Day and the Hour: Christianity’s Perennial Fascination with Predicting the End of the World.

The 1967 Arab-Israeli Six-Day War focused attention on the Middle East as an apocalyptic hot spot, and prophecy writers began to take advantage of the emerging crisis as sales in prophetic books demonstrate. “The single best-selling nonfiction book of the 1970s was not The Joy of Sex or even The Joy of Cooking; it was Hal Lindsey’s The Late Great Planet Earth.”2 It was declared by the New York Times to be the “no. 1 non-fiction bestseller of the decade.”3

From books like The Late Great Planet Earth and Beyond the Crystal Ball4 “Evangelicals acquired an abiding interest in ‘signs of the times,’ moments in secular politics that might portend the great religious changes foretold in the Christian scriptures, especially in the Books of Daniel and Revelation. The re-creation of the state of Israel in 1948 signified that the prophetic clock was now ticking, that the countdown to doomsday had begun.” ((Philip Jenkins, Decade of Nightmares: The End of the Sixties and the Making of the Eighties in America (New York: Oxford University Press, 2006), 84.)) Israel’s national resurgence was seen as the key that would open the end-time meaning of prophecies written long ago. All would be fulfilled in quick order within forty years of 1948.

The Late Great Planet Earth had its apocalyptic predecessors, but with a big-name evangelical publisher behind the book, its breezy novel-like writing style, and the instability of world events, American Christians were ready for an end-time scenario that would offer some hopeful sign of what the future might bring for them before 1988.
Herbert W. Armstrong’s 1975 in Prophecy!, written in 1956 and illustrated by Basil Wolverton, who also did work for MAD Magazine, is almost indistinguishable from Lindsey’s foray into prophetic sensationalism. Monte Wolverton offers this brief perspective on the apocalyptic views of Armstrong, the Worldwide Church of God, and his late father:

Armstrong thought he had discovered the heretofore lost key to all biblical prophecy, and that the Tribulation spoken of in the book of Revelation would shortly fall on the United States and the nations of the British Commonwealth. Not unlike many evangelical preachers of the early 1930’s, Armstrong adopted a dispensationalist paradigm, with a pre-millennialist, literal interpretation of the apocalyptic sections of scripture — albeit with his own particular spin. The Bible, he taught, predicted imminent worldwide calamities, followed by the return of Christ and a happy Millennium, followed by the destruction of the wicked, followed by the advent of new heavens and earth. . . . As Armstrong’s following grew, so did the threat of a second world war. He believed this was it—the Beast, the Antichrist, and the whole end-time enchilada. Armstrong, of course, was wrong — and this would not be the last time.5

Similar to Armstrong, who miscalculated the timing of the “Great Tribulation,” Lindsey was wrong about his prediction that a “rapture of the church” would occur 40 years after the 1948 founding of the modern state of Israel with a near certain claim that the end would take place by the year 2000.6 Unlike the Worldwide Church of God which abandoned its end-time speculative theology, Lindsey is as convinced as ever that the rapture is just around the corner. Even after most of his predictions did not come to pass as they were outlined in The Late Great Planet Earth, this has not stopped him from creating his own prophecy empire that includes books, articles, CDs, DVDs, and a weekly prophecy update.

There has been a large appetite for end-time books in the modern era — from Oswald J. Smith (1889–1986), who in 1926 predicted that Benito Mussolini was the biblical antichrist,7 to Edgar Whisenant who was emphatic that the rapture would take place in 1988. He was so sure that in a debate I had with him in September 1988 that if he was wrong in his calculations, then the Bible had to be wrong. 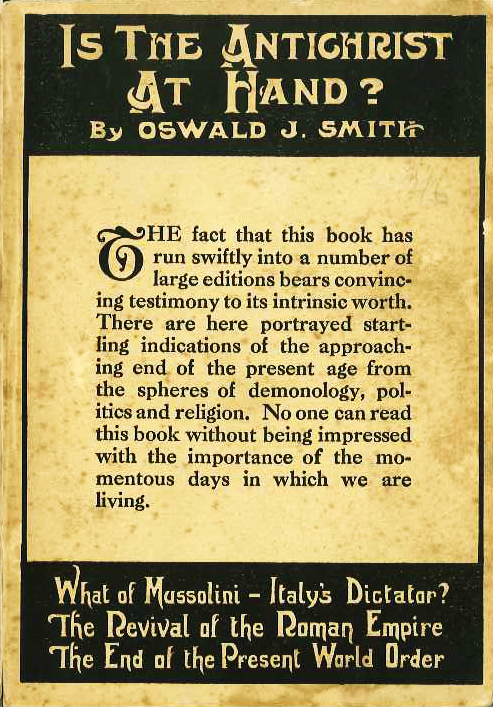 Those who are new to the world of Bible prophecy have no idea how many of today’s end-time “authorities” have made predictions that did not come to pass or how many of their predecessors also miscalculated when the end would come. Today’s prophecy neophytes are under the false assumption that what they are reading in books and magazines, seeing on television, and hearing on the radio and from pulpits are recently discovered end-time truths of what they believe are current events that match particular prophetic passages. Charles Wesley Ewing, writing in 1983, paints a clear historical picture on how dogmatism turns to confusion and uncertainty when it comes to linking current events to the Bible:

In 1934, Benito Mussolini sent his black-shirted Fascists down into defenseless Ethiopia and preachers all over the country got up in their pulpits and preached spellbinding sermons that had their congregations bulging at the eyes in astonishment about “Mussolini, the Anti-Christ,” and to prove their point they quoted from Daniel 11:43, which says, “And the Ethiopians shall be at his steps.” Later, Benito, whimpering, was hung by his own countrymen, and preachers all over America had to toss their sermons into the scrap basket as unscriptural.8

Ewing goes on to mention how Hitler’s storm troopers took Czechoslovakia, Poland, France, North Africa, and set up concentration camps where millions of Jews were killed in what has become the modern-day definition of a Holocaust. Once again, preachers ascended their pulpits and linked these events to Bible prophecy and assured the church-going public that Hitler was the antichrist. When the allies routed the Nazis and drove them out, sermons were once again tossed out or filed away to be revised at some future date hoping people’s memories would fail.

The next end-time-antichrist candidate was Joseph Stalin, the leader of godless Communism, a movement hell-bent on conquering the world. “But on March 5, 1953, Stalin had a brain hemorrhage and preachers all over America had to make another trip to the waste basket.”9

We’re assured that this time, in our generation, the “prophecy experts” have finally gotten it right. Don’t bet on it. The track record of prophetic certainty is not very good.

You May Not Have Known this About Joan Rivers

Is it Time for Doomsday or for Building a City on a Hill?