Franklin Graham has come out with a broadside against pastors. He describes some of today’s pastors as “cowards” for not addressing the social evils of our day.

“Graham told a large gathering of pastors on [May 22] to address controversial issues from the pulpit, declaring that ‘God hates cowards.’”

Graham based his remarks on Revelation 21:8, a passage that “lists eight groups of people who will be ‘in the lake that burns with fire and brimstone, which is the second death.’”

Grouped with murderers, idolaters, unbelievers, and others, those making up the “first group of persons listed were the cowardly. It was this first group that Graham focused on for his speech, titled ‘Standing Strong on the Controversial Issues,’ at the Thursday evening session for the 2014 Watchmen on the Wall National Briefing.

According to Graham, the definition of a coward is someone who “will not confront an issue that needs to be confronted due to fear.”

“God hates cowards. And the cowards that the Lord is referring to are the men and women who know the truth but refuse to speak it.’” 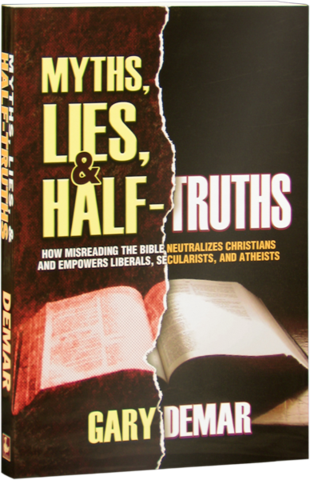 MLHT will help you navigate the many reasons why Christians do not get involved. On sale for Godfather Politics readers: $12.26

Good for him. Finally.

Over the years Franklin Graham has given a mixed message on this subject.

In November 2004, soon after the election, Graham wrote that “Christians must focus on God, not politics” with the obligatory acknowledgment that he has “always used whatever influence and platform [he] had to urge everyone to vote.” Then comes the inevitable “but”:

“But as a minister of the Gospel of Jesus Christ, I have a higher calling than getting out to vote or ‘getting out the vote.’”

When I commented on his statement in a November 30, 2004 article “Franklin Graham Speaks Out, and He’s Only Half Right,” I asked this question:

“I wonder what Graham might say ten years from now when new laws could be passed to keep Christians from preaching the gospel because they didn’t get out to vote because everyone was involved in their higher calling to the inclusion of everything else God considers to be important?”

Well, it’s nearly ten years later, and it seems that Franklin Graham is getting concerned. He set up a false dichotomy in 2004. It was similar to Jerry Falwell’s famous 1964 sermon “On Ministers and Marches” in which he declared, “Preachers are not called to be politicians, but soul winners.”

Falwell eventually took a different approach during Jimmy Carter’s presidency and saw that politics was important and so were education and law and everything else.

The next theological item Franklin Graham needs to reconsider is his insistence that we are living in the inevitability of the prophetic period of the “last days.”

This is a recurring claim going back deep into history every time and there is a moral, civil, and religious concussion. Consider this from Martin Luther (1483-1546):

“The world cannot stand long, perhaps a hundred years at the outside. At the last will be great alternations and commotions, and already there are great commotions among men. Never had the men of law so much occupation how. There are vehement dissensions in our families, and discord in the church.”1

James Dobson had Graham on his May 6, 2010 radio show to discuss anti-Christian measures coming from our government. Both Dobson and Graham saw prophetic significance in these events. They were claiming that the return of Jesus must be around the corner.

If this is the case, then why bother? Nothing can be done to change the inevitable.

Christians could turn this nation around in less than a year if they had the will to do it. But with big-name evangelicals telling them the end must be near, why bother.

The early church had fewer hopeful examples of continued growth with the death of Stephen at the hands of the Jews (Acts 7:54–60) and the death of James the brother of John by the local tyrant Herod (Acts 12:2). At the end of John’s Gospel, Jesus tells Peter that he is going to be martyred (John 21:18–19). The book of Acts ends with Paul under house arrest (Acts 28:30).

It was rough for Christians in the first century and many centuries following. Consider the following from the apostle Paul:

Pastors should be using their pulpits to preach the “whole purpose of God” (Acts 20:27), especially on the issues that are pressing hard against our freedoms.

Another quotation attributed to Martin Luther comes to mind.

“If I profess with the loudest voice and clearest exposition every portion of the word of God except precisely that little point which the world and the devil are at that moment attacking, I am not professing Christ, however boldly I may be proclaiming Christ. Wherever the battle rages, there the loyalty of the soldier is proved and to be steady on all the battlefield besides is mere flight and disgrace if he flinches at that one point.”

Like Franklin Graham, Martin Luther was also a bit schizophrenic. The world as we know it may be coming to an end. We should prepare ourselves to rebuild in the ensuing rubble.

Jennifer Knapp, Shellfish, and the Defense of Homosexuality