The biggest censors in America are liberals. They refuse to have an open discussion of the bad science behind evolution, compare critics of man-made global warming alarmists as comparable to holocaust deniers, and work tirelessly to scrub every vestige of the Bible’s influence on America’s founding.

The latest example comes from the red state of Texas. I’ve always maintained that the major source of America’s problems reside in our nation’s government schools where they are a source of propaganda and censorship:

“Social studies textbooks that have been proposed for use by Texas students next fall are coming under fire by those who take issue with the positively Christian worldview therein, including suggestions that Moses and the Ten Commandments were an influence on the founding of the nation.”

A few days ago, before I read the article where the above quotation is found, I had walked into a large bookstore that had a used book section. While browsing, I saw a book titled America’s Prophet. Intrigued, I pulled it off the shelf and noted the subtitle: Moses and the American Story. This book alone is enough to refute the claims of the critics.

Some critics would do well to read it. for example:

“Southern Methodist University department chair Kathleen Wellman . . . told the SBOE that the effect of the TEKS requirement to find biblical origins for the Constitution would be to make Moses the ‘first American.’ Some historians give that honor to Benjamin Franklin. Whoever might merit it, Moses definitely does not qualify,” he wrote.
Let me give you some examples from my own study of American history why people like Kathleen Wellman are wrong, and Benjamin Franklin would be one of the first people to agree with me.

The Constitution is a relatively short document. While many claim that it is devoid of religious content, in fact, it includes some very interesting biblical mentions. First, it states that it was done “in the Year of our Lord,” a reference to Jesus Christ. Second, it confirms the biblical calendar with one day in seven as a day of rest (Art. I, Sec 7: “Sundays excepted,” a reference to the Sabbath found in the Fourth Commandment). Third, there is the requirement of having “two witnesses”: “No person shall be convicted of treason unless on the testimony of two witnesses to the same overt act, or on confession in open court” (Art III, Sec. 3). This requirement is found in two books written by Moses and quoted numerous times in the New Testament:

The state of Georgia applies the Bible to property cases and surveys used to delineate boundary markers:

“Iron pins are a common and useful means of identifying property corners and they and other similar monuments serve a useful purpose. The installation and maintenance of permanent monuments identifying land corners even preserves the good order of society itself. From earliest times the law not only authorized but protected landmarks. Interference with landmarks of another was a violation of the Mosaic law. See Deuteronomy 19:14; 27:17; Job 24:2; Proverbs 22:28; 23:10. (256 Ga. 54, International Paper Realty Company v. Bethune. No. 43092. Supreme Court of Georgia, June 10, 1986).”

John Adams, our nation’s second President, said this about private property and its biblical connection:

“The moment the idea is admitted into society that property is not as sacred as the laws of God, and that there is not a force of law and public justice to protect it, anarchy and tyranny commence. If ‘Thou shalt not covet’ and ‘Thou shalt not steal’ were not commandments of Heaven, they must be made inviolable precepts in every society before it can be civilized or made free.”1

The early charters and state constitutions are filled with citations from the Ten Commandments.

But let me move on. The Declaration of Independence bases its foundation for rights on the reality that God is the Creator (Gen. 1:1) and that rights are an endowment – a gift – from Him. No God, no inalienable rights. Without God we are left with anarchy or tyranny.

It’s hard to understand the exodus of the Pilgrims from their homelands without being familiar with Moses and the Exodus out of Egypt to the Promised Land. How can students fully appreciate the motivation without knowing America’s history and the use of Moses?

Bruce Feiler, author of America’s Prophet, recounts a trip he took to visit his in-laws on Cape Cod and the tour he took of the Mayflower II:

“A reenactor was reading from the Bible. ‘Exodus fourteen,’ he explained. ‘The Israelites are trapped in front of the Red Sea, and the Egyptians are about to catch them. The people complain, and Moses declares, “Hold your peace! The Lord shall fight for you.” Our leader read us that passage during our crossing.’ Moses, on board the Mayflower.”2

On a trip to Philadelphia, Feiler sees the Liberty Bell that includes this verse from Leviticus 25:10: “Proclaim Liberty Throughout All the Land Unto All the Inhabitants thereof.”

“As the Continental Congress gathered in Philadelphia in 1776, comparisons with the Exodus filled the air. From politicians to preachers, pamphlets to pulpits, many of the rhetorical high points of the year linked the colonists to the Israelites fleeing Egypt. Thomas Paine invoked the analogy in Common Sense, the best-selling book of the year; Samuel Sherwood made it the centerpiece of the year’s second best-selling publication, the Church’s Flight into the Wilderness. And on the afternoon of July 4, after passing the Declaration of independence, the Continental Congress asked John Adams, Thomas Jefferson, and Benjamin Franklin to come up with a public face of the new United States. They chose Moses.”

Feiler is referring to the original design of the seal for the United States that was designed by Jefferson, Franklin, and Adams. Franklin’s proposal is preserved in a note of his own handwriting: 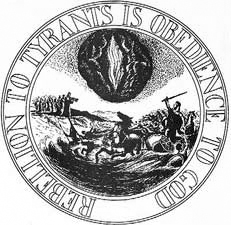 “Moses standing on the Shore, and extending his Hand over the Sea, thereby causing the same to overwhelm Pharaoh who is sitting in an open Chariot, a Crown on his Head and a Sword in his Hand. Rays from a Pillar of Fire in the Clouds reaching to Moses, to express that he acts by Command of the Deity.”

The motto on the seal was to read, “Rebellion to Tyrants is Obedience to God,” the same motto that adorns Virginia’s state seal.

Jefferson suggested the following for the front of the seal should include the children of Israel in the wilderness, led by a cloud by day and a pillar of fire by night.

There is no way to understand the civil rights struggle without understanding Moses and the Exodus.

Maybe these educational critics are ignorant, and if they are, then they should get out of education. Better yet, get your children out of the government schools.