Penn and Teller are great magicians. If you ever get a chance to see one of their shows – do it. You won’t be disappointed.

Penn Jillette, the one who speaks, is an intelligent guy. He has a lot of good things to say. He’s a bit too foul-mouthed for me, but his Vegas magic shows with Teller are mostly devoid of the use of the F-word.

And even though he’s an atheist, I’m not going to dismiss everything he says since he is not a consistent atheist. He can’t be, but that’s another topic for another article.

He has recently made some comments about the Religious Freedom Restoration Act initially passed in Indiana and since gutted by spineless Republicans. He said the following:

[W]e have to make sure that we don’t get too crazy in the hypotheticals, and we are not talking about forcing people to engage in gay sex or even endorse gay sex.

It’s this type of claim that got us into this mess. Since no one will be affected by same-sex marriage, why oppose it? Millions of people fell for the lie. The promise was that if same-sex marriage was permitted, no one would have to be bound by what these supposed married couples were doing.

As we’ve seen, it has not worked out as promised. Business owners are being forced to accommodate same-sex weddings. No one – religious or not – should have to accommodate anything they don’t want to accommodate.

Penn Jillette went on to say, “We are asking them that maybe they can treat people the same as other people, and that does not seem unreasonable.” Homosexuals were being treated the same as other people by the bakers, photographers, and florists. Homosexuals were not being discriminated against as people. What some businesses objected to was servicing a ceremony they did not agree with.

A business does not have to have a religious objection to refuse service to someone or some group. I suspect that businesses turn down business every day in America for all kinds of reasons. Can you imagine an advertising firm being forced to advertise a product or lifestyle it finds repugnant?

It is OK, I suppose, although goofy to be against gays, but it is not OK to be against people who simply want to use your services as a business. I mean the free market should take care of this faster than anything. 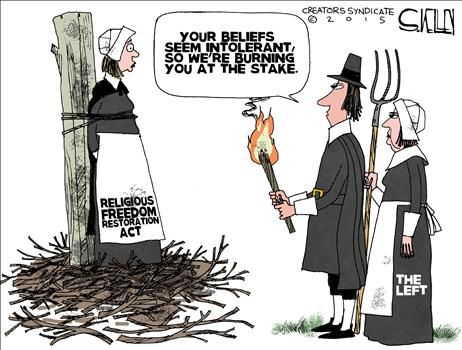 Should a pro-life emailing-sending service be forced to send emails from a pro-abortion group promoting abortion and working politically against anti-abortion groups? If I had enough time and space, I could come up with a hundred examples.

In fact, it’s more than likely that pro-life groups and pro-abortion groups would seek out an email sending service that shared its values.

Let’s say two men walk into a baker and purchase a cake. No problem. They take it to the counter and want some statement and image about gay marriage on it. The owners have no problem selling them the cake, but they refuse to decorate the top of the cake with the requested message. Should the owners be forced to comply?

Second, Penn’s libertarian wisdom finally comes through with this comment: “I mean the free market should take care of this faster than anything.” Exactly!

There is no need for Religious Freedom Restoration Acts. The First Amendment – with its numerous freedom guarantees — has done a good job for more than 230 years.

Was Jesus Buried for Three Full Days and Nights?