Secularism’s March Toward Dehumanization. Who Will Be Next?

Evolutionists get more desperate every day. They spend billions of dollars to send space probes to distant places in the universe to find signs of life so they can once and for all declare that God does not exist. If they can show that Earth is not the only place where life could have evolved, then it proves that there is no god.

So while one group of atheists is trying to find life out there so they can say that humans are not unique down here, scientists down here are working overtime to prove that God is not needed to create unique human life by claiming that homo sapiens are related to vegetables and small rats.

Am I exaggerating? We got here, say the evolutionists, because of millions of years of bloody struggle. Michael Dowd, author of the book Thank God for Evolution!: How the Marriage of Science and Religion Will Transform Your Life and Our World, writes the following in his article “Thank God for the New Atheists”:

Let the story of evolution be told in ways that engender familial love and gratitude, that we are related to everything — not just monkeys, but jellyfish and zucchini, too.

If we’re related to zucchini, and it’s OK to eat zucchini, then, given evolutionary assumptions, is it OK to eat your neighbor? “Man is the result of a purposeless and materialistic process that did not have him in mind. He was not planned. He is a state of matter, a form of life, a sort of animal, and a species of the Order Primates, akin nearly or remotely to all of life and indeed to all that is material.”1 Is the step up in violence that we are seeing today a result of people believing the evolutionary propaganda they’ve been taught all their lives?

The latest in evolutionary “science” wants us to believe that our distant relatives are “elephants, bats, dogs, cats, and whales” and a rat:

[S]cientists have zeroed in on a tiny, rat-sized animal that they believe to be the common ancestor of many of today’s modern mammals — including us. This furry little critter lived 66 million years ago, scurrying under the feet of big ’ol dinosaurs and subsisting primarily on a diet of insects.

If she bit to survive to move up the evolutionary ladder back then, then why can’t we bite (or do worse) to survive today? Survival of the fittest is the mainstay of the evolutionary worldview. If it was OK for our distant ancestors to do what was necessary to make the great evolutionary leap forward, then why can’t we? When people are not thought of as image-bearers of God but bags of meat and bones whose existence is the result of chance plus violence, who’s to say anything is morally wrong?

Dehumanization has led to unspeakable atrocities. Blacks were not as evolved as white people, were less than fully human, and were sold as property.

Consider the subtitle of Darwin’s On the Origin of Species by Means of Natural Selection, or the Preservation of Favoured Races in the Struggle for Life. Who or what’s doing the selecting? 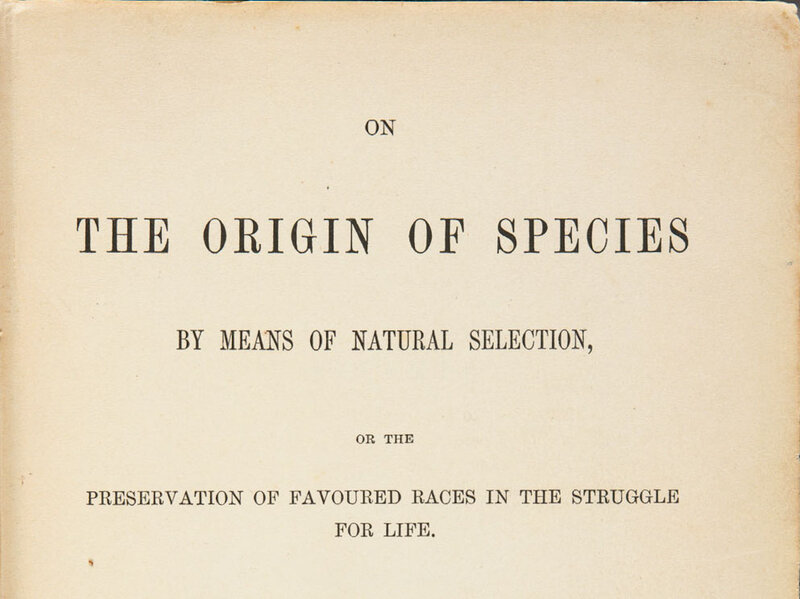 Dehumanization was going on long before Darwin. Aristotle believed that some people were by nature slave material.

Of all the ideas churned up during the early tumultuous years of American history, none had a more dramatic application than the attempts made to apply to the natives there the Aristotelian doctrine of natural slavery: that one part of mankind is set aside by nature to be slaves in the service of masters born for a life of virtue free of manual labour.2

But it’s different today. Dehumanization is covered by the veneer of science. Children are being taught they are animals related to other lesser animals. If you go back far enough, we can trace our origin to a soup of chemicals where the fight for survival made us what we are today. It’s all so scientific.

In the 19th century, Robert L. Dabney (1820–1898) made this correlation between evolution and morality:

If mine is a pig’s destiny, why may I not hold this “pig philosophy”? Again, if I am but an animal refined by evolution, I am entitled to live an animal life. Why not? The leaders in this and the sensualistic philosophy may themselves be restrained by their habits of mental culture, social discretion and personal refinement (for which they are indebted to reflex Christian influences); but the herd of common mortals are not cultured and refined, and in them the doctrine will bear its deadly fruit.”3

Abortion is being used for eugenic reasons as Justice Clarence Thomas recently pointed out in his concurring opinion (beginning on page 5) in Box v. Planned Parenthood of Indiana and Kentucky.

In George William Hunter’s A Civic Biology, the textbook that was the issue in the 1925 Scopes Trial, was filled with eugenic references. “Hunter believed that society could perfect the human race by preventing intermarriage between people such as the mentally ill, criminals, and epileptics.”Such a view would have meant the abortion of one of my daughters-in-law and a grandchild. He also believed that the Caucasian race was the highest type of all the races. Hunter’s solution for poorly evolved humans is frightening in light of how today’s Progressive Movement defines its ideological opponents:

So the next time you hear of some guy killing his fellow-man indiscriminately, he may believe he’s ridding the world of rats or thought he was a tasty zucchini. Life is cheap. “At least 52 people were shot across Chicago over the weekend [May 31-June 2], the most violent of the year as summer gets underway, with a toll even higher than during the long Memorial Day holiday just a week earlier.” (Chicago Tribune) Were the shooters fulfilling the evolutionary mandate of onward and upward by any means possible?

Secularism’s March Toward Dehumanization. Who Will Be Next?