Jeff Schweitzer is a scientist and former White House Senior Policy Analyst. He holds a Ph.D. in marine biology/neurophysiology. He’s obviously a smart guy, but he needs to spend more time checking out the facts related to Christianity and the founding of America. America did not begin in 1787, and there’s more to the impact that Christianity had on the nation than the writings of five or six founders.

In this article, I will only be dealing with one item claimed by Dr. Schweitzer. I’ve addressed most of his claims elsewhere.

Recently, Schweitzer wrote “Founding Fathers: We Are Not a Christian Nation.” He immediately goes off track with the following quotation that he attributes to John Adams with no documentation (see image below):

“The government of the United States is not, in any sense, founded on the Christian religion.” 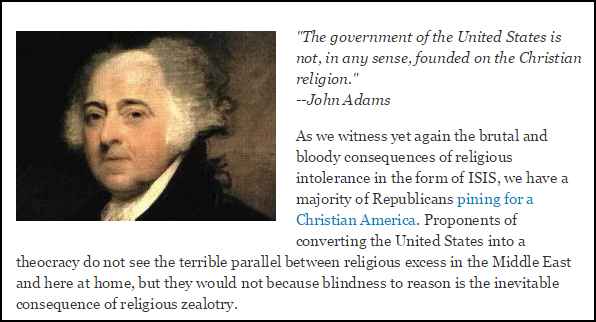 The Encyclopedia of Philosophy concocts a story of how George Washington “acquiesced” to the radical deistic views of Joel Barlow, then American consul in Algiers. Here is how the story is told:

“In answer to a direct question from a Muslim potentate in Tripoli, Washington acquiesced in the declaration of Joel Barlow, then American Consul in Algiers, that ‘the government of the United States of America is not in any sense founded on the Christian religion.’”1

This is pure fiction. Washington had no direct involvement with the Treaty. He had left office before the Treaty was signed.

So what is the origin of the citation? It’s found in a 1797 treaty with the Muslim territory of Tripoli. Adams signed it, and so did a unanimous Congress, most of whom were orthodox Christians. How can this be explained given the fact that America has a rich Christian heritage exemplified in various state constitutions and official declarations? Forrest Church offers this bit of commentary on Article 11 of the Treaty of Peace and Friendship between the United States and Tripoli:

“Too much can be made of this document as a proof text that Adams believed, as the treaty says, that ‘the United States is by no means founded on the Christian religion.’ Washington, Jefferson, and Madison certainly could have endorsed this clause, but Adams, at this point in his political career, anyway, could not. . . . At the time Adams expressly believed that the U.S. government could not prosper apart from a sound Christian foundation.”2

The statement in the 1797 treaty was a declaration “that ‘the Christian religion’ as a formal institution was not a part of the American government in the same way that the religious structures of Islam are a part of Islamic governments.”3 The statement was to assure a Muslim government that America would not depose that government and impose Christianity by force, something Islamic nations do.

If the United States was a Christian nation in the same way that Muslim nations were Islamic, Muslims would not sign such a treaty.

Our own government today makes accommodations with Muslim nations by removing crosses and forbidding passing out Bibles. There was a directive given to U.S. soldiers on how they were to act during Ramadan. The late self-professed anti-theist Christopher Hitchens commented: “[T]hose secularists like myself who like to cite this treaty must concede that its conciliatory language was part of America’s attempt to come to terms with Barbary demands.”4.

The Barbary pirates habitually preyed on ships from “Christian nations,” enslaving “Christian” seamen. Since the treaty with Tripoli was a treaty between the United States and an Islamic government, was America not one of these Christian nations? Joseph Wheelan’s historical assessment of the time is on target. “Except for its Native American population and a small percentage of Jews, the United States was solidly Christian, while the North African regencies were just as solidly Muslim — openly hostile toward Christians.”5

In drafting the treaty, the United States was assuring the Dey (ruler) of Tripoli that in its struggle with the pirates “it has in itself no character of enmity against the laws, religion or tranquility of Musselmen” (an archaic designation for Muslims], that “the said states never have entered into any war or act of hostility against any Mehomitan [Muslim] nation” due to religious considerations. These are the qualifying statements found in the treaty that explain why the phrase “founded on the Christian religion” was used.

In what way is the “government of the United States of America . . . not in any sense founded on the Christian Religion”? Here’s the passage in context:

“As the government of the United States of America is not in any sense founded on the Christian Religion, — as it has in itself no character of enmity against the laws, religion or tranquility of Musselmen, — and as the said States never have entered into any war or act of hostility against any Mehomitan nation, it is declared by the parties that no pretext arising from religious opinions shall ever produce an interruption of the harmony existing between the two countries.”

The Dey of Tripoli had to be convinced that America, as a Christian nation based on the reading of the state constitutions and other official documents, would not impose its religion on the Muslim people. Our own Constitution references Jesus Christ with the phrase, just above George Washington’s signature, “Done in Convention by the Unanimous Consent of the States present the Seventeenth Day of September in the Year of our Lord one thousand seven hundred and Eighty seven and of the Independence of the United States of America the Twelfth. . .”

In the Annotated Translation of 1930, there’s mention of “American Christians,” “Christian enemies,” “Christians with whom we are at peace,” and “like all the other Christian nations.” Presumably this means that Tripoli considered the United States to be a Christian nation as well as other nations at the time.

It is important to note that the 1805 treaty with Tripoli, drafted during Thomas Jefferson’s administration, differs from the 1797 Treaty in that the phrase “as the Government of the United States of America is not in any sense founded on the Christian Religion” is conspicuously absent.

Article 14 of the new 1805 treaty corresponds to Article 11 of the first treaty of 1797. It reads in part: “[T]he government of the United States of America has in itself no character of enmity against the laws, religion, or tranquility of Musselmen.” Once again, the issue of American interference in the internal affairs of an Islamic nation is at issue, the same issue that was stated in the 1797 treaty. Assurances are still offered that the United States will not interfere with Tripoli’s religion or laws. It’s obvious that by 1805 the United States had greater bargaining power and did not have to knuckle under to the demands of this Muslim stronghold. A strong navy and a contingent of Marines also helped.