Hollywood is about fantasy. What we see up on the big screen is not real. Actors are not shot with real bullets. Steve Buscemi was not put through a wood chipper in Fargo. No one died in the sniper battle between Jude Law and Ed Harris in Enemy at the Gates (2001). Harris, playing German sniper Major Erwin König, “survives” a direct shot to the head by Jude Law’s non-existent bullet.

All the corpses during the filming of the Battle for Stalingrad get up after the director says “cut” to go home to their families.

We can’t say the same thing about abortion. That’s real blood and deaths, about 4000 every day in the United States.

Many (most?) actors and actresses in Hollywood seem to think that abortion is part of some Hollywood script. Like the films they’re in, no one really gets hurt. The sad fact is, somebody always dies.

Johansson describes abortion as liberation; liberty for her but not for the unborn children that are killed by their mothers.

To show her undying support for the real bloody business, Johansson has designed pink T-shirts that read on the front, “Hey Politicians! The 1950s called.” On the back, the shirts say: “They want their sexism back!” Text on the left sleeve is signed, “Love Scarlett Johansson.” 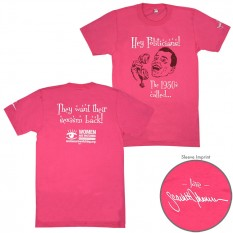 Not wanting to kill unborn babies is sexism? This is almost as bad as George Costanza’s comeback line from a Seinfeld episode: “Well, the Jerk Store called, and they’re running out of you.”

If Johansson really believes in abortion, why not put a picture of the “product of conception,” a euphemism designed to divert people’s attention from the reality that an unborn child is being killed, on the front with the following text:

But when someone like Johansson supports killing unborn babies, we really can’t expect her to tell the truth about a decision from the Supreme Court. Abortion must be defended at all costs. Lying is acceptable for the cause.

Ann Coulter has described abortion as a liberal sacrament. She writes the following in her book Godless: The Church of Liberalism:

“No liberal cause is defended with more dishonesty than abortion. No matter what else they pretend to care about from time to time—undermining national security, aiding terrorists, oppressing the middle class, freeing violent criminals—the single most important item on the Democrats’ agenda is abortion. . . .

“The Orwellian dishonesty about abortion begins with the Left’s utter refusal to use the word abortion. It would be as if members of the National Rifle Association refused to use the word gun. These ‘pro-choicers’ treat abortion the way Muslims treat Mohammed. It’s so sacred, it must not be mentioned. Instead we get a slew of liberal euphemisms for baby-killing: ‘reproductive freedom,’ ‘a woman’s right to control her own body,’ ‘terminating a pregnancy,’ ‘freedom of choice,’ ‘a woman’s own private medical decision,’ ‘a procedure,’ ‘access to health care,’ ‘family planning,’ ‘our bodies, our selves,’ ‘choice.’ Choice is important when it comes to killing babies, but not so much when it comes to whom you hire, whom you associate with, what you think about evolution, how much gas your car consumes, how much water comes out of your bathroom showerhead…. The only other practice that was both defended and unspeakable in America like this was slavery….

“Abortion is the sacrament and Roe v. Wade is Holy Writ.”

And Scarlett Johansson is willing to sign her name to it.