I’m not much of a beer drinker. If the beer is really cold and I’m really thirsty, I might drink half a bottle.

I have friends who like to drink beer. I even have a son who actually makes his own beer. I haven’t heard many of my beer drinking friends say much about the beer made by the Boston Beer Company makers of Samuel Adams Beer.

The same is true for beer companies Guinness and Heinekein. Here’s a statement from Guinness:

“Guinness has a strong history of supporting diversity and being an advocate for equality for all. We were hopeful that the policy of exclusion would be reversed for this year’s parade. As this has not come to pass, Guinness has withdrawn its participation. We will continue to work with community leaders to ensure that future parades have an inclusionary policy.”

Given the history of Ghinness, it’s unlikely that homosexuality would have been an “inclusionary policy” of the company.

It might surprise a lot of people that the Guinness brewing company was started by a Christian, Arthur Guinness. “His children . . . built the Guinness corporation on the strength of their father’s vision and faith. This is what became the great legacy of the Guinness family.” For a fascinating history of Guinness, see The Search for God and Guinness: A Biography of the Beer that Changed the World by Stephen Mansfield.

Here’s a short video by the author explaining bit of the history of Guinness.

I suspect that the parade organizers would have prohibited pro-polygamy, pro-adultery, pro-NAMBLA, and pro-incest groups to join in the festivities as well

The issue is not about people; it’s about what people do and what most people consider to be immoral and don’t wanted presented as if such behavior is morally acceptable.

This battle has been going on for some time. As is usual for liberals, they never give up and will continue to press the matter even though the Supreme Court has ruled on this issue nearly 20 years ago:

“The Supreme Court ruled unanimously in 1995 that the South Boston Allied War Veterans Council had a constitutional right to exclude marchers whose message they reject, including those who seek to identify themselves as gay, lesbian, and bisexual Irish-Americans. The parade, one of the biggest St. Patrick’s Day parades in the nation, draws as many as one million people to South Boston.” (source)

Mayor Martin Walsh will also be boycotting the annual Boston parade and New York City Mayor Bill de Blasio announced announced that he will “not be marching in this year’s St. Patrick’s Day Parade because organizers will not allow participants to carry gay pride signs.”

Here’s one of the best lines ever from Bill Donohue, President of the Catholic League. First, he said that he was “‘delighted’ that de Blasio would not be there” and second, “the parade is not about homosexuals, or abortion, or anything other than honoring St. Patrick.”

Prior to the decision not to include veterans who advocate for same-sex sexuality, “The Immaculate Heart of Mary School in Harvard said they would pull their float if the homosexual group was permitted to march they did not “want to appear to be condoning the ‘homosexual lifestyle.’”

The brewers of Sam Adams’ beer might want to consider the views of their company’s namesake and their state’s former governor: 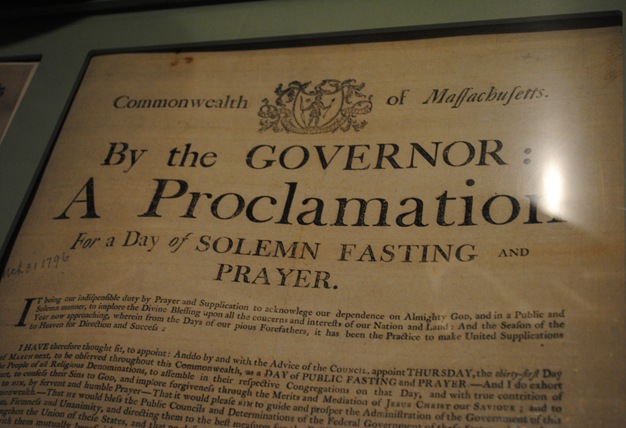 “I conceive we cannot better express ourselves than by humbly supplicating the Supreme Ruler of the world . . . that the confusions that are and have been among the nations may be overruled by the promoting and speedily bringing in the holy and happy period when the kingdoms of our Lord and Savior Jesus Christ may be everywhere established, and the people willingly bow to the scepter of Him who is the Prince of Peace.”1

In addition, to Sam Adams (1722-1803), St. Patrick would be horrified if he knew that a parade in his honor was being sabotaged to promote same-sex sexuality.

For a brief history of St. Patrick, see the article “How St. Patrick Changed History” by William J. Federer.