When 60 percent of the voting public in Ireland voted to redefine marriage, the gaysters screamed with wild euphoria. They were finally being recognized for their sexual proclivities.

Don’t think, however, that this vote stops them from snuffing out all opposition. They’ve only just begun. Any word of dissent will be smashed. It’s already happening. Anybody refusing to acknowledgement the moral legitimacy of same-sex sexuality will be crushed.

“A Northern Ireland bakery has been found guilty in a landmark ruling of discrimination for refusing to bake a cake with a pro-gay marriage theme.

“Ashers Baking Company received worldwide support from evangelical and born-again Christians over its refusal to make the cake for a local gay rights activist in the region.

“But a judge in Belfast high court on Tuesday ruled that the family-owned firm was guilty of discriminating against Gareth Lee on the grounds of sexual orientation.”

I predict that job applications will soon ask a person’s views on same-sex marriage. This will most likely take place in the government and will expand to include the educational establishment and courts. Anybody who refuses to answer or does not approve of same-sex sexuality will not be hired.

To demonstrate how irrational same-sexers are who see homosexuality in everything, when the vote came in approving same-sex marriage, a number of posts on Facebook declared that God must have been in favor of the affirming vote because someone saw a double rainbow.

So what about the rainbows that appeared when 30 states in the United States voted against same-sex marriage? The difference is that rational people don’t make these types of claims for their views.

Seeing a rainbow or not seeing one has nothing to do with truth. Abusing the real meaning of the rainbow as a sign is just another indicator of the type of perversion we are dealing with.

If homosexuals want to see a real correlation between homosexuality and a “sign,” I suggest they take a look at disease statistics as reported by the Centers for Disease Control and Prevention (CDC):

A Nicholas Ferroni argues that he “was born a sinner,” according to his reading of the Bible or what someone most likely told him the Bible says, because he is left-handed. Where do people get this stuff? it’s no wonder that young people turned out in droves in Ireland to vote for normalizing same-sex sexuality. They are grossly uneducated and mostly indoctrinated with some really stupid stuff. 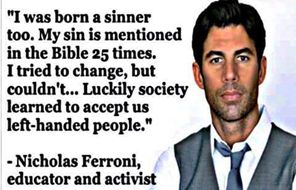 The Huffington Post describes him as “a revered educator and historian who mentors his mostly lower-income students with deep personal commitment and care.”

If this guy is an educator, we are in deep trouble.

There is nothing evil about left-handedness in the Bible. In fact, Benjamin, one of the 12 tribes of Israel, was left-handed. Benjamin means “son of the right side.”

“Ehud the son of Gera, the Benjamite, a left-handed man,” was raised up by God to be a “deliverer” for Israel.

Here are some examples from the Bible on how the left hand is highly regarded.

Other times, the right hand is used for blessing, basically because it is the dominant hand.

Regarding the left hand in a negative way is mostly cultural and is often associated with hygiene:

“Hand use and specific gestures take on considerable significance in certain cultures. The most common popular belief about hands, for instance in Hindu, Islam, and some African cultures, is to consider the left hand as ‘unclean’ and reserved solely for ‘hygienic’ reasons, while it is thought culturally imperative to use the right hand for offering, receiving, eating, for pointing at something or when gesticulating.”

With all the rules regarding washings and being “unclean” in the Bible, nothing is said about the left hand.

On the cultural side of using the right hand for eating, see the Morocco restaurant scene in the film The Man Who Knew Too Much (1956) with Jimmy Stewart and Doris Day: “always the left hand in the lap.” 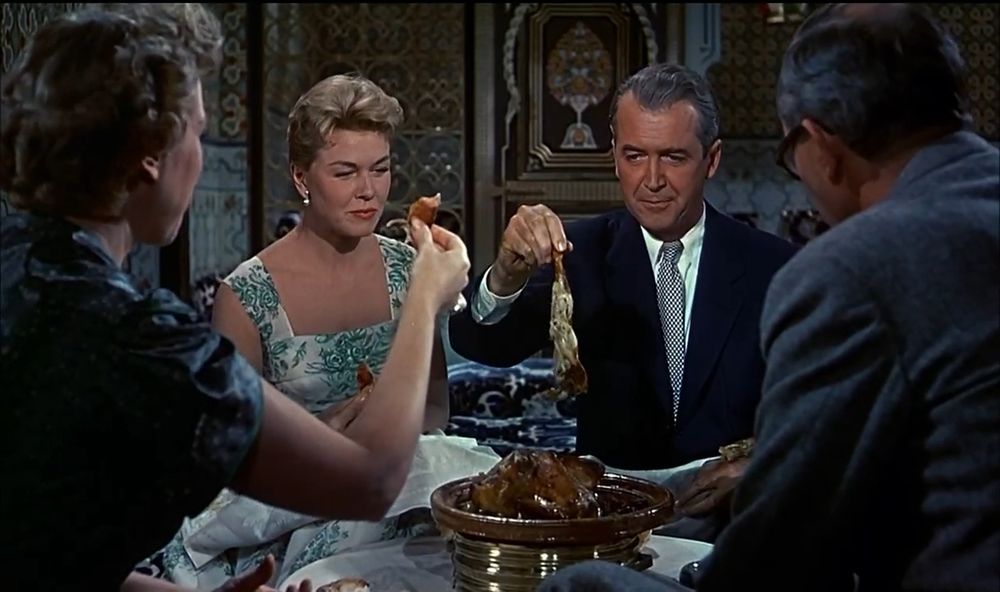 From the film “The Man Who Knew Too Much.”

When Science Doesn’t Matter to Liberals