Pastors Show Backbone and Tell IRS to Take a Hike

Most pastors don’t like to cause trouble. They have enough on their plates that they don’t relish the idea of getting in a political brawl with the government and one of its most powerful agencies – the IRS.

The needless fear of an audit by the IRS is enough to keep pastors and their pulpits in line. The pastors have their inalienable rights granted to them by God and a second layer of protection in the First Amendment on their side.

The First Amendment is clear that Congress cannot make any law that would prohibit the free exercise of religion. This freedom is as absolute as that of the press.

A 1954 IRS rule written by then-Sen. Lyndon B. Johnson (D-Texas) to keep non-profit groups from attacking him is unconstitutional since it infringes on the clearly stated First Amendment prohibition that would interfere with the free exercise of religion. Not only do liberals misquote the Constitution by claiming that it require the separation of church and state, which to them means a complete separation of God and government which none of our founders embraced, but when it comes to silencing the church, they have to appeal to a ruling by the IRS passed by Congress in opposition to the actual wording of the First Amendment. 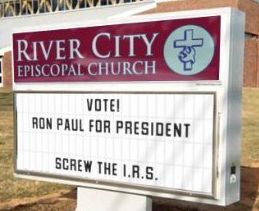 Unfortunately, too many pastors have fallen for the charade and many more have hidden behind it so they do not have to take a stand on the issues of the day.

Now those issues are overwhelming the church with lawsuits, fines, and threats of jail time for non-compliance. The Houston petition affair may have awakened the church. I’m afraid, however, that many of these pastors threatened with subpoenas believe they’ve won the war rather than a single battle. I suspect that many will go back to preaching like the threat to the church is over.

Many pastors are taking up the threats by organizations like the Freedom From Religion Foundation (FFRF) and Americans United for Separation of Church and State and challenging their threats to their inalienable and First Amendment rights by boldly speaking out on the issues of the day from the pulpit as Politico.com reports:

Their message to the IRS: Sue me.

“But the tax agency is doing anything but. Although the IRS was sued itself for not enforcing the law and admitted about 100 churches may be breaking the rules, the pastors and their critics alike say the agency is looking the other way. The agency refuses to say if it is acting.

“At the same time, the number of pastors endorsing candidates in what they call Pulpit Freedom Sunday jumped from 33 people in 2008 to more than 1,600 this year, according to organizers, Alliance Defending Freedom. And this year, they’ve stepped up their drive, telling pastors to back candidates any Sunday up until the election, not just one Sunday as in past years.”

The tactic of these anti-Christian organizations has been to go after a small church here and there and threaten them with expensive legal challenges and the possible loss of their tax-immune status. (Not tax-exempt. There’s a difference.)

With so many churches participating in defying the FFRF and the IRS, it’s going to be difficult to rein in the rogues.

“The church leaders are jumping in high-profile races that will help decide the Senate and tight governor races across the country, endorsing candidates from Thom Tillis (R) over Sen. Kay Hagan (D) in North Carolina to Senate Minority Leader Mitch McConnell (R) over Alison Lundergan Grimes (D) in Kentucky.

“Rev. Mark Cowart, pastor at Colorado Springs-based Church For All Nations, suggested good Christians should vote Democratic Colorado Gov. John Hickenlooper out of office in an Oct. 19 sermon, where he endorsed his GOP rival, Bob Beauprez.”

Civil officials who govern contrary to their oath of office and contrary to life (abortion), God-ordained marriage (homosexuality), and the expansion of the State are legitimate spiritual targets as Adolf Hitler was in his day.

“If by chance a member of the IRS gets this sermon and is listening, sue me,” said evangelical pastor Jim Garlow of the San Diego-based Skyline Church, after backing Democratic Rep. Scott Peters for reelection. His Republican challenger, Carl DeMaio, is gay, and could advance a “radical homosexual agenda,” Garlow warned.

Barack Obama on Christianity and Islam in His Own Words

Pastors Show Backbone and Tell IRS to Take a Hike