The No. 1 Way to Make a Berkeley Protester’s Head Explode

The University of California Berkeley is in the news for its anti-free speech policies that only apply to conservative speech.

Liberals have used the American system of liberty and freedom to gain power and then shut the door behind them once they are in power.

The Berkeley “Free Speech Movement” of the 1960s is a perfect example. It was the catalyst for the near overthrow of the university system in the United States.

“The Free Speech Movement (FSM) at the University of California at Berkeley during the Fall 1964 semester was the first of the 1960s campus student movements to make headlines all over the world. Lasting a little over two months, it ended with the arrest of 773 persons for occupying the administration building, the removal of the campus administration, and a vast enlargement of student rights to use the University campus for political activity and debate.”

After years of struggle, the Free Speech Movement got its way. In time, the activists took positions in the major universities, changed the curriculum, and set up anti-speech codes. They used the wedge of free speech so they could cut off competing speech.

The administration at UC Berkeley is shutting down conservative speakers claiming “security concerns, pointing to the anticipated dangers posed by an organized group of black-clad, mask-wearing agitators and demonstrators self-styled as the ‘antifa’ (short for ‘anti-fascist’), whose goal has been to use violence to silence any speech they find objectionable.” (The Hill)

If this is true, then the university should arrest the agitators not deny people like Ann Coulter the right to speak. As it is, the barbarians are not at the gate. They have entered the once hallowed halls of institutional learning.

It seems that the administration is unaware of the school’s motto: “Let there be light.” The protestors and many students at UC Berkeley and at most college campuses would be horrified to the point of having their heads explode if they knew that the motto is taken from the first chapter of Genesis (1:3). I suspect that most college students are so ignorant of the Bible (and much else) that they have no idea of the motto’s source.1

The seal (see below) is still used by the University. The open book on the seal looks like a Bible. If the book represents openness to knowledge, then it is a clear indictment of the UC Berkeley of today.

It seems, however, that the school’s administration is afraid of the light. The following Bible verse comes to mind: “This is the judgment, that the Light has come into the world, and men loved the darkness rather than the Light, for their deeds were evil” (John 3:19; also 1:4; 8:12; 9:5; 12:46).

The founders of nearly every early American college understood this principle.

Harvard (1636): “Let every Student be plainly instructed, and earnestly pressed to consider well, the main end of his life and studies is, to know God and Jesus Christ which is eternal life (John 17:3) and therefore to lay Christ in the bottom, as the only foundation of all sound knowledge and Learning. And seeing the Lord only giveth wisdom, let everyone seriously set himself by prayer in secret to seek it of him (Prov. 2:3).”2 Here’s another version of the seal. Note that the book in the bottom half of the seal is face down and spine up. It represents discoverable knowledge, things not yet known. “For with You is the fountain of life; in Your light we see light” (Psalm 36:9). 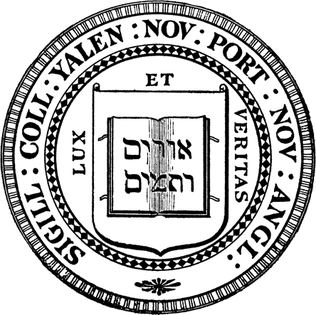 Columbia (originally King’s College): “[T]he college is represented by a woman sitting on a throne, with several children (her pupils) at her knees. Beneath them is a reference to 1 Peter 2:1-2, expressing the way in which the children should receive instruction: ‘laying aside all malice and guile and as new-born babes, desire the sincere milk of the Word, that ye may grow thereby.’ The woman has her left hand on one child and holds open a Bible in her right hand, and the words LOGIA ZONTA, an allusion to St. Stephen’s words in Acts 7:38 meaning roughly “the Living Word” (or in President Samuel Johnson’s time the ‘Lively Oracles’) are written in Greek. The Hebrew Tetragrammaton, YHVW (Jehovah), appears within a radiant triangle. The school’s motto In Lumine Tuo Videbimus Lumen, meaning “In Your light we see light” (Psalm 36:9), arcs across the top. Out of the woman’s mouth is a label with the words Auri Al, ‘God is my Light,’ alluding to Psalm 27:1 (‘The Lord is my light and my salvation’). In the background is a rising sun, alluding to Malachi 4:2, a prophecy of Christ that ‘The Sun of Righteousness shall arise with healing in his wings.’ Lastly, all this is surrounded by the latin text Sigillum Collegii Columbia Novi Eboraci, ‘Seal of Columbia College, New York.'” (Wiki)) Dartmouth (1769): “A Voice Crying in the Wilderness” (Vox clamantis in deserto: Isa. 4:3; John 1:23). In the inverted triangle are the Hebrew words translated “God Almighty.” Notice the open book, which is a Bible with a missionary bringing the message of the gospel to the Indians.

Princeton (originally the College of New Jersey) (1748): The seal was “used for almost a century and a half” until the College became Princeton University in 1896 and “comprised the following details: In the upper part of a circle, an open Bible with Latin characters VET NOV TESTAMENTUM signifying the Old and New Testaments. Over the Bible, the motto VITAM MORTUIS REDDO (I restore life to the dead.) Underneath, on the right, a table with books signifying scholarship. On the left, a diploma, signifying the goal of the student. On the outside of the circle, SIGILLUM COLLEGII NEO-CAESARIENSIS IN AMERICA (seal of the College of New Jersey in America).” (Source)

Today’s major universities have been taken over by materialists. As materialists, they have no way to account for morality. The founders of the University of Pennsylvania (1755) understood that “Laws without morals are in vain (or useless).” I would go further and say, “are irrational and destructive.” We have to remember that even though many our founding fathers were not Christians, they operated in the context of a Christian worldview where they could agree that a Creator endowed them with rights.

They were living off accumulated Christian capital. That capital has nearly run out. It’s our job to restore it.

The No. 1 Way to Make a Berkeley Protester’s Head Explode