Tom Perez, the new radical Leftist chairman of the Democratic National Committee, is not only foul-mouthed, but he’s a merchant of death. First, there was this:

“During an interview on MSNBC’s Morning Joe on April 4, new DNC Chair Tom Perez doubled down on his statement during a rally in Newark, N.J., on March 31 that Republicans ‘don’t give a shit about people.’ The swearing was a publicity stunt to try to appear tough and appeal to millennials, who strongly supported Sen. Bernie Sanders during the 2016 Democratic primaries.” (Observer)

That was bad enough and hardly true. Perez’s idea of giving a shit about people is to take money from hard-working Americans and give it to people who did nothing to earn it. In a different era, this would be called slavery.

And what have the policies promoted by Democrats done for tens of millions of Americans? Turned them into slaves of the State who are only good for keeping Democrats in power. The Democrats need a slave base in order to retain power.

Here comes the kicker, real proof that the Democrat Party, led by Perez, is the party that does not “give a shit about people.” According to Perez, here’s what’s required to be a Democrat:

“Every Democrat, like every American, should support a woman’s right to make her own choices about her body and her health. That is not negotiable and should not change city by city or state by state.”

Let me rephrase it:

“Every Democrat, like every American, should support a woman’s right to kill her unborn baby.”

Black voters are the most loyal voting Democrat voting base. Around 90 percent of voting blacks vote for the Party of Death.

I wonder if Beyonce and her supporters are Democrats. They are. Beyonce stood next to Hillary Clinton and made it clear that she was “with her.” Beyonce is pregnant with twins, her unborn babies are called “babies.”

“Now, isn’t that odd? Abortion fanatical leftists are typically quick to euphemize anything associated with abortion in [an] attempt to make the fatal procedure more palatable. It doesn’t matter that that [an] unborn six-week-old baby has a heartbeat, by endlessly referring to the baby as a fetus and conflating the practice of killing said unborn baby as ‘healthcare,’ abortion almost seems acceptable.

“But, as we see here with the divine Beyonce, her babies are called babies even by abortion fanatics. In fact, Beyonce herself humanized her human babies, writing, ‘I have three heartbeats.'” (Daily Wire) 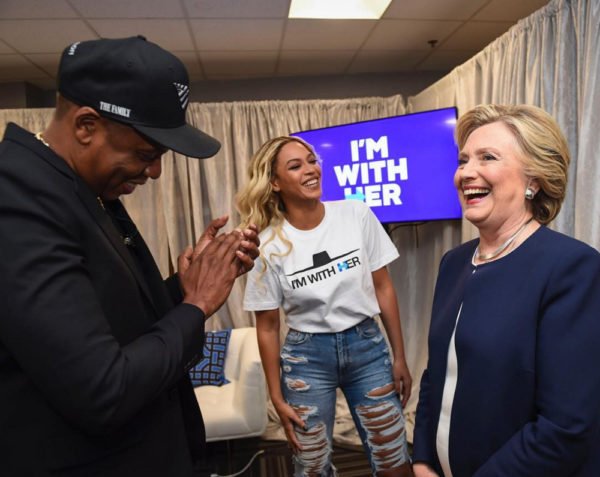 Does Beyonce believe that it would be OK to abort her two babies, the babies with heartbeats? If she were to ask Hillary and Tom Perez, they would say, “It’s your choice. You may think they’re babies, but they’re really not. You get to determine if they are truly human. But even if they are, it’s still your choice.”

Serena Williams is pregnant. She is addressing her unborn baby (not “fetus”) as “My Dearest Baby. . . I can’t wait to meet you.” (Yahoo)

Serena is a Jehovah’s Witness which means she does not vote. (Hollywood Reporter) I wonder if Beyonce and Serena are aware of the Black Genocide going on in America.

A billboard located in minority neighborhoods might get some people to think about what they are doing when they decide to kill their preborn babies since abortion has been described by some black leaders, including Jesse Jackson, as “genocide.”

In the same issue of Jet Magazine, the Black Panther Party equated “abortion with Black genocide” (15-16).

Here are a few statistics that blacks might not be aware of:

How long do you think abortion would be legal in America if blacks actually thought about the long-term consequences of this government-supported atrocity mostly supported by the Democrat Party, a party they support with almost religious fervor?

The No. 1 Way to Make a Berkeley Protester's Head Explode