NY State Sen. Liz Krueger had this to say about the bill:

This is a simple bill that serves an important purpose – to keep in place standards we have had in this country for over sixty years that shield not-for-profits and houses of worship from political entanglement. The administration in Washington has repeatedly said they want to repeal these protections and open the door for big-money donors to launder campaign contributions through churches, mosques, and synagogues.

In 1954, Lyndon Johnson did not like the idea that certain non-profit groups were targeting his political campaign, so he enlisted Congress to pass a law that prohibited 501(c)(3) organizations from addressing the issue of politics.

Most houses of worship fall into the 501(c)(3) category. The following is from the IRS:

The ban on political campaign activity by charities and churches was created by Congress more than a half century ago. The Internal Revenue Service administers the tax laws written by Congress and has enforcement authority over tax-exempt organizations. Here is some background information on the political campaign activity ban and the latest IRS enforcement statistics regarding its administration of this congressional ban.

In 1954, Congress approved an amendment by Sen. Lyndon Johnson to prohibit 501(c)(3) organizations, which includes charities and churches, from engaging in any political campaign activity. To the extent Congress has revisited the ban over the years, it has in fact strengthened the ban. The most recent change came in 1987 when Congress amended the language to clarify that the prohibition also applies to statements opposing candidates.

This so-called ban is a direct violation of the First Amendment. The First Amendment states, “Congress shall make no law….” In 1954, Congress made a law prohibiting churches from speaking out on political issues and endorsing candidates. The logic is simple. Since Congress passed such a law, then Congress violated the Constitution. This makes the law null and void.

The Civil Rights Movement was a minister-led, Church specific movement. Without the clergy and their congregations, there most likely would not have been such a work. Keep in mind that it was the Rev. Martin Uther King, Jr. who was the leader of the Movement.

How do you think New York’s Johnson Amendment will be applied since Democrats, including Gov. Cuomo, have always used churches to advance their political agenda?

In a searing speech from the pulpit of a black church, New York Gov. Andrew Cuomo told a Brooklyn congregation on Sunday [in 2018] that Donald Trump is a “slick salesman” who fooled many people in this country, but the Democrat said the Republican president hasn’t fooled New Yorkers.

Cuomo would have been in violation of his state’s version of the Johnson Amendment. But that’s OK since he’s a Democrat and he was in a black church.

The following is from the Left-leaning The Atlantic:

It is illegal for clergy to support or oppose political candidates from the pulpit. Houses of worship can host candidate forums and voter-registration drives; pastors and rabbis and imams can even bend the rules a little to advocate “as individuals” at conventions or other events. But for more than 60 years, religious groups have been forbidden from electioneering.

Apparently, a lot of pastors don’t pay attention to this rule. According to a new survey from Pew Research Center, roughly 9 percent of people who have attended religious services in the last few months have heard clergy speak out in favor of a political candidate, and roughly 11 percent have heard clergy speak in opposition. What’s remarkable, though, is how much this is apparently happening at one particular kind of church: those run by black Protestants.

It makes sense that this would be the case for black churches in particular. Black Protestant groups have a long history of political activism, and during this election, a majority of these voters have supported Hillary Clinton. Perhaps they think the stakes of this election are high enough, and the possibility of a Trump presidency is dark enough, to risk the IRS’s wrath. 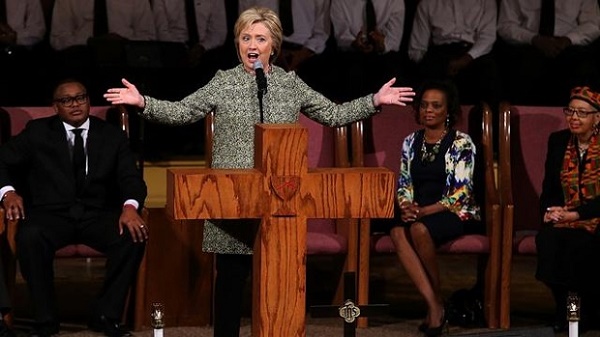 Where was Gov. Cuomo in 2016 when these black churches were breaking the law? It didn’t matter then since Cuomo and his fellow Democrats believed Hillary would win. Now that Trump’s the President and the Democrats have a pitiful stable of candidates, Cuomo needs to keep conservative churches from helping him.

Black churches that support Democrat candidates will continue to violate the law because they know Cuomo and his liberal judges won’t investigate them. Cuomo will only go after conservative churches.

On September 25, 1994, then “President Clinton went to a black church in the heart of Harlem … to rouse a vital constituency to turn out its vote for Gov. Mario M. Cuomo.”1 Clinton wasn’t just talking about political issues of interest to the black congregation, he was telling them to vote for a specific candidate.

Clinton told the congregation: “Do not lose heart. Show up, talk to the people in your neighborhood, tell them to show up. Scripture says we’re supposed to be good citizens, too. Mario Cuomo is the heart that you must not lose.”2 You can’t get any more partisan than this.

An Associated Press report called the President’s message “Bible-thumping politics.”3 Clinton’s message was religious and partisan, as was Governor Cuomo’s remarks as he “also cited religious themes and maxims.”4

A perceptive letter writer noted: “Where is the outrage from the national media and the American Civil Liberties Union? [It’s] the latest example of the conspiracy of silence.”5

Compare the silence of people like Cuomo when the IRS ruled to revoke the tax-exempt letter of the Church at Pierce Creek in Conklin, New York, for taking what the government agency considered to be a partisan stance in a presidential election.6 Of course, this ruling was more symbol than substance since “a federal court of appeals ruled that churches don’t need a tax-exempt letter to be tax-exempt.”7 By their very nature, churches are “tax immune.”

The IRS regulations governing non-profit organizations like churches are being interpreted in such a narrow way will make it impossible for a pastor to discuss moral issues that have become political. The Bible addressed abortion, homosexuality, and homosexual marriage long before there were IRS regulations. This is tyranny.8

Churches are permitted to hand out information about what a candidate believes concerning specific political issues. One candidate says he’s “pro-choice” (pro-abortion), while another candidate says he’s “pro-life” (anti-abortion). The pastor gets up in the pulpit Sunday morning and preaches a sermon on Exodus 21:22–25, showing how this passage and others like it teach that abortion is a moral and civil wrong. The pastor has taken a political stand since anyone voting for abortion is violating God’s law. Cuomo will consider this a violation of his state’s new law.

What people like Cuomo really want is for pastors to be denied the right to address any topic once it becomes political, unless, of course, the church can deliver votes to liberal candidates.