Guns aren’t the problem. People who misuse guns are. The same is true of knives, automobiles, antifreeze, prescription and illegal drugs, fertilizer and fuel oil, and water.

“Police in Savannah were investigating the deaths of two children Tuesday afternoon.
“They said they believe the children were drowned by their mother at their home in the 600 block of 59th Street.
“Savannah NBC station WSAV says police were called to the home by a woman who said she had drowned her children. When they arrived, they removed two children from the home and took them to the hospital, but the children died there.”

This isn’t the first story of a mother who drowned her children. 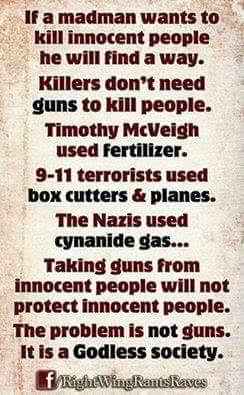 In these cases, water was the killing instrument.

It’s not just mothers who have used water as a killing instrument. Here’s a case from September 2015:

“Officials say an East Texas teen has been accused of pushing a 3-year-old boy into a pond in a drowning allegedly to make room for his pregnant girlfriend’s child to live at a residence.

“An affidavit says Bobby Woods Jr., 17, who lived at the home, says he pushed Mason Cuttler, 3, into the water and left. The suspect’s girlfriend is related to Mason’s father.” (H/T: CBSNews)

“At least 40 young men who drowned may have died by far more sinister means — serial killings at the hands of a national gang that revels in murdering young men and leaving smiley-face markings at the scene, a team of retired New York City police detectives and criminal justice investigators said Monday.” (H/T: Fox News)

Three hundred refugees being smuggled into Europe from Egypt were packed into the lower deck of the ship where they were trapped and purposely drowned. “After they hit our boat they waited to make sure that it had sunk completely before leaving. They were laughing,” one man told the International Organization for Migration.

The heart is more deceitful than all else
And is desperately sick; who can understand it?

I, the Lord, search the heart, I test the mind,
Even to give to each man according to his ways,
According to the results of his deeds. (Jer. 17:9-10).

A sick and deceitful heart will use whatever is handy to be deceitful, evil, and sick.