Dr. Gary North sent me a link to an article about a mob of monkeys. Here’s part of the story:

A man has been ‘stoned to death’ by a group of “rogue” monkeys who threw bricks at him from a tree, according to reports. Dharampal Singh, 72, suffered head and chest injuries in the attack and was later pronounced dead in hospital.

Mr Singh was collecting pieces of dry wood when the group of monkeys launched their attack on Thursday [October 18, 2018]. It is believed the monkeys had armed themselves with bricks they had collected earlier from a rundown building nearby in Tikri, Uttar Pradesh.

Villagers have repeatedly complained that aggressive monkeys in the area have made their lives hell, but the animals are a protected species so little can be done.

There might be some justification of the mobs who are attacking political opponents since science has taught that humans and monkeys share a great deal of genetic material.

We have been told by evolutionists that chimpanzees and humans share nearly 99 percent of their DNA. “In the animal family tree, chimpanzees (Pan troglodytes) are our closest living relative. We share similar life cycles, some underlying biology and a lot of DNA — 99 percent based on the sequencing of the chimp genome in 2005. A 2012 study suggests that we share a similar percentage with bonobos, compared to 98 percent with gorillas.” (SmithsonianMag)

For example, on the left-hand page of a Time/Life Book about mammals, there is a picture of a 15-month-old baby with his arm outstretched facing a chimpanzee on the right-hand page with its arm outstretched, mocking Michelangelo’s depiction of the creation of man–God’s arm and hand outstretched touching the hand of Adam. The following bit of nonsense appeared next to the picture of the human “animal”:

To the untrained eye, this 15-month-old baby human and 2-year-old chimp look quite different. Yet chimps are probably our closest living relatives. They share 99 percent of our genes. Their body structure is startlingly similar to ours. Their behavior, too, is full of “human” traits. A chimp can solve problems, talk in sign language, and make and use tools. As our knowledge widens, it seems that in many ways humans are not as distinctive among mammals as we once thought.1 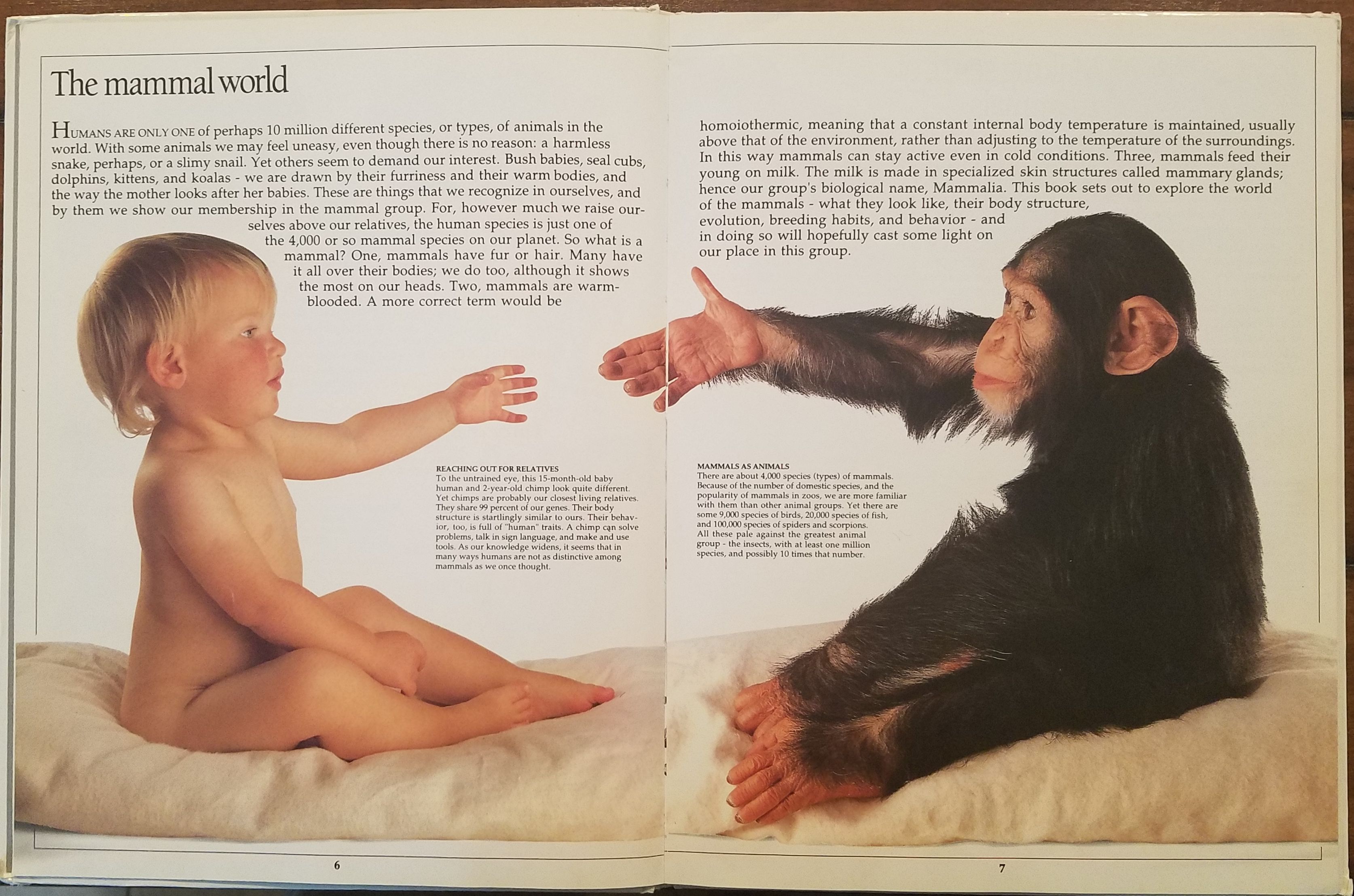 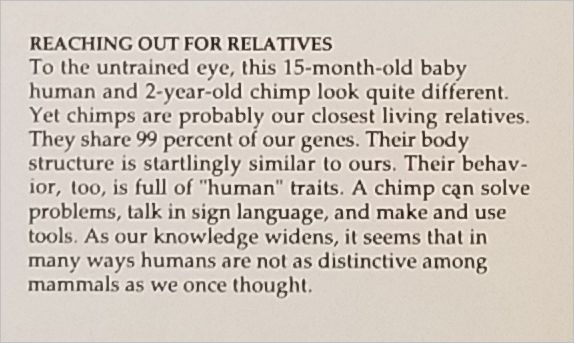 Only the biased eye trained in the dogma of Darwinian evolution can see the supposed similarities. While chimpanzees may be able to communicate in some form of sign language, taught to them by humans, this is no evidence of humanness. Mr. Ed could count with his hoof, but this didn’t make him a human relative. When a chimp starts setting up a school to teach other chimps the art of sign language, then let me know.

The evolutionary worldview teaches that “natural selection” is the mechanism that moves animal species forward. Their upward advance came about through killing the weak, eating the weak, and raping the weak. Survival of the fittest, “nature, red in tooth and claw,” is the operating mechanism that we are told that made us and our world. There is no such mechanism. Evolution can’t do anything because it’s not a “thing.” Nothing is doing any selecting.

As Vishal Mangalwadi demonstrates, it’s the Bible that made our world. 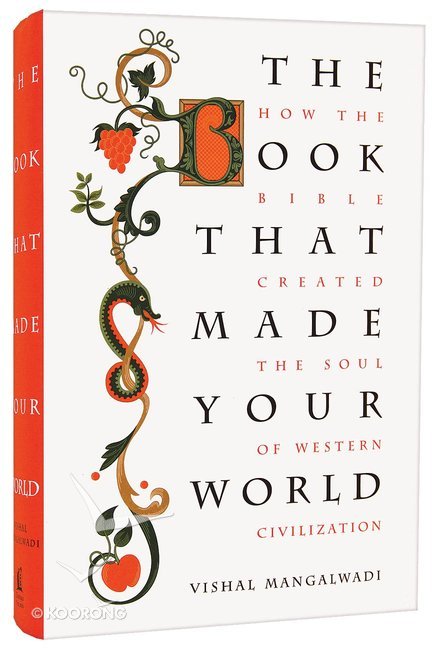 There is no way to account for morality from anyone’s DNA. It’s complete nonsense that humans and chimpanzees share 99 percent of their DNA. In reality, the genetic material that evolutionists claim we share with chimpanzees only measure “2% of our total genetic makeup — that is, those genes that code for proteins, the building blocks of our physical bodies and functions.” This is a huge difference.

Evolutionists are gripped by the idea that we are actually animals and chimpanzees are our closest relatives. Consider this short video of chimpanzees doing what chimpanzees do because they are animals.

Do chimpanzees have a moral code or a justice system? Since they are supposedly so close to us in their genetic makeup, should they be prosecuted for crimes? Naturalist and filmmaker David Attenborough was asked, “What has been your most distressing/upsetting moment in your career?”

Seeing chimpanzees kill monkeys. They do this to eat them. They chase them, set an ambush, catch them, and tear them apart. (Gizmodo)

Did these chimpanzees do anything that’s morally wrong? Remember, there is no God. There is only animated matter that came together over eons of time with no purpose or forethought. All that you see is an accident of something from nothing “creation.” There is no moral or immoral DNA. DNA just is, and as Richard Dawkins writes, and “we dance to its music.”

Here’s the video of what Attenborough is describing:

Stephen Jay Gould (1941-2002), late professor of geology at Harvard and New York University, stated that “no factual discovery of science (statements about how nature ‘is’) can, in principle, lead us to ethical conclusions (how we ‘ought’ to behave) or to convictions about intrinsic meaning (the ‘purpose’ of our lives). These last two questions–and what more important inquiries could we make?–lie firmly in the domains of religion, philosophy and humanistic study.”2 Isn’t this just typical. Science cannot teach us how to live, but religion can. How can this be when most evolutionists are atheists who contend that religion is mythological?

Gould is involved in a dodge by relegating religion to its own sealed box. There is no point, Gould insists, where religion and science have anything to do with one another. “Science and religion should be equal,3 mutually respecting partners, each the master of its own domain, and with each domain vital to human life in a different way.”4 And yet, when it comes to the meaning of life and the “oughts” of behavior, Gould must turn to religion because he cannot find morality in his evolutionary hypothesis. He admitted, “Today, all scientists accept materialism (at least in their workplace), and the philosophically astute realize that it poses no threat to our love for music, subjective insight, and love itself!”5

But if evolution is true–“operating blindly and randomly”6 as evolutionists insist–there cannot be any scientific justification for morality and meaning because these are outside the realm of science. And since today’s evolutionary scientists are materialists, they cannot account for a “subjective insight” like love. In fact, materialism discounts even “insight.” Francis Crick, co-discoverer of the double-helix structure of DNA, sets forth the logical implications of materialism:

Crick’s “astonishing hypothesis” declares that all of our interior states, joys and sorrows, our memories and ambitions, even our personal identity and the cherished notion of free will, are “no more than the behavior of nerve cells.”7

Crick and Gould use the Christian concepts of love, joy, and sorrow simply as labels to identify the impersonal, purely random “behavior of nerve cells.” What’s true for “interior states” is also true for morality. Michael Ruse asserts that morality developed in the same way as hands, feet, and teeth–the “ephemeral product of the evolutionary process.”8 According to Ruse, “Morality,” like gills in fish and lungs in homo sapiens, “is just an aid to survival and reproduction, and has no being beyond this.”9

For evolutionists to do science and live in this world unmolested they must borrow religious presuppositions that are not found or accounted for in a matter-only worldview. If we don’t get back to a Christian worldview, the mob mentality may take over.

What Some Christians and Conservatives Don't Get About Trump