The majority of millennials would prefer to live in a socialist, communist or fascist nation rather than a capitalistic one, according to a new poll…. The most popular socioeconomic order was socialism, with 44 percent support. Communism and fascism received 7 percent support each.” (Washington Times). Were socialism, communism, and fascism defined and their history described? I suspect they weren’t. For many millennials, socialism probably means “to be social”; it’s related to “social media.” Communism is about being in a community. Remember, Barack Obama was a “community organizer.” Community sounds a lot like Communism.

Communism and socialism are all about “sharing.”

You may have seen this Facebook post from a “Club for Socialism and Liberation” at a high school:

The posted banner is thick with irony since Facebook and the cell phone manufacturers that enabled them to take a photo and upload it to the internet are the embodiments of capitalism.

The “Party for Socialism” is promoting this book:

The history of Communism is a record of genocide,1 as D. James Kennedy and Jerry Newcombe show in their book What If Jesus Had Never Been Born?:

Mao killed about 72 million human beings from 1948 to 1976. When we add the 40 million Stalin is responsible for, we come to a number of 112 million. Throw in Hitler’s 15 million (not counting the devastating war he started!), and we come to about 127 million. Add other killings by other atheistic and totalitarian states — as a result of their atheistic ideology — you come up with a number of more than 130 million.2

Alexander Solzhenitsyn’s “estimates reach as high as sixty million” deaths just during Josef Stalin’s reign of terror.3 “Historian Robert Conquest, in The Harvest of Sorrow, his definitive account of Stalin’s reign of rural terror, estimated that 14.4 million people, half of them children, perished.”4

In addition to supporting an ideology that led to the deaths of tens of millions, today’s misinformed snowflakes hide behind the First Amendment, a right that would not have been afforded to him if they had lived in any Communist nation.

For example, gleaning in the Old Testament was a way to help the poor. Even the poorest members of society had to work (Lev. 19:9-10; 23:22; Deut. 24:20-22). There was no government agency doing the gleaning. Jesus and His disciples practiced a form of gleaning as they walked through grain fields breaking off heads of wheat to eat (Mark 2:23). Gleaning was demanding work. 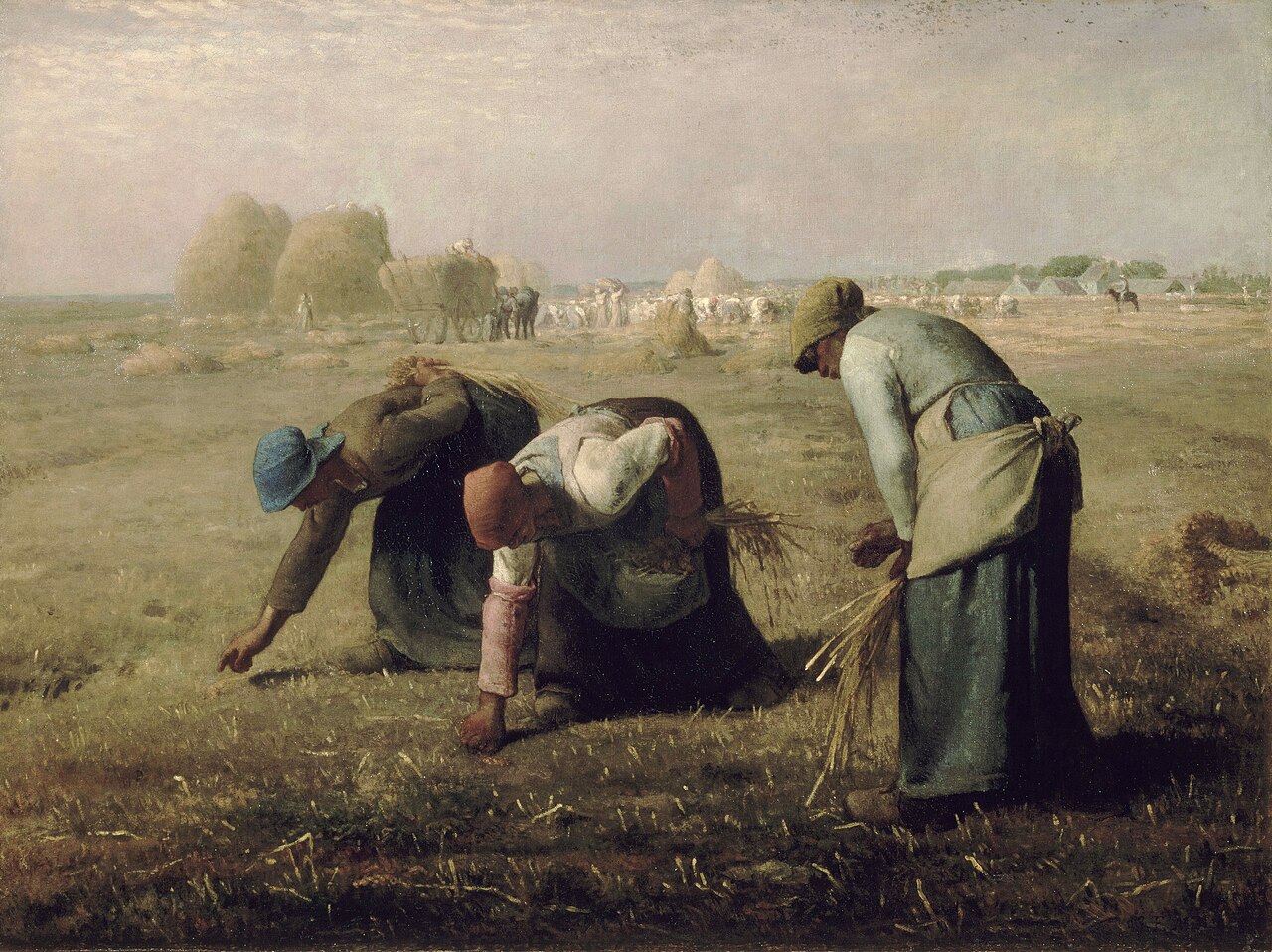 ‘The Gleaners’ by Jean-François Millet, 1857

It’s true that Jesus did say that we should care for “the least of these” (Matt. 25:40). Who are the “these”? The context makes it clear that Jesus’ scope is limited to “these brothers of Mine.” It’s difficult to fulfill this obligation when the government confiscates hundreds of billions of dollars in wealth and funnels it through a bloated impersonal bureaucracy that ends up keeping people in poverty. See Joel McDurmon’s article “Churches Worse than Infidels.”

Note that there is no mention of government programs, legislation, or mandates. The directive is aimed at individuals, not faceless and nameless bureaucrats. Rome had the power to tax (Luke 2:1; Matt. 22:15–22), and yet Jesus never petitions the Empire to force people to pay their “fair share” in the development of a welfare State. Jesus believed in limited government.

The Good Samaritan is an example of how aid should be handled. The Samaritan took care of the “half dead” man out of his own pocket. He “bandaged up his wounds, pouring oil and wine on them; and he put him on his own beast, and brought him to an inn….” And “the next day he took out two denarii and gave them to the innkeeper and said, ‘Take care of him; and whatever more you spend, when I return I will repay you’” (Luke 10:30–37). 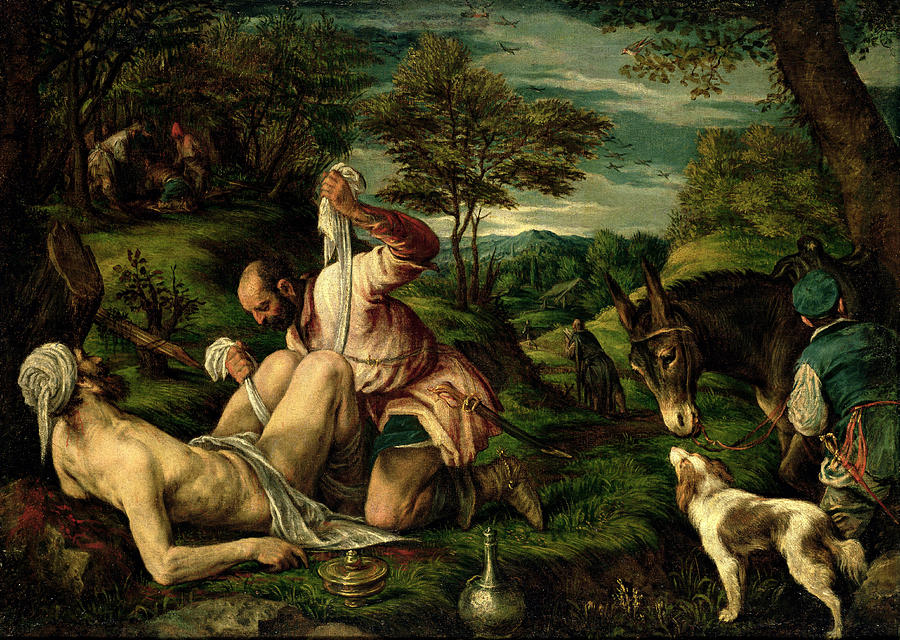 ‘The Parable of the Good Samaritan’ by Francesco Bassano (1575)

Even the story of the Rich Young Ruler is not about socialism (Mark 10:17–27). Jesus didn’t use the example of the rich man strangled by his wealth to appeal to Rome to tax rich people, so the poor will benefit. If that had been Jesus’ objective, why didn’t He say the same thing to Joseph of Arimathea who is described as a “rich man” (Matt. 27:57; Mark 15:43)? It’s possible that the rich ruler had inherited his title and fortune through fraud (Mark 10:19).

No one was forced into giving up his goods and possessions. It was not socialism legislated either by church or state. It does not resemble modern communism in any respect…. Ananais was free to keep or sell his property. When he sold it, he had the right to determine whether he would give all of it, or part of it, or none of it, into the treasury of the church for the alleviation of the needs of poor Christians. J. W. Lipscomb is certainly correct when he says, “The program was a voluntary expression of Christian concern for the needs of fellow Christians, and was not a program for compulsory collectivism such as we hear advocated all too often today.”5

The Pilgrims were initially organized as a Collectivist society as mandated by contract by their sponsoring investors. No matter how much a person worked, everybody would get the same amount. It didn’t take long for the less industrious to realize that their diminished labor would net them the same result of the most industrious.

The experience that we had in this common course and condition, tried sundry years . . . that by taking away property, and bringing community into a commonwealth, would make them happy and flourishing – as if they were wiser than God.

For this community (so far as it was) was found to breed much confusion and discontent, and retard much employment that would have been to their benefit and comfort. For young men that were most able and fit for labor and service did repine that they should spend their time and strength to work for other men’s wives and children without [being paid] that was thought injustice.“This [free enterprise] had very good success, for it made all hands industrious, so as much more corn was planted than otherwise would have been.

Not only is Socialism unbiblical and immoral; it doesn’t work.

Net neutrality: are you a Socialist and you don't know it?