Nancy Gertner, a retired federal judge and a professor at Harvard Law School, writing an opinion piece for the Boston Globe, is morally outraged that the jury in the trial of Dzhokhar Tsarnaev in the Boston Marathon bombing trial unanimously chose the death penalty instead of life imprisonment for the multi-murderer and terrorist.

Here’s some of what she wrote:

“We all chose death for Dzhokhar Tsarnaev. Make no mistake about it. The death penalty law was passed in our name. Attorney General Holder and US Attorney Carmen Ortiz are employed by the government we elected. They sought death for Tsarnaev for the victims, including the Richard family, whose tragedy they highlighted, even though the Richards were opposed to Tsarnaev’s death. The government sought it for Boston — also a victim — even though the majority of the citizens of the city opposed it. The verdict in the United States v. Tsarnaev was literally brought in our name.”

Scott Larson, a records manager who works near the finish line where the bombs went off and killed and maimed many people said he “was shocked” that Dzhokhar Tsarnaev got the death penalty. The New York Times reported, “To many, the death sentence almost feels like a blot on the city’s collective consciousness.”

The liberal media continued to express outrage that a mass murderer got the death penalty:

To the amazement of people elsewhere, Bostonians overwhelmingly opposed condemning the bomber, Dzhokhar Tsarnaev, to death. The most recent poll, conducted last month for The Boston Globe, found that just 15 percent of city residents wanted him executed. Statewide, 19 percent did.

Unfortunately, Dzhokhar Tsarnaev’s execution, if it ever happens, will be medicinal. There won’t be a hanging or firing squad. He’ll get a concoction of drugs that will end his life with mercy, something he and his dead brother did not show either before or after their terroristic murders.

This picture of Dzhokhar Tsarnaev says it all: 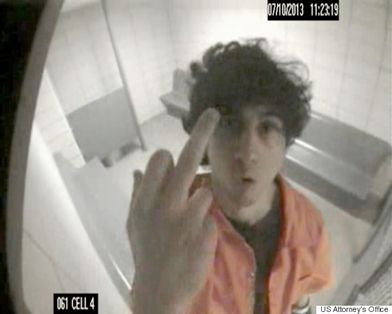 The same cities and the same newspapers – Boston Globe and New York Times – and the Senators of these states support the death penalty for innocent unborn babies. These Bostonians and New Yorkers are horrified that a mass murderer is getting the death penalty, but they have no regard for the innocent unborn babies that are killed daily in their states.

Consider Nancy Gertner who writes above in opposing the death penalty for Dzhokhar Tsarnaev but “represented abortion rights groups and the American Civil Liberties Union” when she was working as a lawyer. Here’s how she ends her anti-death penalty article:

“What a message it would have sent — in our name — if the jury or the prosecutors had chosen life — that we are not Russia, or Saudi Arabia, or China, that we don’t kill no matter how fair the trial, that our government cannot kill in our name. Not in this case. Not ever.”

But the government kills innocent victims every day in our name. It’s called abortion. You may recall that many liberals are willing to kill the unborn up to the time of birth, and some are willing to apply the death penalty after birth. Democrat Party Chairwoman Debbie Wasserman Schultz defends all abortions no matter how far an unborn baby is in development.

Read more: “How Rand Paul Turned the Tables on the Abortion Debate.”

There are even those who believe that “post-natal abortions” or “after-birth abortions” should be legal. Alberto Giubilini and Francesca Minerva, in the Journal of Medical Ethics, “claim that killing a newborn could be ethically permissible in all the circumstances where abortion would be. Such circumstances include cases where the newborn has the potential to have an (at least) acceptable life, but the well-being of the family is at risk.”