You know that it had to happen. The media made a prejudicial leap by implying, before any facts were known about the assailants, that the attack might have had something to do with Planned Parenthood.

One liberal nut ball and screw-loose liberal blamed the San Bernardino County attack on Republicans before anything was known about the assailants and their motives. Markos Moulitsas, founder of the left-wing Daily Kos, posted the following on Wednesday afternoon on Twitter:

“Yo GOP, kinda hard to talk about ‘keeping people safe’ when your peeps are shooting up America.’” 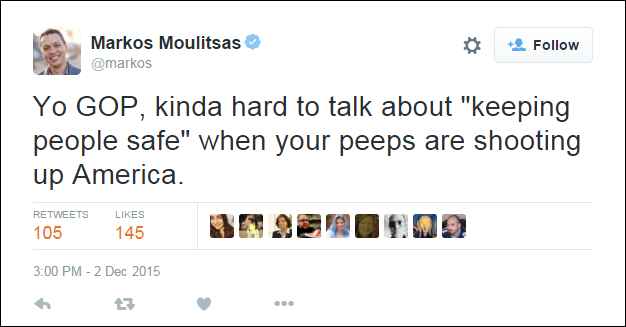 If the shooters turn out to be Muslims, three explanations will be given: First, the left will claim that it was “workplace violence” since one of the shooters is said to work at the facility where the murders took place.

After I wrote this, sure enough, it’s being given as a possible reason for the shooting. A Council on American-Islamic Relations (CAIR) “leader said the massacre may have been work related, mental illness or extreme ideology.”

It was the same spin that was put on the 2009 Nidal Hasan Fort Hood shooting. “The United States Department of Defense and federal law enforcement agencies have classified the shootings as an act of workplace violence.” Hasan “has written a letter to the head of the Islamic State, requesting to become a ‘citizen’ of the terrorist organization.”

“I formally and humbly request to be made a citizen of the Islamic State,” Hasan wrote in the letter to “Ameer, Mujahad Dr. Abu Bakr al-Baghadadi,” Fox News reported. “It would be an honor for any believer to be an obedient citizen soldier to a people and its leader who don’t compromise the religion of All-Mighty Allah to get along with the disbelievers.”

Second, the Muslims did it because of “micro-aggression” by conservatives. The GOP has said some “mean things” about Islam; therefore, how can these people be condemned for their actions?

Third, they will pull the Hillary Clinton card:

“Let’s be clear: Islam is not our adversary. Muslims are peaceful and tolerant people and have nothing whatsoever to do with terrorism.” 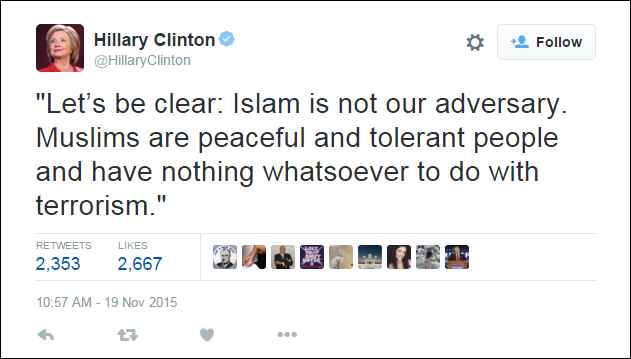 Apparently, a growing number of them do have something to do with terrorism.

The Syrian refugee debate is not about being anti-refugee; it’s about the motives of some of the refugees. There’s another issue. One of the alleged San Bernardino shooters had a good job. He seems to have been radicalized after a trip to Saudi Arabia.