Dan Barker is the Co-President of the Freedom From Religion Foundation. He’s written an article claiming that “Christians” who commit a terrorist acts should be described as “Christian terrorists.”

But are they really Christians as Dan Barker was?

He mentions Robert Lewis Dear, “the North Carolina Baptist who is accused of killing three people and wounding nine in a shooting rampage last week at a Planned Parenthood clinic in Colorado Springs.”

Next in line is Eric Rudolph,”the ‘Olympic Park Bomber’ who committed a number of anti-abortion and anti-gay-motivated bombings in the 1990s which killed two people and injured over 120 others.”

He adds to his list of “Christian terrorists” “Timothy McVeigh, the Roman Catholic who bombed the Federal Building in Oklahoma City in 1995, killing 168 people and wounding more than 600; and Anders Behring Breivik, the Norwegian Lutheran who killed eight people in 2011 with a bomb in Oslo, then shot dead 69 participants at a youth summer camp in order to protect his country from a Muslim takeover.” 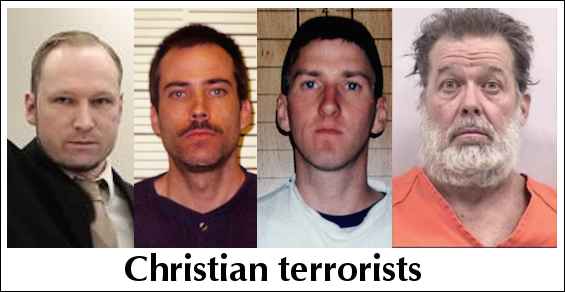 By his own definition, Mr. Barker should be described as a “Christian atheist” since Wikipedia describes him as “an American atheist activist who served as a Christian preacher and musician for 19 years but left Christianity in 1984. . . . He is the author of several books including “Losing Faith in Faith: From Preacher to Atheist.”

Should Barker be described as an atheist or a Christian? He currently self-identifies as an atheist since he no longer believes in God and preaches a different religion.

Let’s suppose that Mr. Barker decides to commit a terrorist act. How might the headline read?:

Given Mr. Barker’s logic, this would be an appropriate description. But, of course, it wouldn’t be true.

It’s not what a person is on paper that counts; it’s what they actually practice and identify with in their terrorist acts that matter.

Consider Eric Rudolf, the “Olympic Park Bomber,” second from the left in the above picture. Rudolf wrote the following in an undated letter that was published in the July 6, 2005 issue of USA Today:

Many good people continue to send me money and books. Most of them have, of course, an agenda; mostly born-again Christians looking to save my soul. I suppose the assumption is made that because I’m in here I must be a ‘sinner’ in need of salvation, and they would be glad to sell me a ticket to heaven, hawking this salvation like peanuts at a ballgame. I do appreciate their charity, but I could really do without the condescension. They have been so nice I would hate to break it to them that I really prefer Nietzsche to the Bible.”

From the July 6th issue of “USA Today”

For the uninformed, it was Nietzsche who declared, “God is dead.” Nietzsche is one of Dan Barker’s guys.

What should we make of the communist atheists who slaughtered millions?

Liberals Pray that Obama and Government Will ‘Fix This’