If you want to see a liberal become unhinged, pass a law that’s reasonable. Please explain to me why any company with employees should be forced to pay anybody anything other than what was promised in the hiring process?

When did it become a fundamental right for companies to pay for any kind of health care? The practice was voluntary when the government imposed a wage freeze. Since businesses could not lure workers with higher salaries, they offered health insurance. There were no mandates. The market and the intervention of government led to the benefit.

With ObamaCare, companies are being forced to supply healthcare. Included in that mandate is the requirement to pay for contraception that includes chemical abortifacients. “An abortifacient . . . is a substance that induces abortion.”

Contrary to the hysterics of so many pro-abortionists and liberals in general, the court did not in any way block access to contraceptives. There is no “war on women.” If women want contraceptives, they can get them, but they should be the ones to pay for them. It’s that simple.

As reported by USA Today, the 5-4 Supreme Court ruling

None of these facts matter to the anti-freedom pro-abortionists. They want their abortions, and they want you and me to pay for them, and if we don’t comply, they will go all-Taliban on us:

“The level of filth and perversion being spewed in social media in response to the SCOTUS ruling on contraception mandates is staggering. Angry, unhinged radical feminists are so upset that companies cannot be forced to bankroll their $5 a week contraception pills they’re actually calling for public sex acts to occur inside of Hobby Lobby stores.

“Well, at least one influential feminist is anyway. And worse, this one is a columnist for a major media outlet.

“Her name is Jessica Valenti and her radical columns can be seen here. If you want to see a collection of some of the foulest tweets out there, just look at her Twitter feed here.

It gets even worse. Some of these deranged haters want Hobby Lobby stores to burn to the ground. They would rather see millions of dollars in property loss, thousands of people unemployed, just so they can get some pills that cause abortions at someone else’s expense. 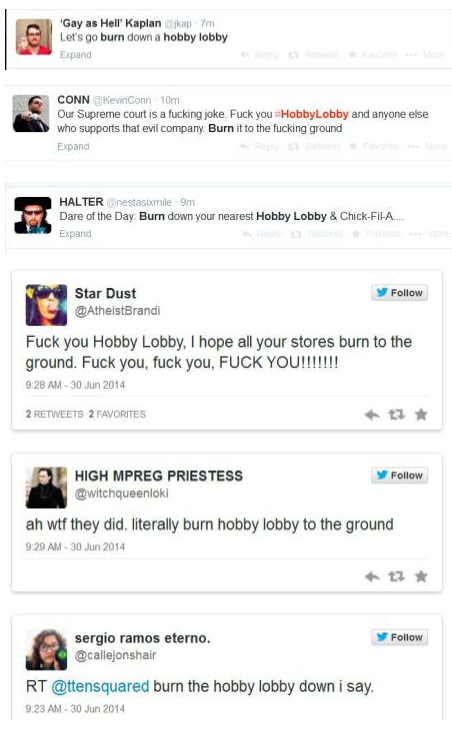 Keep these comments in mind the next time some liberal accuses conservatives of waging a war on women. Remind them of the type of people who support them. Print out these Twitter comments, stick them in your wallet, and pull them out the next time some Lefist accuses you of being intolerant.

What to Do with Kidnappers and Child Abductors

Keep Your Ovaries Out of My Wallet