Let’s Stop the Impeachment Talk and Build on Our Success

Since the blowout in yesterday’s election, there are some conservatives who want the Republicans to go for the throat and impeach President Obama. I believe such an attempt would be a disaster.

Everything that was just won would turn to dust. The media and the Democrats would love to take attention away from the repudiation of President Obama and Democrat policies.

The American people are finally catching on that President Obama and his policies have been a disaster. His approval rating is below 40 percent which is still too high, but it continues to trend downward. His political surrogates just got stomped on big time.

Even some in the media are turning against him, although not enough to make broader national headlines and front page news. It remains to be seen how they will spin this massive defeat. Obama is already blame shifting, blaming the defeat on unfriendly states. Unfriendly is right:

“Mr. Obama, calling in to a Hartford radio show on Tuesday as voters across the country were casting their ballots, had the distinct sound of a man preparing to rationalize a major defeat. His party started with a historic disadvantage, the president argued in the interview with WNPR, noting that many of the Senate seats up for grab this year are in states unfriendly to Democrats.

“‘This is probably the worst possible group of states for Democrats since Dwight Eisenhower,’ Mr. Obama said, conceding aloud a reality that his closest advisers have long noted in private.”

We want this man in office. They more he speaks, the better he sounds . . . for us.

Democrats in Red states didn’t want to be seen with Obama. How many Democrats ran on Obama’s accomplishments? None, because they knew they couldn’t. All they had was the War on Women meme that just bit the dust with the election of two female GOP Senators.

Impeachment proceedings would take a long time, energize the Democrat base that is now demoralized, and draw attention away from the border disaster, the IRS scandal, the floundering economy, international weakness, and Obama’s overall incompetency (or competency as someone who wants to change America from the inside and is doing a very good job in accomplishing his goal), and so much more.

Obama would love it. 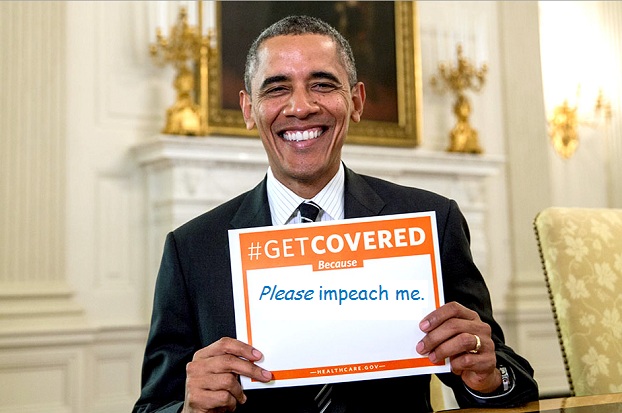 Why would we want to do this?

With 2016 just around the corner, the Democrats are in a tight political spot. They’ve used up all their ammunition. Even Blacks are beginning to rethink their political allegiance to the Democrat Party.

Some people claim it’s the principle that matters even if the attempt fails. There are other ways to win on principle that have a better chance of success and will have a long-term effect. This election proves it.

The media would shift attention away from the scandals that they are finally reporting on and concentrate on how the GOP is obstructionist and racist.

So let’s drop any talk of impeachment and keep our eye on the ball.

Impeachment doesn’t get us anywhere. Breathing new life into the Republican Party as a result of this election is a breath of fresh air. We stopped Democrat Michelle Nunn from winning a Senate seat in Georgia. Republicans may have picked up 10 Senate seats. Harry Reid is out of power. The GOP broadened its lead in the House.

That’s a good day in anybody’s book. Let’s build on it.

The Denials Keep Rolling In and Obama Does Not Feel Repudiated

Let’s Stop the Impeachment Talk and Build on Our Success