The two multi-millionaires must assume that socialism means to be social and has nothing to do with stealing money from people.

The full implications of a socialistic worldview cannot be ascertained in a country dominated to some extent by capitalism. Socialists need capitalism since socialists do not create prosperity. They only feed off of the prosperous. They are thieves.

No one is forcing anyone to purchase an Apple product or shop on Amazon. Neither of these companies is taking money from us and giving it to other people. If you don’t like these companies, you aren’t forced to support them. This is not true of socialism or its next of kin, Communism.

You can buy stock in these companies as millions of people have done. That, too, is voluntary. The stock that’s valued at a trillion dollars is spread out over millions of investors. Yes, Jeff Bezos is a billionaire, but he didn’t get that way by taking money from you or me.

Socialists are like termites. By the time you recognize that termites have invaded your house, it’s often too late. Termites leave the form of the piece of wood they consume by only chewing out the heart.

Socialism steadily extracts the nourishment from a society by continually eating away its host.

Rulers gain and maintain popular support through the demagogic tactic of taxing and spending. In short, by promising the voting public a share of the state’s largess, the rulers are able to “purchase” the votes they need to stay in power. Because a significant number of people receive benefits larger than their “contributions,” that is, larger than what they pay in taxes, they continue to keep a ruling elite in power.

Even so, we’re being told that “the majority of millennials would prefer to live in a socialist, communist or fascist nation rather than a capitalistic one, according to a new poll…. The most popular socioeconomic order was socialism, with 44 percent support. Communism and fascism received 7 percent support each.” (Washington Times). Were socialism, communism, and fascism defined and their history described? I suspect they weren’t. For many millennials, socialism probably means “to be social”; it’s related to “social media.” Communism is about being in a community. Remember, Barack Obama was a “community organizer.” Community sounds a lot like Communism.

Communism and socialism are all about “sharing.”

You may have seen this Facebook post from a “Club for Socialism and Liberation” at a high school: 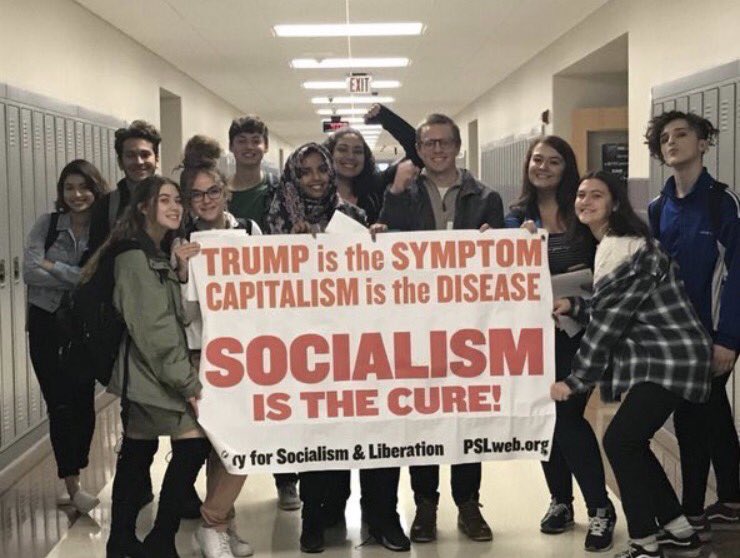 The posted banner is thick with irony since Facebook and the cell phone manufacturers that enabled them to take a photo and upload it to the internet are the embodiments of capitalism.

The “Party for Socialism” has turned Fidel Castro into a political saint, and yet not one of these socialist advocates could stand to live in Socialist Cuba for more than a month:

For example, gleaning in the Old Testament was a way to help the poor. Even the poorest members of society had to work (Lev. 19:9-10; 23:22; Deut. 24:20-22). There was no government agency doing the gleaning for them. Jesus and His disciples practiced a form of gleaning as they walked through grain fields breaking off heads of wheat to eat (Mark 2:23). Gleaning was demanding work. The New Testament is rigorous in its denouncement of socialism with its command that a person who is able to work and does not work should not eat (2 Thess. 3:10).

It’s true that Jesus did say that we should care for “the least of these” (Matt. 25:40). Who are the “these”? The context makes it clear that Jesus’ scope is limited to “these brothers of Mine.” It’s difficult to fulfill this obligation when the government confiscates hundreds of billions of dollars in wealth and funnels it through a bloated impersonal bureaucracy that ends up keeping people in poverty. See Joel McDurmon’s article “Churches Worse than Infidels.”

Note that there is no mention of government programs, legislation, or mandates in the Bible. The directive to help is aimed at individuals, not faceless and nameless bureaucrats. Rome had the power to tax (Luke 2:1; Matt. 22:15–22), and yet Jesus never petitions the Empire to force people to pay their “fair share” in the development of a welfare State. Jesus believed in limited government.

The Good Samaritan took care of the “half dead” man out of his own pocket. The Samaritan “bandaged up his wounds, pouring oil and wine on them; and he put him on his own beast, and brought him to an inn….” And “the next day he took out two denarii and gave them to the innkeeper and said, ‘Take care of him; and whatever more you spend, when I return I will repay you’” (Luke 10:30–37).

Even the story of the Rich Young Ruler is not about socialism (Mark 10:17–27). Jesus didn’t use the example of the rich man strangled by his wealth to appeal to Rome to tax rich people, so the poor will benefit. If that had been Jesus’ objective, why didn’t He say the same thing to Joseph of Arimathea who is described as a “rich man” (Matt. 27:57; Mark 15:43)? It’s possible that the rich ruler had inherited his title and fortune through fraud (Mark 10:19).

No one was forced into giving up his goods and possessions. It was not socialism legislated either by church or state. It does not resemble modern communism in any respect…. Ananais was free to keep or sell his property. When he sold it, he had the right to determine whether he would give all of it, or part of it, or none of it, into the treasury of the church for the alleviation of the needs of poor Christians. J. W. Lipscomb is certainly correct when he says, “The program was a voluntary expression of Christian concern for the needs of fellow Christians, and was not a program for compulsory collectivism such as we hear advocated all too often today.”1

The history of socialist economic failure is easy to find.

The Pilgrims were initially organized as a Collectivist society as mandated by contract by their sponsoring investors. No matter how much a person worked, everybody would get the same amount. It didn’t take long for the less industrious to realize that their diminished labor would net them the same result of the most industrious.

“The experience that we had in this common course and condition, tried sundry years . . . that by taking away property, and bringing community into a common wealth, would make them happy and flourishing – as if they were wiser than God.”

Not only is Socialism unbiblical and immoral; it doesn’t work.