If Bill Mefford can ridicule the more than 200,000 people who marched against abortion in Washington, DC, by posting a picture of himself standing before them with a sign saying “I MARCH FOR SANDWHICHES,” then I can accuse him and his denomination of supporting the murder of unborn babies (see below).

He and his denomination need to be called out for it. Imagine if he had done something similar during a civil rights march or in a protest against Nazi atrocities.

Mr. Mefford can’t be honest in his support for abortion by telling it like it is, so he attempts to trivialize the act of abortion and those who oppose it with an act of ridicule, equating sandwiches to the unborn. 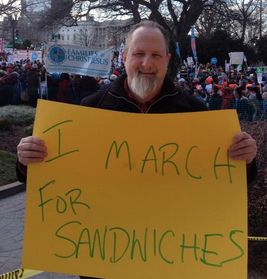 Mefford is the supposed ‘Human Rights Director’ for the United Methodist Church which sold its soul to the devil a long time ago. The UMC is selective in determining who is deserving of human rights:

“Why isn’t Mefford marching for the unborn if he stands for human rights? If he doesn’t think those rights extend to all humans, why doesn’t he request a change in his job title? Something like ‘Director of Civil and of Select Human Rights’ is concise and has a satisfying ring of exclusivity. It would almost sound like a promotion.

Once the picture of Mefford holding his juvenile sign at a solemn march for the more than 50 million unborn babies that have been aborted since 1973 made the rounds on the internet, he apologized . . . for the sign, not for supporting the killing of unborn babies.

Does this look lie a sandwich?

When asked why abortion is not a “violation of human rights,” Mefford’s answer was that he has adopted and been involved in foster care, a neat way to evade the question and having to give a direct answer.

That’s like a Nazi saying that some of his best friends are Jews while turning a blind eye to other Jews being marched off to the gas chambers.

Dr. Susan Henry-Crowe, general secretary general on the Board of Church & Society, issued a statement about Mefford’s public mocking of those who marched for the unborn:

“Affirming human dignity is central to the witness of Jesus Christ. Christians are called to watch over with care the lives of all persons and creation. We must strive to lead by example through our words and actions. We seek Christian compassion when we fall short in our actions with one another.

“A recent action involving a staff member of GBCS did not reflect our culture of respect, openness and hospitality. Appropriate conversations and action have been taken. We at GBCS recognize the special responsibility we have to cultivate respect, trust and hospitality among those who hold a variety of opinions on social issues.”

“Affirming human dignity” only goes so far, and it doesn’t include affirming the human dignity of the unborn. Her statement drips with hypocrisy: “Christians are called to watch over with care the lives of all persons and creation.” Like Mefford, Dr. Henry-Crowe is parsing her words carefully so as not to divulge too much. she doesn’t want the low-information parishioners in the pews to know where their money is going.

The only thing Dr. Susan Henry-Crowe is upset about is the bad publicity that Bill Mefford brought to the denomination and the Board of Church & Society. “Her statement neglects to note that they give money to and support the [Religious Coalition for Reproductive Choice] RCRC, which vocally and blatantly advocates for abortion right[s] and Roe v. Wade being upheld.”

I suspect that Dr. Henry-Crowe is more upset with the way the sign looks than with its message.