The Best Picture at the 2018 Academy Awards is The Shape of Water. It’s a love story between a female custodian at a high-security government laboratory who falls in love with a captured humanoid-amphibian creature.

The “romance” was one-sided, unlike that of The Shape of Water. 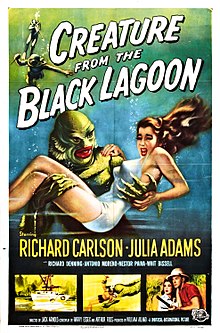 Hollywood has been normalizing sexual relationships of all kinds for decades. It seems that every film in the past few years has a sympathetic same-sex character. The Shape of Water does. “Let’s add a gay guy so the LBGTQ+ crowd is placated.” Soon, it will be transgenders written into film plots even though there’s no reason to do so in an attempt to normalize the abnormal.

Guess who the moral antagonist is in the film? A man who is “a stereotypical caricature of Christianity.” (see Brian Godawa’s excellent review: “Oscar Win: The Shape of Water Reveals the Soul of Hollywood — Bestiality.”)

Where will it stop? It won’t. As Jimmy Kimmel said during the Academy Awards,

“We don’t make films like ‘Call Me By Your Name’ to make money. We make them to upset Mike Pence.”

And what’s Call Me By Your Name about? It’s a man-boy homosexual “love story.” The folks at NAMBLA would be proud of how the film is normalizing man-boy sexual relationships. The normalization of perverted and immoral sexual relationships is being taught in many of our nation’s government schools and reinforced in popular culture.

With a national Department of Education, don’t think your government school will be exempt, especially if the Democrats get back in power.

USA Today reports that “Facebook is under fire for asking users whether pedophiles should be able to proposition underage girls for sexually explicit photographs on the giant social network.” Let that sink in.

Corey Feldman had this to say about the homosexual grooming film that was nominated for an Academy Award for Best Picture:

Teenage boys are getting a perverted view of sex, romance, and marriage. For many young people, sex is love, and there are no moral boundaries as to what ‘s appropriate regarding sexual relationships. Former Pres. Bill Clinton did a lot to normalize the idea that as long as sexual intercourse does not take place, it’s not sex.

To describe any sexual relationship as immoral is akin to a hate crime.

What inspired me to write this article was the 1955 Academy Award-winning film Marty that starred Ernest Borgnine. I came across the film as I was scanning channels the day after the Academy Awards.

Marty Piletti (Ernest Borgnine) is 34 years old, unmarried, and lives at home with his widowed mother. By his own admission, he is not an attractive man. He resigns himself to living out his life as a bachelor. His mother encourages him to go to a dance. At first, he resists. He’s had his heart broken many times. He does not want it to happen again. To make his mother happy, he relents. While there, he meets a woman who, like Marty, has had similar heart-breaking experiences. They hit it off, talking the night away. His friends and mother, now afraid that Marty will get married and leave her alone, try to dissuade him from getting involved.

At first, Marty succumbs to the pressure. But after a night of hanging out with his single friends has a breakthrough:

That night, back in the same lonely rut, Marty realizes that he is giving up a woman whom he not only likes but who makes him happy. Over the objections of his friends, he dashes to a phone booth to call Clara, who is disconsolately watching television with her parents. When his friend asks what he’s doing, Marty bursts out saying:

Marty closes the phone booth’s door when Clara answers the phone. In the last line of the film, he tentatively says, ‘Hello… Hello, Clara?'”

I might be a sentimentalist, but most relationships are more like what Marty and Clara went through. They are much more realistic than a woman and an amphibian getting it on in a government lab, bathroom, and a canal. Obviously.

Liberals will try to claim that The Shape of Water is a “metaphor.” It’s a metaphor alright. If a woman and an amphibian can find love, so can two men and two women and any number of gender-confused people to the point of lopping off their genitals.

You want to bring sanity back to romance, watch Marty with your children. I know, they’ll complain that it’s not in color and has no special effects. Actually, it’s filled with special effects, the ones that count.