While doing some research for a previous article, I came across an article published by American Forces Press Service and posted on the U.S. Department of Defense website. I was shocked when I read it, especially since the VA scandal erupted.

The medical facility in Guantanamo is said to be “state-of-the-art.” Capt. Barry Barendse, a Navy nurse and the deputy command surgeon for JTF Guantanamo, said, “The standard of care here is the best possible standard of care (the detainees) could get.”

I’m all for helping anybody who has a medical condition. But it seems to me that our nation’s soldiers should be the ones receiving “as good as or better than” enemy combatants.

NAVAL STATION GUANTANAMO BAY, Cuba, Feb. 18, 2005 – In every case, enemy combatants held  here receive medical care that is “as good as or better than anything we would offer our own soldiers, sailors, airmen or Marines,” the general in charge of the U.S. detention facility here said Army Brig Gen. Jay Hood, commander of Joint task Force Guantanamo, said medical personnel at the detainee hospital here have helped detainees recover from “some very significant war wounds.”

Active-duty U.S. Navy medical personnel care for detainees as both inpatients and outpatients from a dedicated facility at Camp Delta, the main detainee- holding facility here. Most routine medical care is administered by corpsmen who visit each cellblock every two days or whenever a detainee requests care.

More serious health concerns among detainees are treated at the small, state- of-the-art medical facility dedicated to their care. A senior administrator at the facility called it “equivalent to a community acute-care hospital.”

The facility is equipped with 19 inpatient beds (and can expand to 28), a physical-therapy area, pharmacy, radiology department, central sterilization area, and a single-bed operating room. More complex surgeries can be performed at the base naval hospital, which also is equipped with an intensive-care wing. 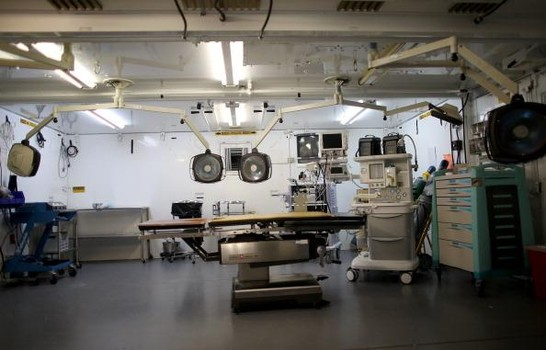 The detainee hospital also features an isolation room to prevent infectious diseases from spreading. So far, however, this room has only been used when ruling out diseases. For instance, an official explained, one detainee stayed in the isolation room when doctors thought he might have an active case of tuberculosis. The detainee was removed from the room when cell cultures disproved that preliminary diagnosis. To date, no detainees at Guantanamo Bay have been diagnosed with active tuberculosis or other infectious diseases, the official said.

As in every other part of Camp Delta, security is a constant concern. A dedicated force of Army military police officers is assigned to guard detainees receiving treatment in the hospital.

The Navy medical personnel who treat the detainees pride themselves on the quality of care they provide, said Capt. Barry Barendse, a Navy nurse and the deputy command surgeon for JTF Guantanamo. “The standard of care here is the best possible standard of care (the detainees) could get,” he said.

“It’s not that we like hanging around the bad guys,” he said. “The thing about it is that the job we do for a living is a very humane one, and we just keep that mindset.”

And the detainees’ actions or attitudes do nothing to deter the staff from their dedication to providing high-quality care. The captain explained that detainees have told staff members “they would kill them if they had the chance and go after the rest of their family if they could.” And still, the standard of care never wavers, he said.

Why John Kerry’s 'Flat Earth Society' Slam is All Wrong