Nearly everybody is up in arms over the VA scandal. As usual, President Obama voiced his outrage and moved on. To show that he cares, he visited the troops in Afghanistan. He’s had six years to fix what he claimed in 2008 needed to be fixed. The fact that “he cares” is all that low-information voters need to know. It’s all about feelings.

A remedy to the VA debacle has been proposed:

“Sen. John McCain, R-Ariz., turned up the heat on the administration over the Veterans Affairs health-care scandal on Saturday, writing in an op-ed that President Obama was ‘nowhere to be seen’ as accusations of misconduct at VA hospitals mounted in recent months.

“He also pitched a bill that would allow veterans to seek care at private facilities outside the VA system — an idea that’s picked up support from some unlikely quarters as the taint of scandal continues to swirl around the embattled agency.”

This is old news. As I’ll show below, this is the way the VA used to work. It makes sense.

I know the VA very well. My father served in World War II. He was at Pearl Harbor when Japan attacked on December 7, 1941. He served in the Pacific: Guadalcanal, Northern Solomons, and Philippine Liberation Campaigns. He re-enlisted when the Korean War broke out.

When my father died in May of 2001, I saw for the first time the letter the Army had sent my mother informing her that my father had suffered a near-fatal injury. A mortar shell had exploded next to the jeep he was riding in. It happened on February 28, 1951. (I was born in April of 1950). My father’s foot was resting on the running board. It was the last time it would rest anywhere again. After the explosion, all that remained was a bloody stump.

It took a long time before my father could lead a semi-normal life again. Walter Reed Hospital was his home for more than a year. Prosthetics were different back then. My father’s artificial leg was heavy and cumbersome.

The VA hospitals treated him well for 50 years. He had nothing but good things to say about the VA.

Yesterday I was going through some of my mother’s files, and found a memorandum from Lt. Col. James D. Boole, Jr. from the Walter Reed Army Medical Center.

“3. If at any time while on Detached Service you are in need of medical attention, you may obtain such treatment at any Army, Navy or Air Force Hospital. If these are not available, it may be obtained from a hospital of other Federal Agencies, such as Veterans Hospital[s] and US Public Health. If none of these are available, it may be obtained from Civilian hospitals. Notify the Registrar of this hospital immediately upon receipt of any treatments. If you are admitted to any hospital notify this office immediately by wire or telephone.” 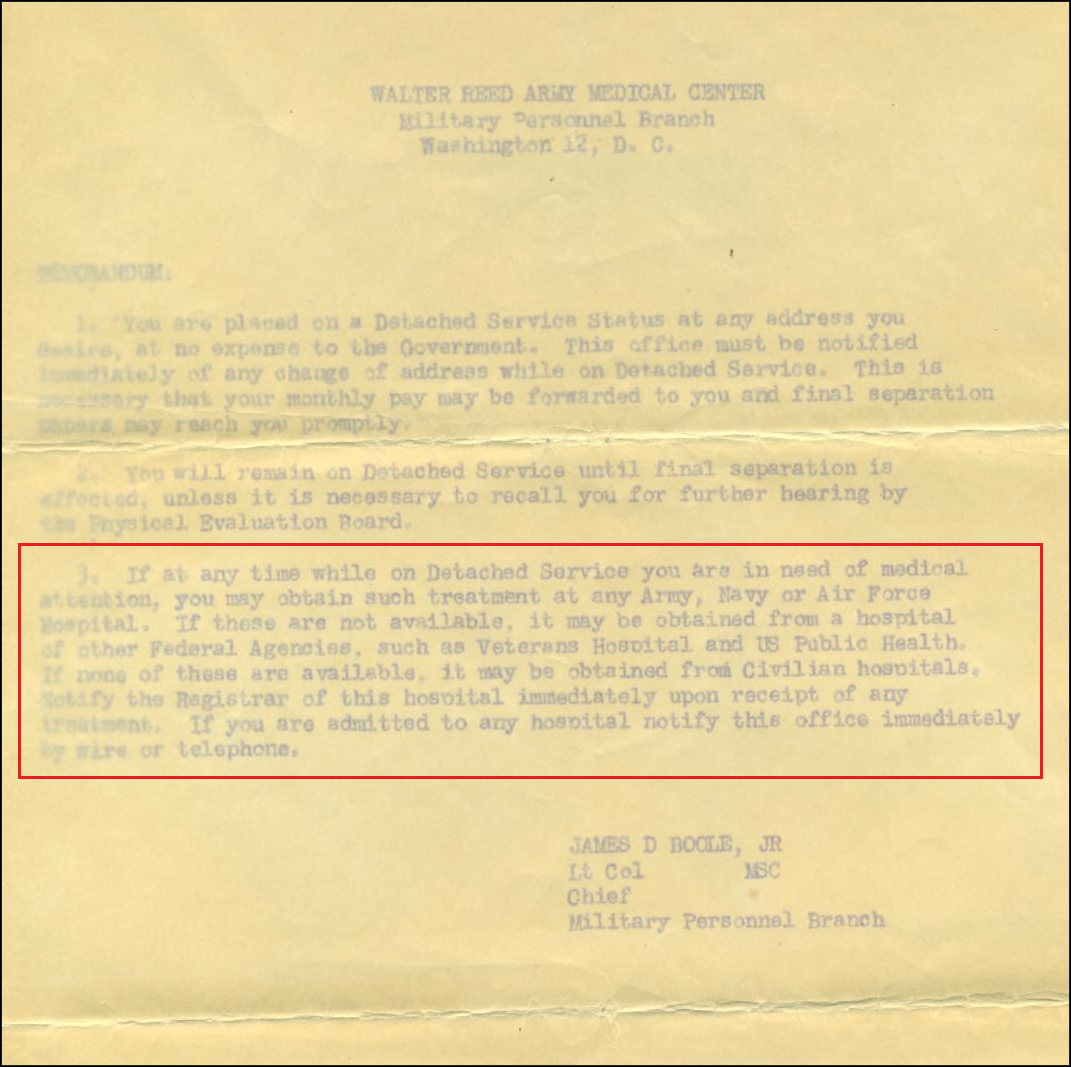 When did this all change?

The last thing we need is a system where only the government’s choice for us is our only option. Oh, wait, that’s what we have at this moment under Obamacare. What makes McCain et al. think the veterans will get better care when the care your you and me is going down hill?