Because of the Supreme Court decision legalizing same-sex marriage, some states are scrambling to come up with some remedial legal remedies. It’s happening in Georgia, but Republican Gov. Nathan Deal is opposing any legal protections and is trying to use the Bible to make his case. In reality, it’s money over morality and common sense.

Alabama used its Ninth and Tenth Amendment constitutional rights and dismissed the court’s ruling as unconstitutional.

Alabama Chief Justice Roy Moore said, “the Supreme Court’s marriage ruling is completely without constitutional authority, a usurpation of state sovereignty, and an effort to impose the will of ‘five lawyers,’ as Chief Justice Roberts stated … on the people of this country.” Moore went on to say that the ruling was “‘tyrannical’ because the creation of same-sex marriage will be ‘used to vilify Americans who are unwilling to assent to the new orthodoxy.’” (H/T: WND)

Even before five members of the Supreme Court issued their unprecedented ruling, a number of Americans have been vilified for taking a stand against same-sex sexuality and same-sex marriages. Some have been fined severely.

States that have tried to take legal steps to protect businesses from being forced to participate in same-sex weddings are being pressured by the Chamber of Commerce to remove all religious freedom protections for those opposed to same-sex marriage because they are said to be “discriminatory.” Since when has it been considered “discriminatory” to oppose a certain type of sex people engage it? Ministers discriminate all the time. They don’t marry just anyone who walks into their church. There are plenty of fools out there who will marry anyone to anyone or anything, just don’t force me to support these faux marriages.

Georgia has tried to offer protections for people who do not believe homosexual marriage should be sanctioned by the state. “The Georgia House unanimously passed HB 757, the Pastor Protection Act, February 11, affording conscience protection for clergy declining to perform ‘wedding’ ceremonies for homosexual couples.”

In addition to HB 757, S.B. 284, the First Amendment Defense Act of Georgia, was added to expand the legislation to ‘prohibit discriminatory action against a person who believes, speaks, or acts in accordance with a sincerely held religious belief or moral conviction that marriage is or should be recognized as the union of one man and one woman or that sexual relations are properly reserved to such marriage.” (H/T: LifeSite News)

In reality, none of these bills should be necessary since the First Amendment already affords the necessary constitutional protections. Furthermore, even without the First Amendment, liberty of conscience precedes any man-made protections that can be changed by five unelected lawyers, even if they do wear black robes and sit as a Supreme Court. No one (religious or not) should be forced to act against his or her belief system (religious or not).

But in this day of high-financed pressure groups and rogue judges additional legal protections are needed.

This brings me to Georgia Gov. Nathan Deal who “has come out strongly against proposed legislation protecting clergy and others from being forced to participate in or condone so-called homosexual ‘marriages.’”

Gov. Deal made his argument against the legislation by appealing to the Bible. Here’s some of what he said:

“What the New Testament teaches us is that Jesus reached out to those who were considered the outcasts, the ones that did not conform to the religious societies’ view of the world. We do not have a belief in my way of looking at religion that says we have to discriminate against anybody. If you were to apply those standards to the teaching of Jesus, I don’t think they fit.”

When Jesus met the woman of Samaria, she was an outcast. She was involved in sexual sin. Jesus tells her, “call your husband.” She responds with, “I have no husband.” Jesus said to her, “You have correctly said, ‘I have no husband’; for you have had five husbands, and the one whom you now have is not your husband. . .” (John 4:16-18).

Is Gov. Deal saying that Jesus would have supported a law that would have denied a rabbi the right to “discriminate” by not marrying the woman and her next husband and a baker who did not want to bake a cake for the wedding? Would Jesus have gone to the wedding and made some good wine for them? I don’t think so.

The woman caught in adultery was an outcast. While Jesus condemned the condemners who most likely set her up in order to test Jesus’ moral convictions (where was the man if she had been caught in the act?), He told the woman to “sin no more” (John 8:11). Once again, yes, Jesus did reach out to an outcast, but He did not condone the behavior of the outcast. 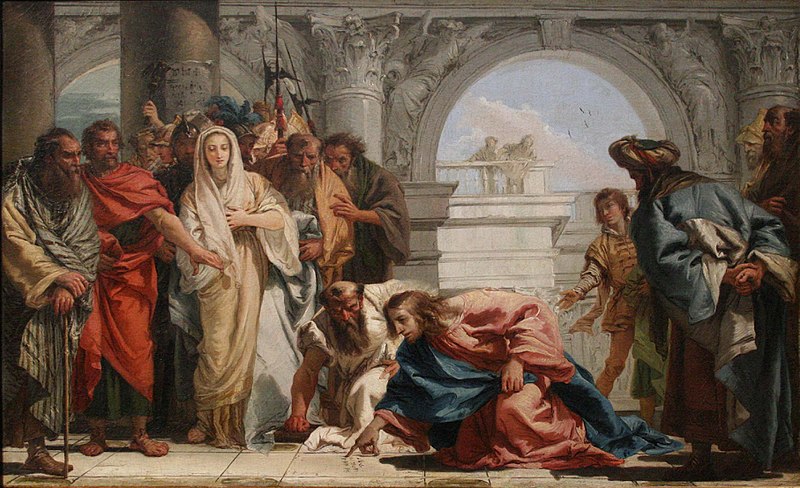 “I hope that we can all just take a deep breath, recognize that the world is changing around us, and recognize that it is important that we protect fundamental religious beliefs. But we don’t have to discriminate against other people in order to do that. And that’s the compromise that I’m looking for.”

The reason the world is changing around us is that people like Gov. Deal won’t stand strong to stop some of the changes. The apostle Paul stood strong and called for discrimination based on a person’s sexual behavior:

“For they exchanged the truth of God for a lie, and worshiped and served the creature rather than the Creator, who is blessed forever. Amen. For this reason God gave them over to degrading passions; for their women exchanged the natural function for that which is unnatural, and in the same way also the men abandoned the natural function of the woman and burned in their desire toward one another, men with men committing indecent acts and receiving in their own persons the due penalty of their error” (Rom. 1:25-27; 1 Cor. 6:9-11; 1 Tim. 1:8-11).

The world changed when the Apostle Paul condemned same-sex sexuality in the heart of the pagan pro-homosexual Roman Empire. If we follow Gov. Deal’s reasoning, we will be returning to paganism.

Soft-Selling Communism and Stalinism in the 'Trumbo' film