George Takei, best known for his role as the original USS Enterprise helmsman Hikaru Sulu on Star Trek, is a homosexual and a defender of all things homosexual and “transgenderish.” I think he’s a wacko, and I’m not alone. Takei and Kirk’s William Shatner have been feuding for years:

“In 2008 [Shatner] branded George ‘sick’ and ‘psychotic’ and claimed he feels ‘nothing but pity for him,’ as he responded to numerous attacks and snubs. In an astonishing internet video clip, he also said nobody cared when the gay actor finally came out in 2005.”

Takei had some very disturbing things to say about sex with children:

“In a 2006 interview, Star Trek actor, Pizza Hut promoter, and liberal Twitter pundit George Takei spoke positively of being molested by an older man during his adolescence. . . . On the Howard Stern Show, Takei shared details of his first sexual experience with the host and co-host Robin Quivers, who gleefully enjoyed his retelling of how he, as a 13-year-old boy, was molested by an ’18- or 19′-year-old counselor at summer camp at Lake Arrowhead in Los Angeles.

“Takei, who said he lost his virginity to the older man, talked about how he found the counselor sexually attractive in retrospect and described him as ‘experienced.’ He said it was the first time he’d ever done anything sexual and did not know he was gay at the time.”(Heat Street)

But none of the anti-Christian and pro-homosexual rantings of Takei have stopped Pizza Hut from using him to promote their products. Keep that in mind when you crave pizza or tacos.

Read more: “IF PEOPLE ARE CONVINCED ‘TRANSGENDERISM’ IS REAL, THEN THEY CAN BE CONVINCED OF ANYTHING.”

Takei’s latest absurdity is comparing prohibiting so-called transgenders from using the bathrooms of their “chosen gender” to forcing blacks to use specified water fountains. (Huffington Post) 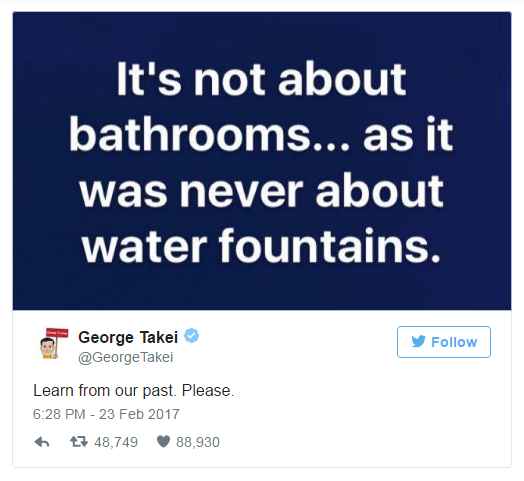 Takei is referring to laws passed in the South that forced Blacks to use “Colored Only” water fountains. Here’s the problem with the analogy. Blacks could not change their race by declaring something like the following:

“I’m no longer ‘colored.’ I’m now white. I’ve decided that today I’m a white person. Don’t look at the color of my skin. I’m really white because I choose to be. That’s why it’s OK to use the ‘whites only’ fountains.”

Does anyone believe such a charade would have worked?

Today, however, we’re all supposed to believe that a woman can declare herself to be a man and a man a woman and presto changeo it’s a reality!

Takei is of Japanese descent. He and his family were placed in an internment camp by the Democrat President Franklin D. Roosevelt. Why didn’t the Japanese people living in the United States at the time declare themselves to be British or French or Dutch or Swedish? If people can declare themselves to be any one of 50 or more gender identities, why couldn’t the Japanese have done the same?

Read more: “THERE ARE NO HOMOSEXUALS OR TRANSGENDERS.”

There are just some things that you cannot declare yourself to be without some form of objective evidence. Remember Rachel Dolezal who self-identified as Black even though she is of German, Dutch, Swedish and Czech origin? In 2015, Dolezal came to media attention when her Caucasian parents stated publicly that Dolezal is a white woman passing herself off as black.

“Her argument was that racial heredity did not constitute identity. Identity was a subjective, fluid thing: ‘From my truth,’ and ‘in this moment,’ ‘nothing about being white describes who I am.’” (The Economist)

She colored her skin, dyed and frizzed her hair, and spoke in a way that gave the impression that she was black.

As long as she kept the delusion to herself, no one cared. But when she pursued jobs based on her racial claims, everything came crashing down. Blacks were quick to make the case that race is not fluid. No Black person could claim to be white and get away with the obvious farce.

Was life discovered on new planets or More Money to Spend on NASA?

Red Lights in Tinseltown Over the Oscars Weekend