Takei and Kirk’s William Shatner have been feuding for years:

“In 2008 [Shatner] branded George ‘sick’ and ‘psychotic’ and claimed he feels ‘nothing but pity for him,’ as he responded to numerous attacks and snubs.

In an astonishing internet video clip, he also said nobody cared when the gay actor finally came out in 2005.”

Takei has taken on a more major role today. He’s an outspoken activist for homosexual rights. He petitioned the International Olympic Committee (IOC) to move the 2014 Winter Olympics because of Russia’s anti-homosexual policies and laws.

On his blog, Takei wrote the following:

“Given this position, the IOC must do the right thing, protect its athletes and the fans, and move the 2014 Winter Olympics out of Russia . . . Would this be their opinion if the law instead called for the arrest of any Jews, Roman Catholics or Muslims should they display any sign of their religion, such as a wearing a yarmulke or praying while facing Mecca? Discrimination in any form is a blight upon the Winter Games, and it must not be tolerated.”

Hey George, homosexuality is a behavior, not a religion, a racial distinction, or a piece of clothing.

Takei is at it again, weighing in on the Hobby Lobby case. The following is from PJ Media:

Clueless Democrats — sorry for the redundancy there — are passing this meme around on social media and saying how great and insightful it is. 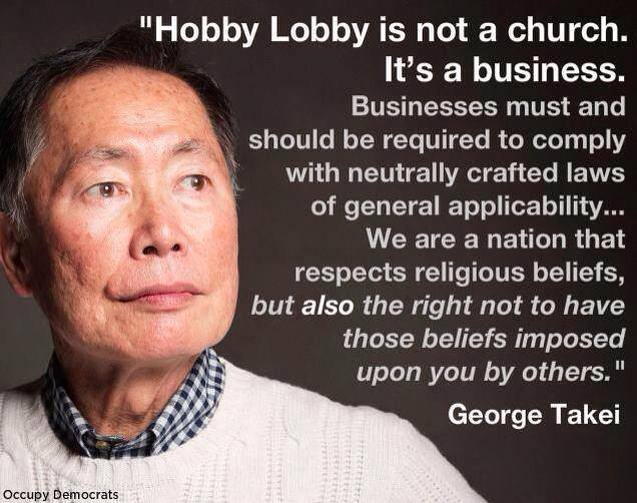 Just because a guy who pushed buttons and encountered unconvincing aliens on a 1960s TV show says something, doesn’t make it true.

Hobby Lobby doesn’t have to be a church for its owners to have religious and private property rights. Corporations are made up of humans who form a legal entity for a purpose, in this case, to sell picture frames and nick-nacks. The owners of this particular corporation are a family. They have rights. They do not surrender those rights because they formed a business. Anyone who thinks that they did surrender those rights when they formed their family business is a moron.

The Greens — they own Hobby Lobby — were literally minding their own business when the Obama administration slammed them with a mandate forcing them to use their property to pay for something that violates their religious beliefs. The Greens acted on their beliefs and took the mandate to court. They won. That’s how it works in this country.

The scary part is that we were one Anthony Kennedy away from losing serious ground in both the private property and religious freedom spheres. Even scarier — people like George Takei spout off without having the first clue what they’re even talking about. And others just think he’s a genius.

The Obamacare mandate in question here is not a “neutrally crafted law.” It’s a regulation that the Department of Health and Human Services attached to a law that is itself of dubious legitimacy. The Obama administration could unwrite that regulation at any time. It could amend it. It has chosen not to, and chose to take the Greens all the way to the Supreme Court to defend it. The Obama administration [is] the aggressor in this fight. The Greens’ case is entirely defensive.