Burger King has gone Gay. They’ve come out with a Gay Whopper with the slogan “Introducing the Proud Whopper.” The Whopper is the same old Whopper; it’s the wrapper that makes the difference.

The slogan reads like a sexual innuendo. Homosexuals will love that. The following is from USA Today:

“Burger King has concocted yet another way to have it your way: a gay pride burger.

“The Proud Whopper, as it’s called, comes wrapped in a rainbow colored wrapper with this inscription: ‘We are all the same inside.’ It will be sold through Thursday at one Burger King restaurant on San Francisco’s Market Street, that was at the heart of the route for last weekend’s 44th annual San Francisco Pride Celebration & Parade. . . .

“‘It showcases who we are as a brand,’ says Fernando Machado, senior vice president of global brand management at Burger King. ‘It shows how we, as a brand, believe in self-expression.’” 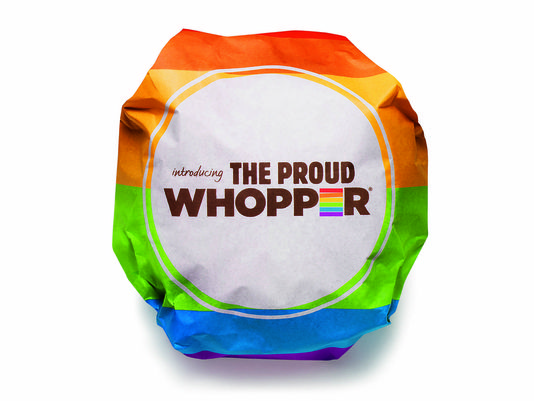 Not only is Burger King promoting an immoral lifestyle; they’re also promoting sexual practices that lead to diseases.

Before AIDS became the accepted acronym for a cluster on unidentified diseases, it was GRIDS: Gay-Related Immune Deficiency Syndrome.

Acquired Immune Deficiency Syndrome doesn’t explain how the disease was acquired, and that was one of the reasons GRIDS became AIDS. The scare back in the 1980s was that anybody could get AIDS based on the claim that “We are all the same inside.”

Dentists were wearing masks. There were warnings that we were all at risk. In reality, it was predominately homosexual men, multi-partner sexual partners, and intravenous drug users that were at risk. A number of innocent people did get AIDS, for example, hemophiliac Ryan White, but that was because of contaminated blood or a medical professional who had AIDS and passed it on to his patients.

Do you remember how the homosexual community got all Taliban on Chick-fil-A when one of the owners expressed his opinion on same-sexuality?

Did you see the company put out anti-homosexual slogans on their products?

Then there’s the illogic of same-sex sexuality. If all cows were same-sex oriented, there wouldn’t be any Whoppers. Same-sexuality is biologically counterproductive. You can’t get burgers if it’s Elton John and his same-sex partner who are being “proud” bulls.

It’s not what a person is on the inside; it’s what a person does on the outside. It’s the act of same-sexuality that’s a moral and rational problem.

The biggest problem is that the State has intervened to legitimize same-sexuality to the point that anybody who objects to it on principle can be sued, hauled into court, and forced to act contrary to their principled beliefs. Aren’t these people the “same inside,” and shouldn’t they enjoy the liberty not to be forced to act contrary to their beliefs?